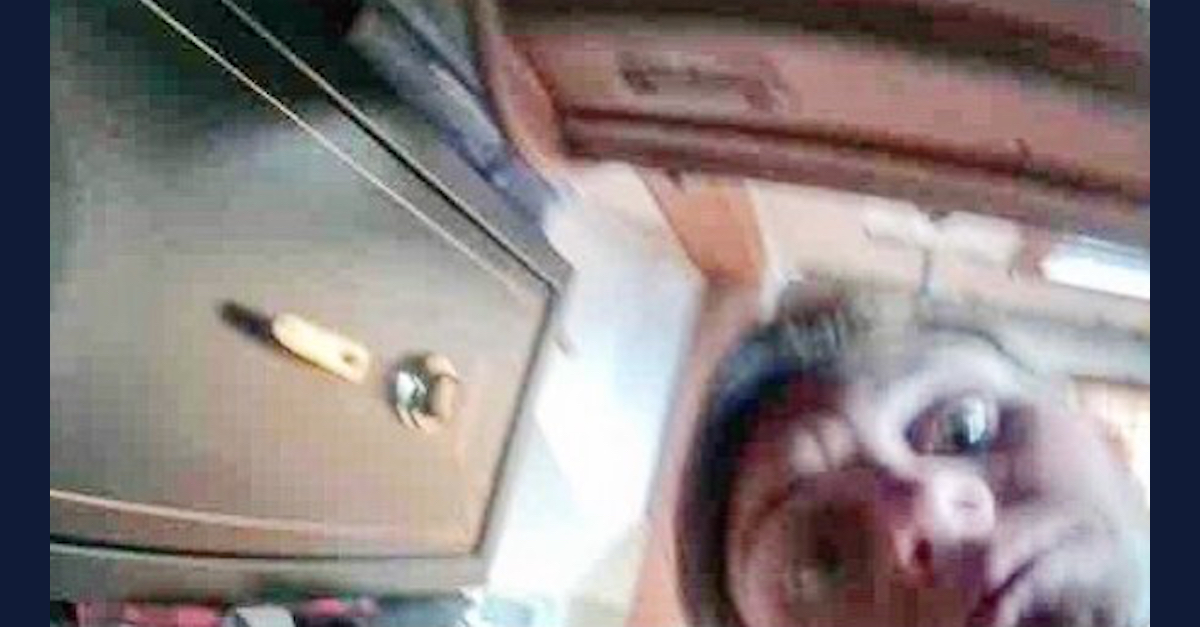 An upstate New York woman says an intruder made his way into her home over the weekend and was caught on video.

“Tonight on my way home I stopped at my moms and looked at my security camera feed from my phone,” Kat Grimes wrote in a public Facebook post on May 22, 2022. “I was shocked to find a face I do not recognize staring back at me.”

The homeowner went on to characterize the incident as “incredibly scary, invasive and truly surreal.”

Perhaps even more frightening for Grimes is that the unwanted visitor appears to have entered while she was there and getting ready for work–but she was not aware of him until several hours later.

But, as it turns out, their paths very nearly crossed.

“I was blow drying my hair,” she told Albany, N.Y. ABC affiliate WTEN. “I wouldn’t of heard him with a blow dryer on. When I saw the timestamp on it, I realized we crossed the same room in the same ten minutes.”

Fortuitously, at least in a relative sense, the home invader was caught by a security camera that Grimes had recently taken inside her house to charge. Before she left for work, she took the camera back outside.

The man himself appears to have been instrumental in the process of being caught in the act.

“He picked up the camera that was charging on my dining room floor and it snapped his image,” her Facebook continues. “I have no idea who this is – their intention or why this is happening.”

According to Albany, N.Y. NBC affiliate WNYT, she believes the man was likely watching her collect her cameras from outside of her house and used that small window of opportunity to make his way inside.

“I really didn’t believe what I was seeing,” Grimes told the TV station.

She is now pleading for her community to help solve the mystery.

“I lock my doors even when I am home – this person knew how to access AND hide in my home WITH ME INSIDE and go undetected,” her Facebook post requesting public help identifying the man says.

“No one I work with; I’m not on dating apps; I don’t have any weird people that I know of,” she told WTEN. “I can’t ID this man without the public’s help.”

Grimes went on to tell WNYT that she thinks the unknown man probably escaped through her basement because she later found an unlocked deadbolt that had been opened from the inside.

Aside from showing up-almost stealthily, unwanted, and unannounced, the man’s mission appears unknown.

“There doesn’t seem to be a motive,” she told WNYT. “Nothing was taken. Nothing was harmed–to my knowledge. So, just kinda left with a lot of unanswered questions at this point.”

He even left cash that was visible, Grimes said.

“What is the intention?” she asked rhetorically in comments to WTEN. “Someone came into my house in the same period of time, did not attack, did not take anything. It doesn’t make sense to me.”

New York State Police have been notified and are reportedly investigating.