‘He Pointed It Right at Them’: Video Shows Texas Police Shooting, Killing Armed Man Outside of Laundromat 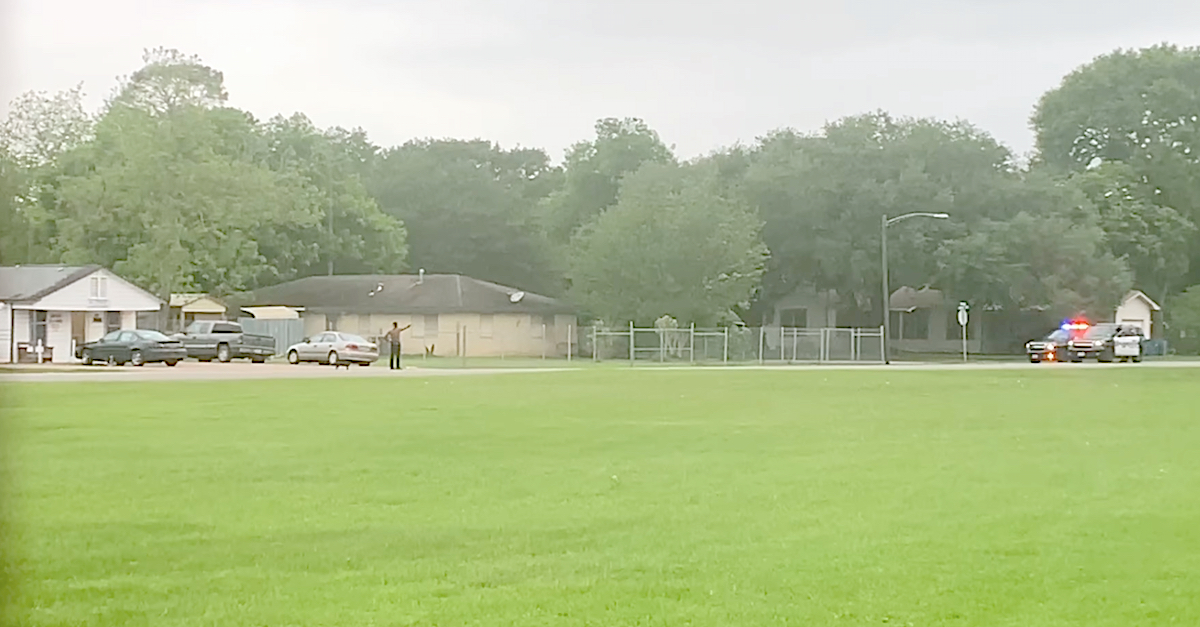 “Officer involved shooting in the 1700 block of 8th street,” Rosenberg Police Chief Jonathan White said on Twitter after things quieted down. “Scene is secure and there is no threat to the public.”

He noted that the Texas Department of Public Safety and the Fort Bend County District Attorney’s Office would be “conducting an investigation” and that “[f]urther details will be updated at a later time.”

“This is normal protocol in [our county] and best practice to request an independent and outside investigation,” the prosecutor’s office replied.

This is normal protocol in FBC and best practice to request an independent and outside investigation. https://t.co/LQzsZo5spT

The Rosenberg Police Department on Saturday identified the man they shot as Tory Casey, 41, of Rosenberg.

Houston CBS affiliate KHOU-TV reported what police later said in a press release: officers responded to the scene after receiving calls about a man shooting toward people in a laundromat. When officers arrived, a man fitting the description provided by callers was “shooting a gun in the air and at certain people,” the TV station said.

The chief said officers ordered the man to drop the weapon, but the man did not oblige. They eventually shot the man.

KHOU’s report and the subsequent police press release embedded above said the police “immediately rendered aid,” but the video shows a lapse between when the man was shot and when the police approached him — perhaps because observers said the suspect was “still moving” after he was shot and possibly still had a gun. The video shows the police were approximately five car lengths from the man when they opened fire. The video, two minutes and 53 seconds long, ends approximately 30 seconds after gunshots rang out and without anyone approaching the suspect on the ground.

The suspect died at the hospital, the police said. KHOU reported that the incident “may have stemmed from an argument” the suspect “had with his girlfriend in the laundromat.”

Casey’s fiancée has been identified as Rashida Ferguson. She told ABC13 that Casey lived with mental illness.

“I knew [police] had to [contain] the situation because other people were at risk, but they could have just stopped him,” she said. “They didn’t have to kill him. There were too many bullets. The second round was not called for, and they’re experts on shooting. This is their job.”

Witness David Romero told Houston NBC affiliate KPRC-TV that he heard gunshots which turned out to be real while he was watching a movie. He said he opened his back door to see the suspect pointing a gun around, shooting at a car which was leaving the area near the laundromat, and then shooting into the air. The suspect then removed his shirt, Romero told the TV station.

Another car pulled up, and Romero said the suspect pointed his gun at that car as well. That car also drove away.

Then the police arrived.

In a video Romero shared with several TV stations and which was made available in full on Facebook, observers can be heard saying they could see the suspect’s gun from a distance.

“It is — full size.  It’s a big — shiny silver from here,” someone — presumably Romero — says near the camera as the action unfolded in the distance.

“He keeps pointing it, man!” that same observer says of the suspect. “They’re gonna shoot his ass. You can tell he ain’t gonna drop it.”

The suspect raises his hand toward the officers — his arm fully outstretched toward a police vehicle. Approximately two seconds later, three shots rang out.

Though it’s unclear from the video who fired first, the volley appeared to those present to have emanated from the police.

The suspect dropped his arm but not immediately drop to the ground. Then, suspect moved his arm again — but it was not raised as high at it was the first time.

“Oh, my God!” the observer said as approximately a half-dozen more gunshots rang out.

Someone else nearby commented that the suspect was “still moving.”

“For now,” the primary observer said. “He dead.”

The video did not capture any of the communication between the police and the suspect.

Romero did not respond to a Law&Crime request to speak with him.

The Texas Penal Code says deadly force “is justified” in self-defense situations “when . . . the actor reasonably believes the force is immediately necessary to protect the actor against the other’s use or attempted use of unlawful force.”

Other laws allow actors to use deadly force to protect third parties who are facing the immediate risk of being seriously injured or killed.

Elsewhere, Texas law says peace officers are “justified in using deadly force against another when and to the degree the peace officer reasonably believes the deadly force is immediately necessary to make an arrest” and the officer “reasonably believes there is a substantial risk that the person to be arrested will cause death or serious bodily injury to the actor or another if the arrest is delayed.”

Various versions of the video are available online.

Houston ABC affiliate KTRK-TV provided an edited version of the video which freezes the action before the shots rang out and does not show the remainder of what occurred thereafter.

KPRC’s coverage, which contains some of the less intense video, is below: