Trump Struggled to Read the Constitution, Said It Was ‘Like a Foreign Language’: Book 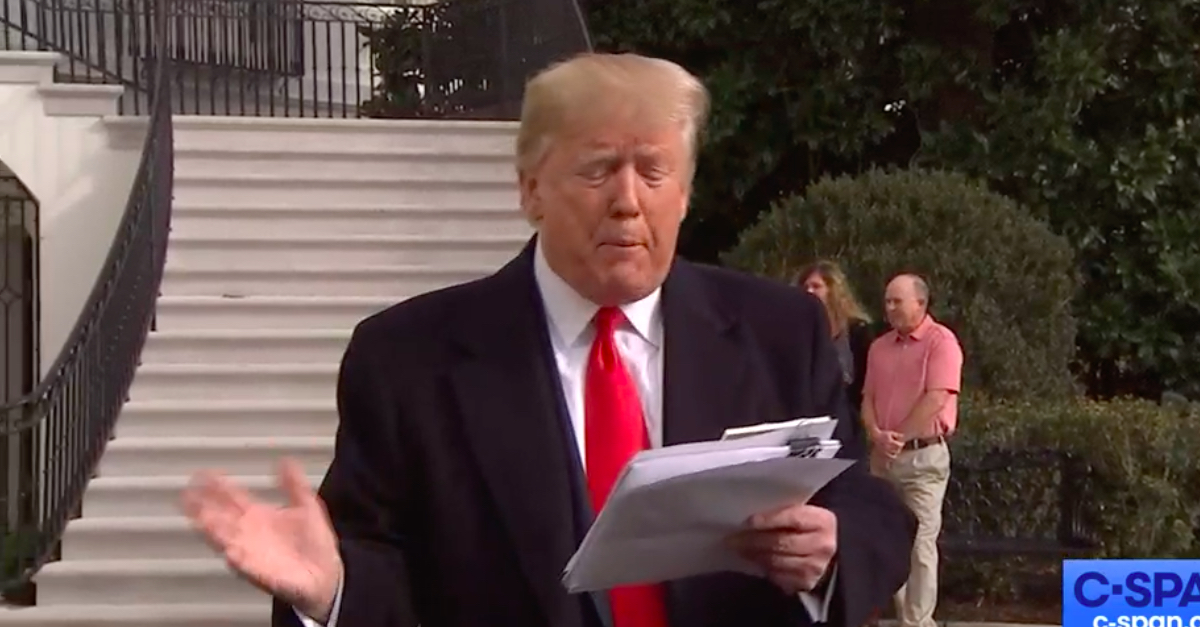 President Donald Trump struggled to read through a passage of the U.S. Constitution while filming a documentary produced by Alexandra Pelosi, according to a recent book written by Pulitzer Prize winning Washington Post reporters Philip Rucker and Carol Leonnig.

While seemingly self-inflicted, Trump tended to blame those missteps on others in the room with him—including the film crew.

“You know, your paper was making a lot of noise,” Trump complained of the script. “It’s tough enough.”

The following excerpt from A Very Stable Genius details an extended bit of grousing:

With LED lights on stilts in front of him, Trump took his seat. “You’re lucky you got the easy part,” Pelosi told him cheerfully. “It gets complicated after this.” But the president stumbled, trying to get out the words in the arcane, stilted form the founding fathers had written. Trump grew irritated. “It’s very hard to do because of the language here,” Trump told the crew. “It’s very hard to get through that whole thing without a stumble.” He added, “It’s like a different language, right?” The cameraman tried to calm Trump, telling him it was no big deal, to take a moment and start over. Trump tried again, but again remarked, “It’s like a foreign language.”

Pelosi, daughter of House Speaker Nancy Pelosi (D-Calif.) had set up the reading as part of a documentary titled The Words That Built America—which the book describes as a “conceit” premised on the idea that America’s “founding documents remained a unifying force for the nation’s factions” in the aftermath of the relatively ugly and decidedly divisive 2016 presidential election. Filming occurred in the White House Blue Room some six weeks after Trump was sworn in on the same document he reportedly struggled to read.

Former acting U.S. Solicitor General Neal Katyal described the president’s apparent lack of familiarity with the nation’s founding charter as “meta.” Trump has been denounced and condemned by critics of various ideological stripes throughout his political career for disrespecting and ignoring the U.S. Constitution in word and in deed.

Law&Crime previously reported on another controversial—and arguably more substantive—excerpt from the same book. According to Rucker and Leonnig, Trump pressured his former secretary of state Rex Tillerson to devise a workaround for and assault on the Foreign Corrupt Practices Act—the U.S. federal law which prohibits American businesses from bribing their way into the graces of potential foreign clientele.

Trump, of course, has already rubbished the book.

”Another Fake Book by two third rate Washington Post reporters, has already proven to be inaccurately reported, to their great embarrassment, all for the purpose of demeaning and belittling a President who is getting great things done for our Country, at a record clip,” the president tweeted over the weekend. “Thank you!”

The 45th president’s apparent stumbling over constitutional verbiage, however, is said to be on film. So, take those slams against the authors with a margarita rim’s worth of salt in this instance. And, for what it’s worth, Trump was eventually able to cut his segment once through without mangling the words.

“Every time he stumbled, he manufactured something to blame people,” another person in the room recalled. “He never said, ‘Sorry, I’m messing this up.’ [Other] people would screw up and say, ‘Ohhhh, I’m sorry.’ They would be self-effacing. He was making up excuses and saying there were distracting sounds.… He was definitely blaming everyone for his inability to get through it. That was prickly, or childish.” Though stiff, he eventually made it through without any errors.