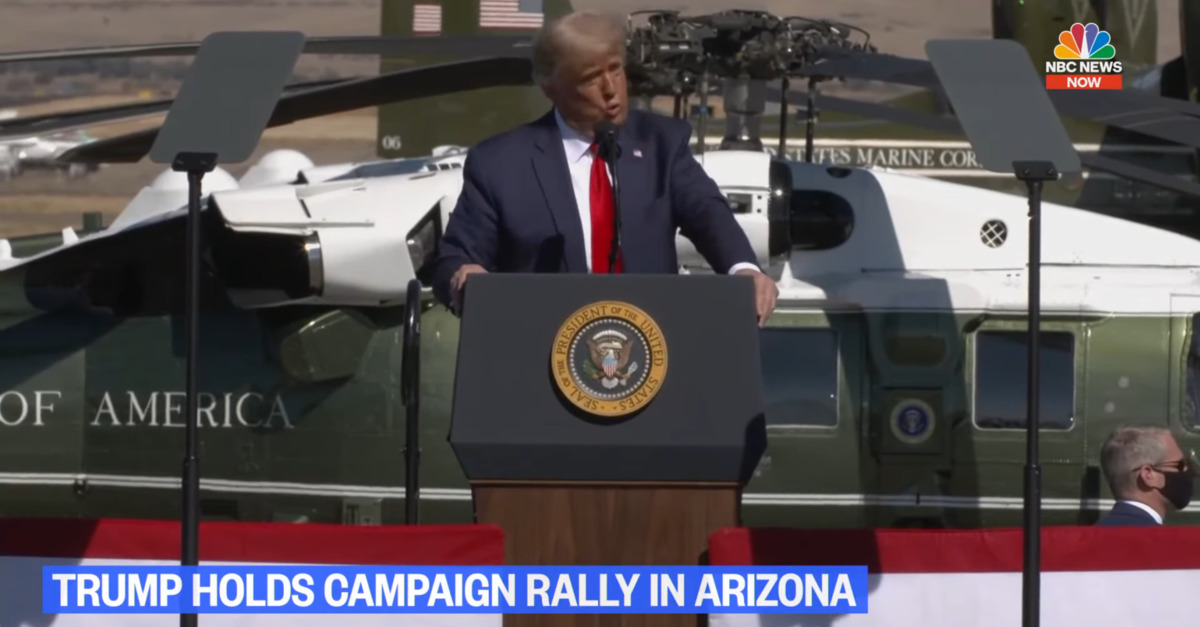 President Donald Trump dazzled a rally audience in Arizona on Monday by describing a scenario in which he could—-if he really wanted to do so, that is-—shake down a company like ExxonMobil for millions of dollars in campaign cash.

“Absolutely, sir,” Trump continued–using a mock voice apparently intended to reflect an obsequious oil industry CEO happy to engage in the transaction: “Why didn’t you–yes, would you like some more?”

The regaling tale of corruption was seemingly delivered as a sort of combined hypothetical, joke, and attack on his political opponents but several high-profile commentators took the president quite seriously, sharing a brief edit of the video.

“He just confessed to a crime,” wrote Center for American Progress President and CEO Neera Tanden in a series of tweets. “On TV. Some people who want to give Trump the benefit of the doubt – unearned in my opinion – say he’s saying he could shake people down but he hasn’t. I tend not to believe that. At all.”

Exxon even felt the need to respond.

We are aware of the President’s statement regarding a hypothetical call with our CEO…and just so we’re all clear, it never happened.

“We are aware of the President’s statement regarding a hypothetical call with our CEO…and just so we’re all clear, it never happened,” the company said from its official Twitter account.

Other tweets took the president to task along largely the same lines, noting that Trump was “describing an explicitly illegal bribe”:

One of the few conflict of interest laws applicable to the president is the anti-bribery law. It covers solicitation of a bribe. https://t.co/7l8tS8vsK1 pic.twitter.com/j1jp46fHKd

The context for Trump’s musing about the potential bribe was myriad.

(1) Joe Biden shouldn’t be allowed to run for office–presumably due to his oft-alleged mental decline; (2) if Trump were in Biden’s state he would be barred from running; (3) asking the audience to imagine “if Don Jr. had the problems of ‘Where’s Hunter'” and how the media would excoriate him; (4) lamenting all the things his “poor boy” has been through the past few years; (5) praising his daughter Ivanka Trump because “she sort of floats through life” and being “pretty amazing” in contrast to his eldest son; (6) additionally praising his other adult son Eric Trump for being a good businessman; (7) complaining about the media’s attacks on his children even though he restricts them “from doing anything” like building hotels in Saudi Arabia; (9) dismissing Biden’s fundraising advantage; (10) saying he “would be the greatest fundraiser in history” but he doesn’t want to.

“But you know what?” the president continued. “I don’t want to do that. Because if I do that, I’m totally compromised. Because when they call me–you know, you’re a loyal person–and what happens is, hey, you know, you’ll do things.”