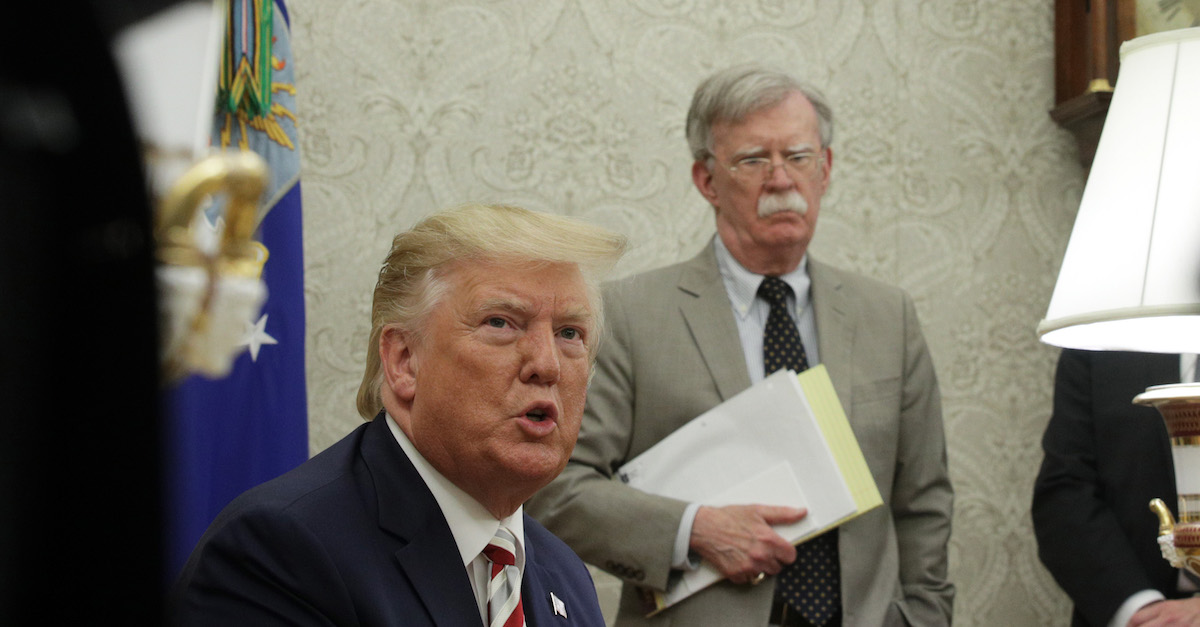 The Wall Street Journal on Wednesday published an excerpt of former Trump National Security Advisor John Bolton’s controversial book under Bolton’s byline. The book, which the Trump administration is suing over, had some unflattering things to say about President Donald Trump and Trump administration figures regarding their approach to foreign policy and China.

Here’s are five of the most eye-popping details of the excerpt.

1. Bolton claims that, during a meeting with China’s President Xi Jinping, Trump talked in passing about the end to two-term limits on U.S. presidencies.

John Bolton’s telling of the Dec. 2018 G20 summit in Buenos Aires, Argentina juxtaposed Chinese leaders’ meticulous preparation with Trump’s trademark off-the-cuff delivery. According to Bolton, Trump’s “ad-libbed” dialogue included the suggestion that unspecified people were saying two-term limits on presidencies should be repealed in Trump’s case. What’s more, per Bolton, Trump “nodded approvingly” when Xi said the U.S. had too many elections:

In Buenos Aires on Dec. 1, at dinner, Xi began by telling Trump how wonderful he was, laying it on thick. Xi read steadily through note cards, doubtless all of it hashed out arduously in advance. Trump ad-libbed, with no one on the U.S. side knowing what he would say from one minute to the next.

One highlight came when Xi said he wanted to work with Trump for six more years, and Trump replied that people were saying that the two-term constitutional limit on presidents should be repealed for him. Xi said the U.S. had too many elections, because he didn’t want to switch away from Trump, who nodded approvingly.

At one point, notorious hawk Bolton referred to the U.S. Treasury Secretary as a “panda hugger,” a slur that seemingly suggests Steven Mnuchin either sympathized with or was complicit in propping up Communist Chinese economic policy:

3. Bolton said that China “perked up and smiled” when they found out Jared Kushner would be involved in trade war negotiations.

The president’s son-in-law made a cameo appearance in the excerpt. Bolton said that eventually the U.S.-China discussion in Buenos Aires shifted from two-term limits to substantive discussions about tariffs. Bolton claimed that China’s leadership “perked up and smiled” when they found out Jared Kushner would be involved in “deal-making”:

Trump came close, unilaterally offering that U.S. tariffs would remain at 10% rather than rise to 25%, as he had previously threatened. In exchange, Trump asked merely for some increases in Chinese farm-product purchases, to help with the crucial farm-state vote. If that could be agreed, all the U.S. tariffs would be reduced. It was breathtaking.

Trump asked Lighthizer if he had left anything out, and Lighthizer did what he could to get the conversation back onto the plane of reality, focusing on the structural issues and ripping apart the Chinese proposal. Trump closed by saying Lighthizer would be in charge of the deal-making, and Jared Kushner would also be involved, at which point all the Chinese perked up and smiled.

Bolton claimed that on June 29, 2019 during the G20 summit in Osaka, Japan, Trump sat down to talk trade war with Xi and—again—brought up U.S. elections.

Whether Xi meant to finger the Democrats or some of us sitting on the U.S. side of the table, I don’t know, but Trump immediately assumed that Xi meant the Democrats. Trump said approvingly that there was great hostility to China among the Democrats. Trump then, stunningly, turned the conversation to the coming U.S. presidential election, alluding to China’s economic capability and pleading with Xi to ensure he’d win. He stressed the importance of farmers and increased Chinese purchases of soybeans and wheat in the electoral outcome. I would print Trump’s exact words, but the government’s prepublication review process has decided otherwise.

Notably, this was the month before Trump’s infamous July 25, 2019 with Ukrainian President Volodymr Zelensky, during which Trump asked Zelensky to investigate the current presumptive Democratic nominee Joe Biden and his son Hunter Biden. That call, of course, was the subject of the whistleblower complaint that led to impeachment and ultimately impeachment acquittal. Bolton never testified.

Bolton said that he couldn’t think of a major Trump decision that wasn’t “driven by” 2020 reelection considerations.

“Trump’s conversations with Xi reflected not only the incoherence in his trade policy but also the confluence in Trump’s mind of his own political interests and U.S. national interests,” Bolton wrote. “Trump commingled the personal and the national not just on trade questions but across the whole field of national security. I am hard-pressed to identify any significant Trump decision during my White House tenure that wasn’t driven by reelection calculations.”

5. In closing, Bolton said that Trump’s presidency is grounded in only one thing: a whim, not a plan.

The Trump presidency is not grounded in philosophy, grand strategy or policy. It is grounded in Trump.