The 19th day of June is the day enslaved African Americans in Texas learned, more than two and a half years after then-President Abraham Lincoln‘s Emancipation Proclamation, that they were, indeed, legally free. Juneteenth is a day of remembrance of the shattered bonds of legalized slavery, and it carries a critical meaning in the immediate wake of massive worldwide protests over the deaths of Black men and women at the hands of American police officers in various jurisdictions.

President Donald Trump and First Lady Melania Trump marked the day with a short message. It did not go over well.

“Juneteenth reminds us of both the unimaginable injustice of slavery and the incomparable joy that must have attended emancipation,” the message reads in part.  “It is both a remembrance of a blight on our history and a celebration of our Nation’s unsurpassed ability to triumph over darkness.”

The problem is that the last three words in the last sentence quoted above were issued in boldface type on a graphic attached to the White House website and tweeted by the official White House Twitter account. 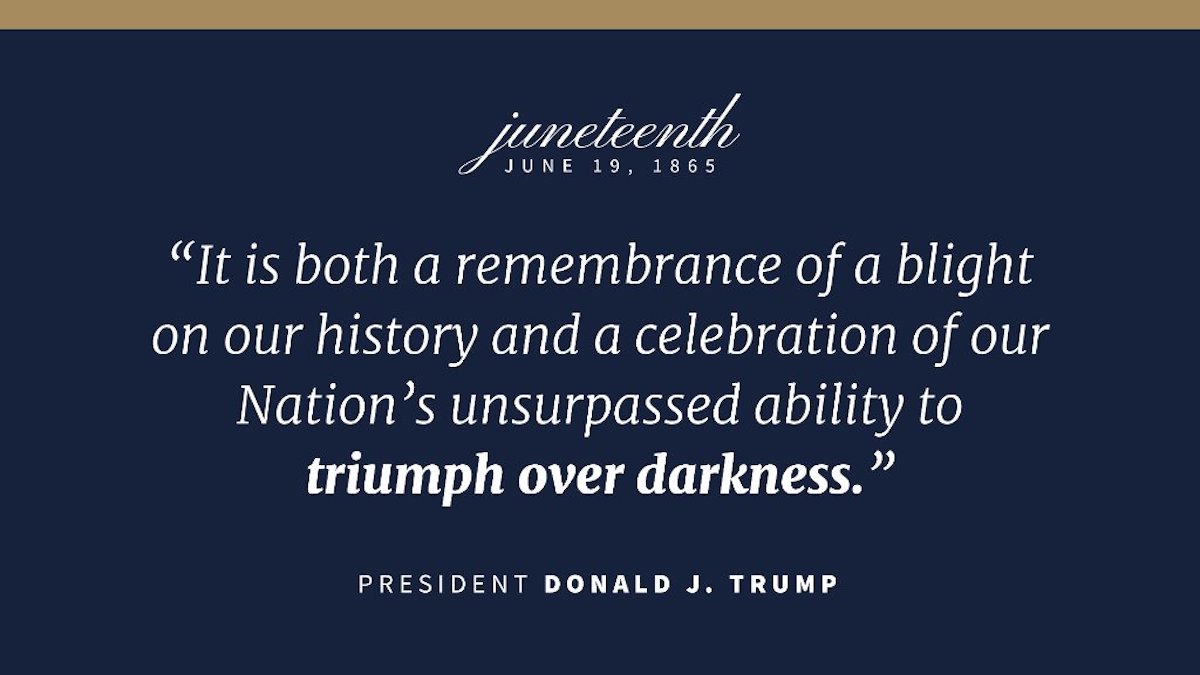 The upshot was an emphasis on the words “triumph over darkness.”  A judgement went down in many courts of public opinion that the White House and/or the president were engaging in something which bordered somewhere between blind negligence and boldfaced racism.

“triumph over darkness”? A touch of subliminal racism there, Donny?

“We all know EXACTLY how he feels about Black people,” wrote another.

19/10 he never heard of Juneteenth until called out about the rally 🙄. Words ring hollow, actions speak clearly and loudly. We all know EXACTLY how he feels about Black people. Our “triumph over darkness” will come in November when his ass is voted out! https://t.co/8PnOfM8H1m

“You don’t think they could have thought through the phrase ‘triumph over darkness’?” said yet another.

You don’t think they could have thought through the phrase “triumph over darkness”? https://t.co/WGb2yb2VlU

The complaints steadily rolled in.

Did the WH, which has been accused of being at least racially insensitive, if not actually racist really bold-face “triumph over darkness”? And, did I hear a dog whistle? https://t.co/lj9dEln8MQ

“It is both a remembrance of a blight on our history and a celebration of our Nation’s unsurpassed ability to triumph over darkness.” Is that a black joke. Terrible choice of words no matter how you look at it https://t.co/3VoveanWZb

” triumph over darkness”? Seriously this could have been worded in a way that doesn’t sound like an alt right dog whistle. pic.twitter.com/YHjH274COH

Triumph over darkness, you say? No subliminal message there…

The White House just tweeted that Juneteenth celebrates the “triumph over darkness”. Probably a coincidence.

This is not the first time the Trump Administration or its executive agencies have been accused of what might be politely called very poor choices of words. The Department of Homeland Security was shredded in 2018 for a title which many believed employed Nazi allegories. Trump himself Tweeted in 2016 a graphic containing a Star of David which accused Hillary Clinton of corruption.

Back to 2020, though, here is the full statement from POTUS and FLOTUS on Juneteenth:

The First Lady and I send our warmest greetings to those celebrating Juneteenth this year.

On this day 155 years ago, African Americans in Texas first heard the righteous and long-overdue words of General Order Number 3: “All slaves are free.” These words confirmed for still-enslaved people in Texas that the Union Army would enforce and defend their freedom, announced nearly 3 years earlier by President Abraham Lincoln in his Emancipation Proclamation.

Juneteenth reminds us of both the unimaginable injustice of slavery and the incomparable joy that must have attended emancipation. It is both a remembrance of a blight on our history and a celebration of our Nation’s unsurpassed ability to triumph over darkness. That ability is rooted in the fundamental goodness of America—in the truths upon which we, as a Nation, declared an end to our status as the subjects of a monarch and emerged as a free and independent people: that all men are created equal by the hand of God, endowed by our Creator with the right to life, liberty, and the pursuit of happiness. These words form the heart of what Reverend Dr. Martin Luther King, Jr., called the “promissory note to which every American was to fall heir.” The celebration of Juneteenth marks an important milestone in the hard-fought journey to make good on that promise for all Americans.

This Juneteenth, we commit, as one Nation, to live true to our highest ideals and to build always toward a freer, stronger country that values the dignity and boundless potential of all Americans.