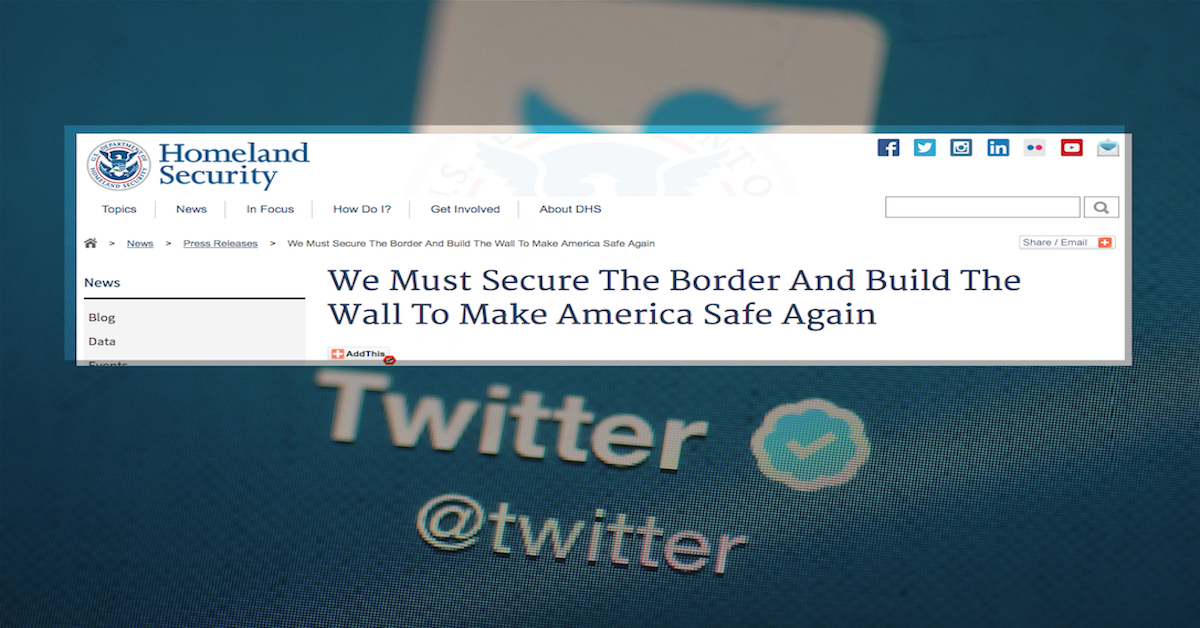 The Department of Homeland Security is under fire after social media users noticed the agency released an article with a 14-word headline that appears to mirror an infamous 14-word slogan popular among white supremacists and neo-Nazis.

A (very) brief bit background. The so-called “14 words” refer to the phrase, “We must secure the existence of our people and a future for white children.” The phrase was coined by white supremacist David Lane, while serving a 190-year federal prison sentence for his role in multiple armed robberies and the murder of Jewish talk show host Alan Berg.

The “14 words” are frequently used in conjunction with the number 88 because “H” is the eighth letter of the alphabet and therefore 88 becomes “HH” which stands for “Heil Hitler.” According to dictionary.com, “1488, along with other variations, is a secret code used by neo-Nazis and other white supremacists to identify and signal their ideology.”

Various permutations of the phrase–along with various other 14-word-long statements–are considered coded signals for one white supremacist to recognize the other. The use of such phrases could be likened to the racist dog whistle.

DHS released the article in question on February 15 of this year. That article is titled:

Twitter user Laurie Voss drew attention to the article after seeing a retweeted post of the article’s headline on his own timeline.

This is an actual story on an official government website with a 14-word headline starting with “we must secure”. This is not an accident. There are actual Nazis-who-call-themselves-Nazis at DHS. https://t.co/Q01TRRpNaI

Voss’ tweet went viral in a matter of hours before being picked up and retweeted by the Huffington Post’s national reporter Christopher Mathias. Mathias posted the following tweet:

The “14 words” is a white supremacist slogan that goes “We must secure the existence of our people and a future for white children.”

New DHS press release is also 14 words, and is titled: “We Must Secure The Border And Build The Wall To Make America Safe Again” https://t.co/1cXGUqlwPq

Voss also noted other possible issues with the article aside from the allegedly Nazi-reminiscent headline, identifying 14 distinct points in the article as well as the use of 88 as the denominator in a fraction:

There are 14 points in the article, and the final point contains the number “88” for no good reason — 88 is also a Nazi dog whistle for “Heil Hitler”. https://t.co/WLT3CEqfUw There is absolutely no doubt now that this article is intentionally a signal to Nazis. pic.twitter.com/njS5MDMNIr

The article does in fact contain 14 distinct sets of claims; 13 of which are bullet-pointed–one of which is not. And even skeptical Twitter users were in agreement about the following line, “On average, out of 88 claims that pass the credible fear screening, fewer than 13 will ultimately result in a grant of asylum.”

Law&Crime reached out to the Department of Homeland Security. In an emailed reply to a series of questions, DHS declined to comment on the record.