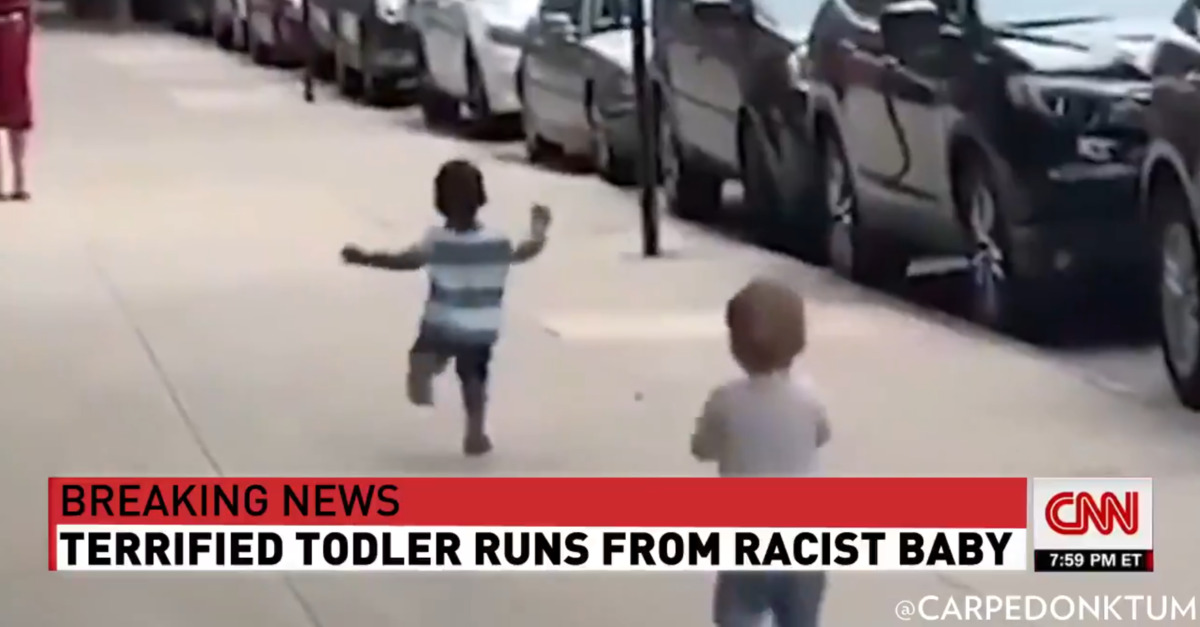 “Terrified todler [sic] runs from racist baby,” the faux CNN chyron reads as a Black child runs away from a white child in an edited version of a clip that went viral last year. “Racist baby probably a Trump voter.”

In the original version, the children are clearly playing together, laughing and running to and from one another on a city sidewalk.

The edited video shared by the 45th president appears to be an attempt at media criticism–insinuating that corporate media outlets gin up racial strife where none exists by creating whole cloth narratives and misrepresenting the truth. The complaint is not new on the right; Trump has, throughout his presidency, mainstreamed such fringe and extreme ideas. Friday’s video is perhaps best understood in this context.

As the altered footage, using a poor imitation of CNN’s “BREAKING NEWS” lower-third graphics, recedes, the clip shows the full context of the video–offering the Trumpworld view of reality as something of a corrective for the alleged fake news media.

Criticism of the video was widespread and, most importantly, one of the children’s parents, took advantage of the user-friendly Digital Millennium Copyright Act (DMCA) to quickly submit a copyright claim alleging infringement of their intellectual property.

Jukin Media represents the parent who owns the original video and issued at least two DMCA takedown notices on their behalf–one to Facebook and one to Twitter.

As of this writing, Facebook had complied with the takedown notice over the alleged copyright violation. Twitter, on the other hand, had not taken the video down–but the company did mark it as “Manipulated media.”

“Neither the video owner nor Jukin Media gave the President permission to post the video, and after our review, we believe that his unauthorized usage of the content is a clear example of copyright infringement without valid fair use or other defense,” a Jukin Media representative told CNN Business on Friday.

Facebook spokesperson Andy Stone confirmed the video’s deletion: “We received a copyright complaint from the rights holder of this video under the Digital Millennium Copyright Act and have removed the post.”

Users who have had their content removed via takedown notices can also appeal such decisions and have their posts restored if an investigation determines that no copyright violation has actually occurred. Trump’s use of the video could qualify as transformative use under the Copyright Act but it’s unclear if he has even appealed Facebook’s action.