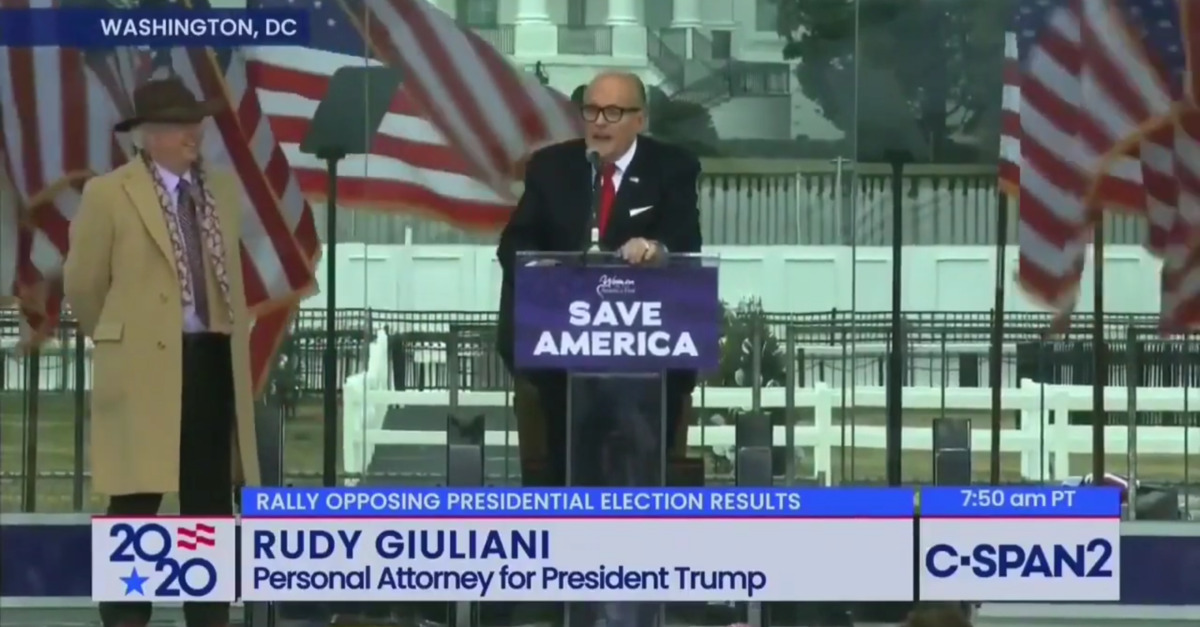 The New York State Bar Association (NYSBA) is looking into whether Rudy Giuliani “should be removed from the membership rolls” over his support for the pro-Trump mob that stormed the U.S. Capitol in an extraordinary fit of deadly violence last week.

“If we’re wrong, we will be made fools of, but if we’re right a lot of them will go to jail,” Giuliani told the crowd of President Donald Trump‘s adoring supporters some three hours and twenty minutes before the Capitol was breached. “Let’s have trial by combat.”

The NYSBA suggested Giuliani’s words were a violation of their bylaws–which prohibit members from fomenting unlawful revolution.

[N]o person who advocates the overthrow of the government of the United States, or of any state, territory or possession thereof, or of any political subdivision therein, by force or other illegal means, shall be a member of the [NYSBA].

“Giuliani’s words quite clearly were intended to encourage Trump supporters unhappy with the election’s outcome to take matters into their own hands,” the group said in a Monday press release. “Their subsequent attack on the Capitol was nothing short of an attempted coup, intended to prevent the peaceful transition of power.”

According to the NYSBA, many of the group’s 74,000-plus members have filed several hundred complaints against the 45th president’s longtime friend, political ally and attorney since he took first chair in mounting an avalanche of long-shot legal challenges to the results of the 2020 election beginning in early November.

The organization cast Giuliani’s advocacy on behalf of Trump as a “baseless” effort to “cast doubt on the veracity of the 2020 presidential election” and “overturn its legitimate results.” The NYSBA also noted that the former mayor of New York’s legal filings lacked “any evidentiary basis whatsoever” and said they “were appropriately dismissed by the courts in which they were brought.”

Drawing a direct line between the Trump camp’s months-long, dead-end legal efforts and last Wednesday’s Capitol attack, the expulsion investigation comes in the context of an ongoing investigation focused on those extant election-related complaints.

“As the nation’s largest voluntary state bar association, NYSBA has a responsibility to defend and protect the rule of law,” the group’s press release continues. “Based on these complaints, and the statement Mr. Giuliani uttered shortly before the attack on the Capitol, NYSBA President Scott M. Karson has launched an inquiry pursuant to the Association’s bylaws to determine whether Mr. Giuliani should be removed from the membership rolls of the Association.”

Last Wednesday’s violence left at least five people dead and several rooms in the U.S. Capitol Complex in shambles. Members of the pro-Trump have variously been described as insurrectionists, fascists and terrorists; multiple of the alleged Capitol sackers were adherents of the QAnon conspiracy theory. U.S. Attorneys across the country have announced investigations into the participants and counter-terrorism-focused authorities are playing a prominent role in some of those investigations. To date, upwards of 120 people who took part in the unprecedented attack on the national seat of government have been arrested or identified via their social media profiles.

Suspected of playing an outsized role in the violence are current and former members of the military and law enforcement–with whom Giuliani, himself the former U.S. Attorney for the Southern District of New York (and therefore a former member of the law enforcement community), and Trump have both cultivated dedicated bases of support.

Representative Pramila Jayapal (D-Wash.) remarked upon the confluence of law enforcement and the pro-Trump mob over the weekend:

The lack of security at the Capitol is not an accident. It is very clear to me that there were breaches of our law-enforcement agencies. The fact that there were no barriers, that they were essentially allowed in. And again, the discrepancy of what would have happened if these had been peaceful Black Lives Matter protesters … Believe me, they would not have been anywhere near that building. And there would have been a lot of arrests.

During the 2020 Republican National Convention, Giuliani railed against then-candidate and current President-elect Joe Biden as a “Trojan horse” for “pro-criminal, anti-police” policies.

At least two Capitol police officers died in the aftermath of the attack. One of those officers, Brian D. Sicknick, died after he was beaten in the head with a fire extinguisher by a rioter. Video footage shows another officer from an indeterminate agency of being beaten by members of the MAGA mob with the staff of American flags. Capitol Police Officer Howard Liebengood died by suicide on Saturday.

Notably, however, the NYSBA’s ultimate decision will not have any direct bearing on whether Giuliani will be able to practice law in New York State. The NYSBA is a private and voluntary organization. The group does not license attorneys in New York; that task is left to the New York Board of Bar Examiners and the Appellate Division of the New York State Supreme Court–with the latter group taking sole responsibility for attorney disbarment proceedings.

Giuliani’s own stature in the Empire State makes the NYSBA’s decision all the more devastating and newsworthy.

As New York City’s outgoing mayor in the aftermath of the 9/11 al-Qaeda attacks on the World Trade Center and the Pentagon, Giuliani quickly became the subject of euphemistic hagiography and was, for several years thereafter, referred to as “America’s Mayor.”

“Giuliani will be provided due process and have an opportunity – should he so choose – to explain and defend his words and actions,” the voluntary organization said. “This decision is historic for NYSBA, and we have not made it lightly. We cannot stand idly by and allow those intent on rending the fabric of our democracy to go unchecked.”