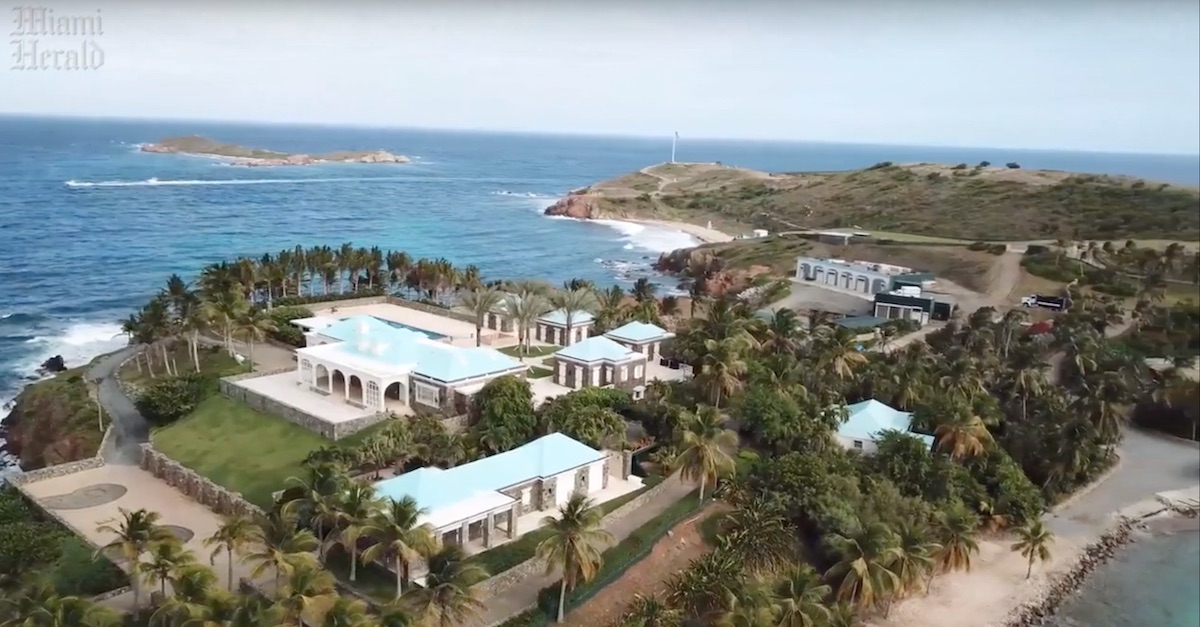 Jeffrey Epstein’s estate can’t pay the electric bill, the executors of the estate told the Superior Court of the Virgin Islands, St. Thomas & St. John Division. Darren K. Indyke and Richard D. Kahn say that government-imposed criminal-activity liens on the estate have created an untenable situation that needs to be remedied now.

The executors of the deceased mega-millionaire pedophile’s estate asked the court to smack down the criminal-activity liens so that the estate can function administratively. The filing began by attempting the convey the seriousness of the situation:

The crisis for the Estate envisaged by the Emergency Motion has unfortunately come to pass: prevented by the Government’sLiens from paying the Estate’s bills as they come due, the Co-Executors have had returned for “insufficient funds” multiple payments for upkeep of the Estate’s properties (including electric bills and pest-control services), been unable to pay the salaries of caretakers for the Estate’s residences in Florida, New Mexico, and New York, been prevented from preserving or selling Estate property that requires regular maintenance, including aircraft and other vehicles, and can no longer pay for the defense of the twenty-two (22) lawsuits pending against the Estate arising from claims of sexual abuse by Mr. Epstein, including the civil forfeiture acton asserted by the Government as the basis for the imposition of the liens.

The filing also lamented that the liens are jeopardizing the victims’ compensation fund the estate wants to execute so that sexual abuse claims against the late accused child sex-trafficker can be settled confidentially. They said the current situation poses a “grave risk” to that endeavor.

“[T]he Liens will continue to cause serious harm to the Estate, which is accelerating daily at an alarming rate,” the filing continued.

The Epstein estate then bullet-pointed a number of payments that it failed to make, including electric bills. The co-executors can’t even sell a helicopter, they said. 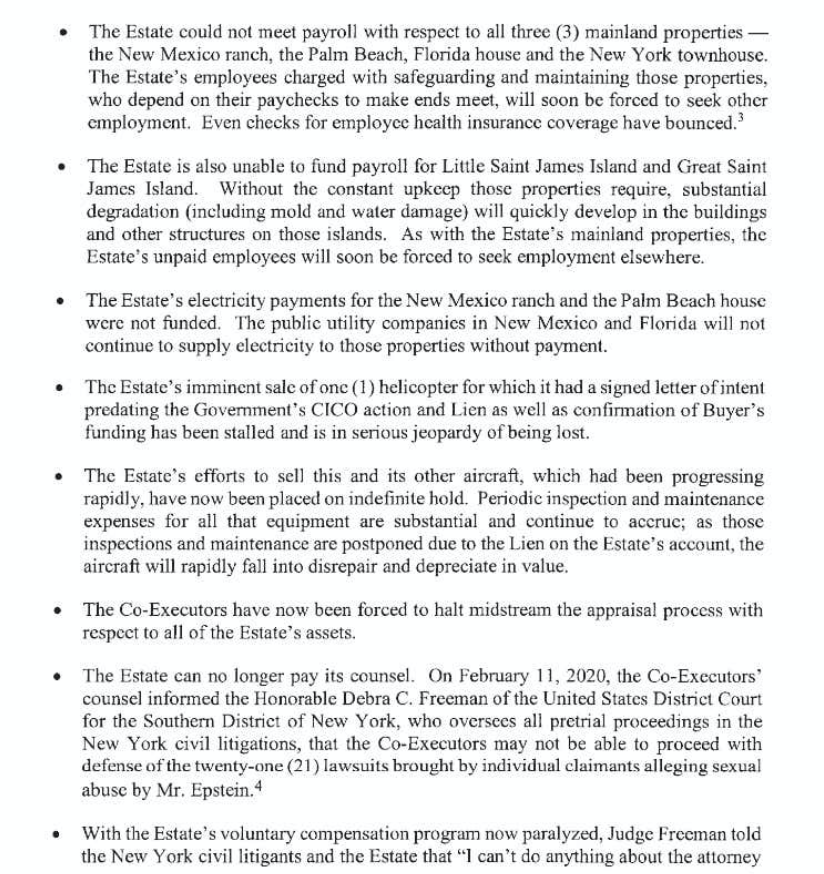 The Thursday filing comes not long after blistering filings from Virgin Islands Attorney General Denise George, whom the Epstein estate basically says has been tormenting them. In one filing, George moved to broaden an enforcement against Epstein’s estate by adding the dead pedophile’s Southern Trust Co. as a co-defendant for “fraudulently obtaining benefits from the government of the Virgin Islands in violation of its laws and regulations and as part of the alleged Epstein enterprise.”

“My Office has been clear that it is important for Jeffrey Epstein’s victims to have access to an expedited, non-public claims process for those who wish to participate, but that the process must be fair, just, and independent,” George said in a statement. The attorney general went on to criticize the proposed victims’ compensation fund:

The victims’ compensation fund proposed by the Estate does not meet those standards. The Attorney General’s Office has opposed the approval of the fund as currently proposed because it lacks fairness, accountability, impartiality and sensitivity to victims at a level they deserve. The design and administration of the fund must be fully independent of the Estate, and the administrative costs should be limited and transparent. Further, victims who have not yet come forward or who may not wish to use the fund must be supported and protected, with funds for counseling and for their claims, too. Pursuant to my responsibility to the laws of the Virgin Islands, there must be full accountability, not only of the Estate, but those who participated in, facilitated, and covered up Epstein’s crimes.

In a letter, George said that the Epstein estate’s “executors are directly associated with entities that are defendants” in her office’s ongoing criminal complaint and that they “allegedly facilitated or participated in Epstein’s criminal activity.” Such people, George argued, “should play no role” in the victim compensation process.

“[T]he program administrator [would] have full authority to evaluate and set claim amounts [and] the fact that the administrators were chosen by, advised by and would be paid handsomely by the Estate,” George continued.

And George said the estate’s request that criminal-activity liens be vacated is a no-go.

“The Court should deny the Co-Executors’ request for a judgment extinguishing the Government’s Criminal Activity Liens because the Court has no authority to grant this relief and the arguments the Co-Executors make are legally incorrect and misleading,” George said. “Regardless of the [Epstein estate executors] arguments, the law is clear that the Government’s Criminal Activity Liens are enforceable against the Epstein Estate.”

The Epstein estate, on the other hand, is begging the court to unfreeze funds.

You can read the filing below.