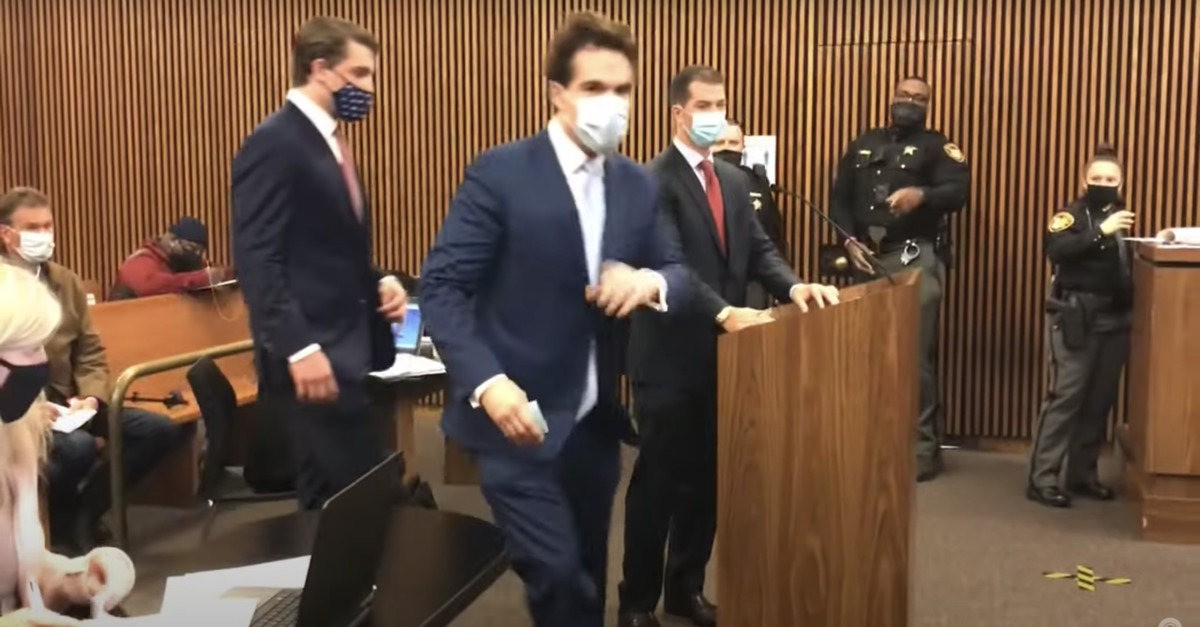 Conservative conspiracy theorists and operatives Jack Burkman, 56, and Jacob Wohl, 24, pleaded guilty on Monday to one felony count of telecommunications fraud over a series of robocalls with false messages intended to dissuade Black voters from participating in the 2020 general election.

They now face up to one year behind bars.

Charges were leveled against the pair in October 2020, after their group, Project 1599, placed several thousand phone calls to select area codes across the country – with significant populations of color – that spread misinformation about mail-in voting. In Cleveland alone, prosecutors said, some 8,000 calls targeted voters, according to Cleveland.com. Those numbers were lated dialed down to some 3,500 in Ohio – part of roughly 85,000 made nationally.

“Mail-in voting sounds great,” a woman on one of the calls said. “But did you know that if you vote by mail, your personal information will be part of a public database that will be used by police departments to track down old warrants, and be used by credit card companies to collect outstanding debt? The CDC is even pushing to give preference for mail in voting to track people for mandatory vaccines.”

Both of those claims were completely false and fabricated.

The calls also warned listeners that should not be “BS’d into giving [their] private information to the man.”

At the time, Burkman and Wohl were charged with eight counts of telecommunications fraud and seven counts of bribery by the Cuyahoga County Prosecutor’s Office. Both defendants initially pleaded not guilty and were released on bond set at 10-percent of $5,000 by Cuyahoga County Judge Timothy McCormick.

The case was later assigned to Judge John D. Sutula, who oversaw the plea agreement reached between the defense and prosecutors.

According to Cleveland.com, Assistant Cuyahoga County Prosecutor James Gutierrez said the defendants agreed to pay a maximum fine of $2,500 apiece over the robocalls. Additionally, the prosecution dismissed the outstanding 14 additional counts against the duo.

According to the Daily Beast, the two initially denied being behind the robocalls.

Those calls, which featured in heavily Democratic areas across the country, attracted legal attention both civil and criminal.

Law&Crime has extensively reported on a lawsuit filed by the National Coalition on Black Civic Participation in October 2020.

And, in addition to Ohio, prosecutors in Michigan, Illinois, and Pennsylvania launched inquiries into the calls. The New York Attorney General’s Office also went after the defendants civilly to the tune of $2.75 million. Additionally, the Federal Communications Commission suggested levying a fine of over $5.1 million – the largest fine ever assessed in an anti-robocalling enforcement action up to that point.

Eventually, Burkman and Wohl would own up — under oath — to hiring the vendor who made the calls.

The defendants were allowed to change their pleas during Monday’s hearing via Zoom teleconferencing software by Judge Sutula. Sentencing in their case is currently slated for Nov. 29, 2022.

Law&Crime reached out to the Cuyahoga County Prosecutor’s Office for additional details and comment.