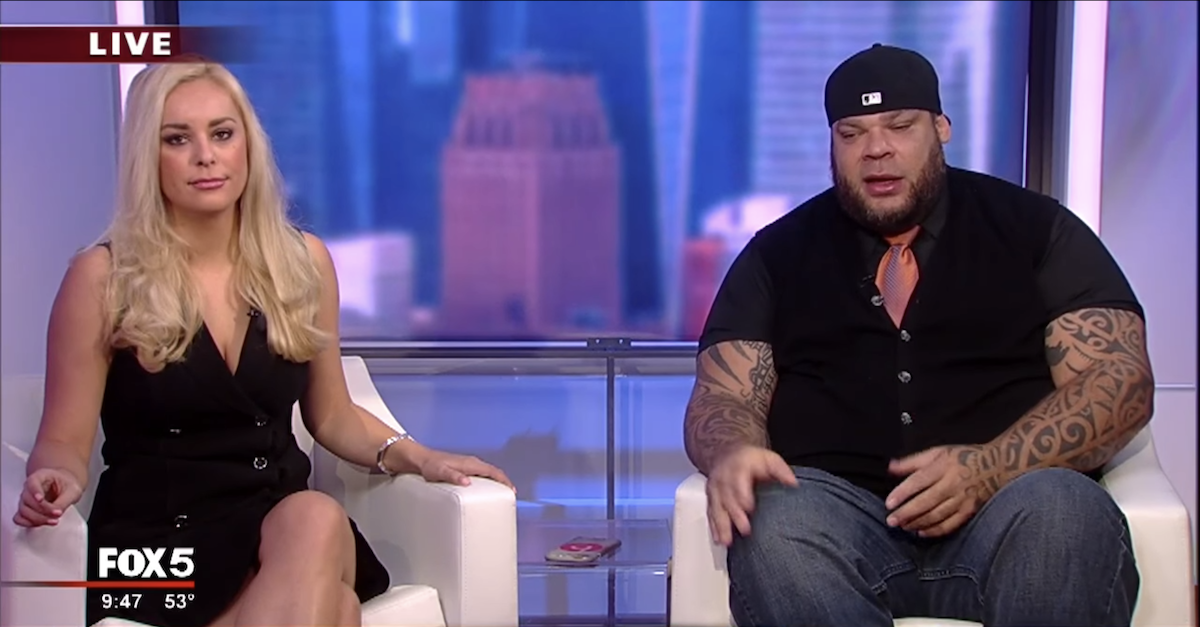 Court papers filed Tuesday by Fox News Network, LLC may allow the media conglomerate to raise serious legal defenses concerning the veracity of evidence available to support Britt McHenry‘s claim that she was was sexually harassed by her former Fox Nation co-host George Murdoch (a.k.a. the wrestler “Tyrus”). But McHenry’s attorney says she’s been forthright about her claims and “has nothing to hide.”

McHenry sued the network and several of its executives, including Watters’ World executive producer Jennifer Rauchet, on claims that Murdoch (a.k.a. “Tyrus”) sent her a string of explicit text messages and that the company subsequently retaliated against her when she complained. A judge already ruled that Murdoch’s “communications, as pled, are readily construed to reflect sexual advances and propositions, albeit unusually crude and clumsy ones, towards” McHenry.

However, the phone which contained those messages is now apparently “lost.” Per a Fox News amended answer filed Jan. 19 in U.S. District Court for the Southern District of New York, the network denied “that the text messages Plaintiff refers to are complete or accurate” because McHenry claimed she “lost her phone before filing” the case:

Answering further, Fox Defendants state that counsel for Plaintiff disclosed for the first time on January 4, 2021 that Plaintiff lost the phone she used to text with Tyrus at some point before August 2019. By Plaintiff’s counsel’s representation, Plaintiff lost her phone before she filed this lawsuit and before she submitted what she claimed to be an accurate representation of 5,156 text messages she exchanged with Tyrus (“text log”) that she had provided to her attorneys from her phone to an independent investigator. In light of Plaintiff’s late disclosure that she lost the phone, Fox Defendants have not authenticated or verified the accuracy or completeness of the text log provided by Plaintiff and now may not be able do to so. Indeed, the Fox Defendants may not be able to verify whether messages were deleted from Plaintiff’s phone prior to the creation of the text log or whether text messages were altered before being placed on the text log. Thus, Fox Defendants do not concede in any way that the text log is complete or accurate.

Fox’s lawyers say the claim that the phone was “lost” is even more egregious given McHenry’s statements in earlier court documents that she would provide the phone for a “forensic examination.” Indeed, McHenry’s “offer[] to have a forensic expert examine her cell phone” was oft repeated in court records filed by her law firm and has been previously publicized.

“[S]ince Plaintiff had, per her counsel’s representation, already lost her cell phone by this point, her ‘offer’ could not have been genuine,” Fox’s lawyers wrote.

In 2019, McHenry tweeted, then deleted, that she had “proof” to back up her claims.

But in a statement to Law&Crime, celebrity attorney Lisa Bloom, whose firm is handling McHenry’s case, dismissed Fox’s criticism of the phone’s loss.

“Britt has already provided all of the relevant text messages, which she downloaded before she lost her phone, to the investigators and in discovery,” Bloom said. “We have also offered a forensic examination of her laptop and cloud to obtain any and all messages between her and Mr. Murdoch. She has nothing to hide.”

Legally, Fox hopes the missing phone will give it an edge in court.

Rule 37(e) of the Federal Rules of Evidence says judges can hold the loss of “electronically stored information” against litigants if the information “should have been preserved in the anticipation . . . of litigation” and if the information “is lost because a party failed to take reasonable steps to preserve it.”

Bloom’s statement suggests the information was reasonably preserved. To that end, the rule says negative inferences can only be drawn if the lost information “cannot be restored or replaced through additional discovery.”

Rule 37(e) further says that if the loss of information causes prejudice to another party (here, Fox), then remedial measures may be ordered if they are “no greater than necessary to cure the prejudice.”

Fox appears to be teeing up an argument that the loss of data is causing it at least some — if not substantial — prejudice.

Naturally, some data losses are accidental; some, however, are intentional. Rule 37(a) explains what might happen if intentional data loss occurred. If McHenry “acted with the intent to deprive” Fox of the full use of the information, the rule allows the court to “presume that the lost information was unfavorable” to McHenry and to therefore instruct a jury to make such a presumption. Or, the court could dismiss McHenry’s case altogether. But intentional data loss is not currently alleged.

Elsewhere, Fox said “two independent investigations” into McHenry’s sexual harassment claims “included a review of the text log of over 5,000 text messages . . . and a phone call log showing more than forty hours of telephone conversations” between the McHenry and Murdoch. The review concluded that the two hosts “mutually and consensually sent each other inappropriate text messages but that no sexual harassment occurred.”

That’s why Fox says it needs to be certain of the context of the conversations McHenry has cited in her complaint. It argues the offending passages appear to have been a two-way street. Per Fox’s court filings:

Plaintiff texted Tyrus a photo of herself and asked Tyrus for feedback on how she looked because, she explained, her ex-boyfriend “told me when he broke up with me that I don’t look good in my pics I post.”

[O]n November 2, 2018, Plaintiff texted Tyrus a photo of herself that she previously posted on social media that was receiving negative comments concerning her legs and said, “People are so fucked up. I’m double jointed and was a competitive soccer player so my quads (as in most women) developed more).  Obviously I can’t control my fucking joints.”

Despite trashing the text log Fox says McHenry “created” for the litigation, Fox relied on the log to assert that McHenry and Murdoch “did indeed have many personal conversations about their relationships and families.”

“There were also countless examples of innuendo, comments of a sexual nature, and vulgar or potentially offensive language made by both parties,” Fox said. “Neither appeared to be offended by crude language or topics.”

McHenry’s text log states that Murdoch warned her on Nov. 5, 2018, that a “Dick pic” would be “coming in 5 sec!!!!” However, the log indicates, and McHenry later admitted, that Murdoch “never sent” her “a photo of his or anyone else’s genitalia.” Rather, what followed was “photo of an individual who they both disliked,” followed by “over 175 messages and a 30-minute phone call” — suggesting the “dick pic” reference was sarcasm.

Other conversations suggest the two communicated regularly and even traveled internationally as friends after conduct McHenry now alleges to be harassment.

The full document, which contains Fox’s response to McHenry’s claims that the company and its management ignored her sexual harassment report and retaliated against her, is below.