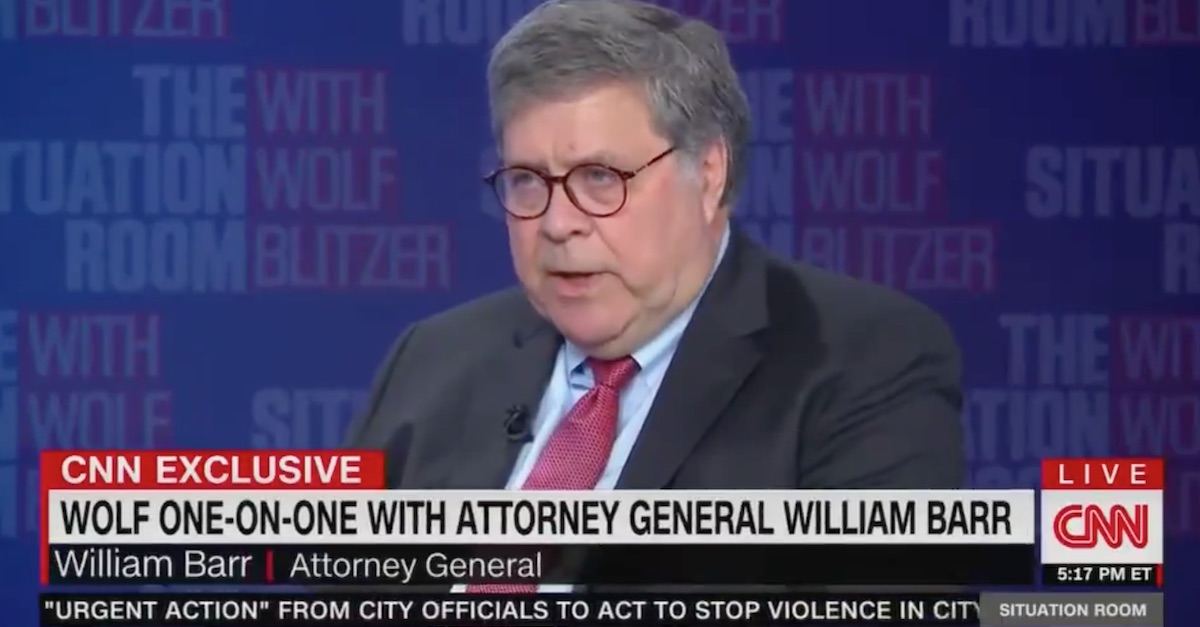 The nation’s top lawyer explained that it’s his belief that the president, when he says such things, is speaking “colloquially,” not credibly accusing his political opponents of committing crimes against the state that are punishable by death.

“Is it appropriate, though, for the sitting president to be accusing his predecessor, President Obama, and former Vice President Biden of committing treason?” CNN’s Wolf Blitzer asked.

“Well, treason is a legal term. I think he’s using it colloquially,” Barr answered. This is plainly the attorney general’s way of saying the manner in which the president uses the term “treason” doesn’t resemble the meaning of the legal term. Put another way, this is bad news for anyone who believes that treason prosecutions are a real possibility.

“You have to have a state of war with a foreign enemy to commit treason,” Barr explained. “But I think he feels they were involved in an injustice. And if he feels that, he can say it.” You can watch the interview here.

It should be noted that this is not the first time Barr has said “legal term” treason didn’t happen.

Law&Crime has time and again chronicled the growing list of individuals and entities which, Barr says, have colloquially been branded as traitors by the 45th president. As recently as Aug. 10, the president accused the “Obama Campaign,” which did not exist in 2016, of “probably” committing treason. He said that they got “caught” spying on the Trump campaign.

“I think it’s the political crime of the century,” he added.

On Aug. 18, President Trump said it was a “disgrace” that treasonous Obama administration officials were not in jail.

“But the bottom line is: We caught President Obama and Sleepy Joe spying on our campaign. That’s treason. That’s illegal,” Trump continued. “These people should take them and do something with them — I’ll tell you. It’s a disgrace. It’s really a disgrace.” You can decide for yourselves whether or not that sounds colloquial.

Barr has said before that John Durham’s ongoing criminal investigation of Russia probe investigators and “Obamagate” was focusing neither on Obama nor Biden.

“All right. Well, as I’ve said a few times, no one under investigation in the Durham matter is running for president,” Barr told NPR in June. “And I’ve said publicly that neither President Obama or Vice President Biden are under investigation. And I’ve also said I’m committed to having the American people have a free choice in this election between the candidates and I don’t want the Department of Justice to be interfering in that.”

Barr agreed, however, that a “grave injustice, unprecedented in American history,” was committed against Trump and his associates before and after the 2016 election.

The Russia probe was based on a “false and utterly baseless, Russian collusion narrative,” Barr said in May, railing against “two different standards of justice.”

“We can’t allow this to ever happen again,” he said.