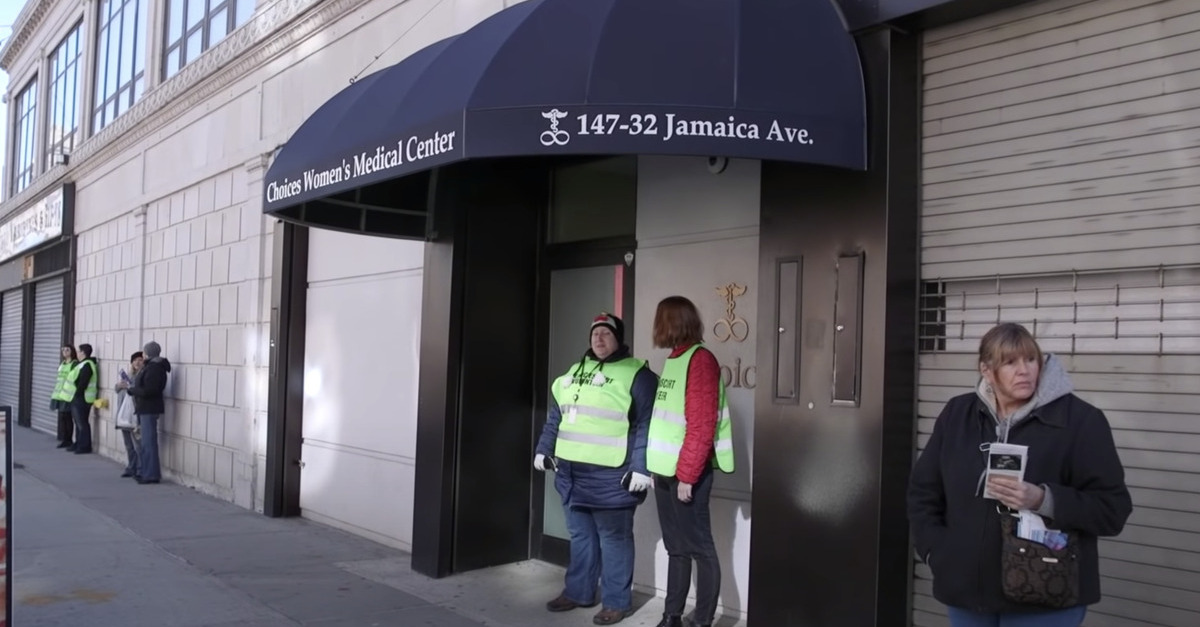 Anti-abortion protesters in New York scored a big win Thursday courtesy of the U.S. Court of Appeals for the Second Circuit. A three-judge panel of the federal appellate court reconsidered and reversed its own ruling, finding that the lower court had not made a reversible legal error when it denied the New York State Attorney General a preliminary injunction against protest groups.

The New York Attorney General at the time, the since-disgraced Eric Schneiderman, conducted a year-long investigation in 2017. As a result, Schneiderman’s office filed a complaint against 13 defendants who protested outside Choices Women’s Medical Center, an abortion clinic in Queens. The state alleged that the protesters “used and threatened to use force against [the clinic’s] patients and patient escorts, obstructed patient access to the clinic, followed and harassed patients near the clinic, and interfered with the clinic’s operation” in violation of state and federal access-to-clinics statutes.

In addition to the complaint’s allegations of statutory violations, New York also asked the court for a preliminary injunction against the protest groups. After a hearing, the district court found that protesters used tactics such as “do[ing] the slow walk in front of the clients so [other protestors] can talk to [those patients],” “‘tag teaming’ patients so that, even after a patient has asked the protestor to leave her alone, another protestor will approach the patient,” and, “using signs as a ‘barrier’ by the clinic entrance on a city sidewalk.”

U.S. District Judge Carol Bagley Amon, a George W. Bush appointee, refused to grant New York State an injunction against the protesters. She found that the state failed to make a showing that the protesters’ actions risked irreparable harm.

Judge Pooler penned the panel’s decision in March 2021.  He wrote that “[t]he right to protest is a fundamental right central to the First Amendment” but that “[t]he right to be free from harassment and threats from protestors is an equally fundamental right.” Acknowledging that “[p]roperly protecting both sets of rights presents some of the most challenging work courts are called upon to do,” Pooler reasoned that the protesters’ intent to harass should have been inferred from their conduct.

At the time, Judge Livingston dissented in part, arguing that Judge Amon hadn’t made any discernible error in ruling denying New York’s request for injunction. Livingston focused her dissent on the disparity between the attention New York gave the investigation and the actual impact caused by protesters.

“Protesters had been appearing outside [the clinic] on Saturday mornings for some four years before the New York State Attorney General (“OAG”) initiated the investigation,” detailed Livingston. “Then, for over a year,” she continued, “the OAG operated a high-mounted surveillance camera, employed undercover investigators, and outfitted two Clinic escorts with hidden recording devices to document protester activities.” Even after this “lengthy surveillance,” an OAG complaint which detailed “numerous purported violations of federal, state, and local clinic access laws,” and two weeks of testimony from seventeen witnesses, only three incidents were identified as having violated the law. Moreover, of those three  incidents, “none were likely to recur.”

Now, the Second Circuit has adjusted its own ruling to fall in line with Judge Livingston’s dissent.

The now-unanimous panel, however, was quick to clarify the narrow scope of its new holding. Judge Calabresi commented that the court would “not specifically affirm or question the array of evidentiary and factual findings made by the district court.” Rather, he said that the panel simply was remanding the matter for “full consideration of the merits.” Calabresi went on by quoting a 2004 case as follows:

Although we are doubtful about certain aspects of the district court’s findings, we are at the same time persuaded that [the district court’s] ultimate determination that plaintiff was not entitled to a preliminary injunction did not constitute an abuse of [its] discretion.

The Thomas More Society, the group that represents the protesters in the case, issued a statement to Law&Crime via email calling the Second Circuit’s ruling “a stunning reversal.”

Stephen Crampton, the group’s senior counsel, said that “[t]his is a great win, to be sure” but continued that “the case should never have been brought in the first place.”

“It was always about politics,” said Crampton, “not justice.”

Following the Second Circuit’s ruling on the preliminary injunction, the case will now head back to federal district court for a trial on the merits.

New York State did not immediately respond to request for comment.