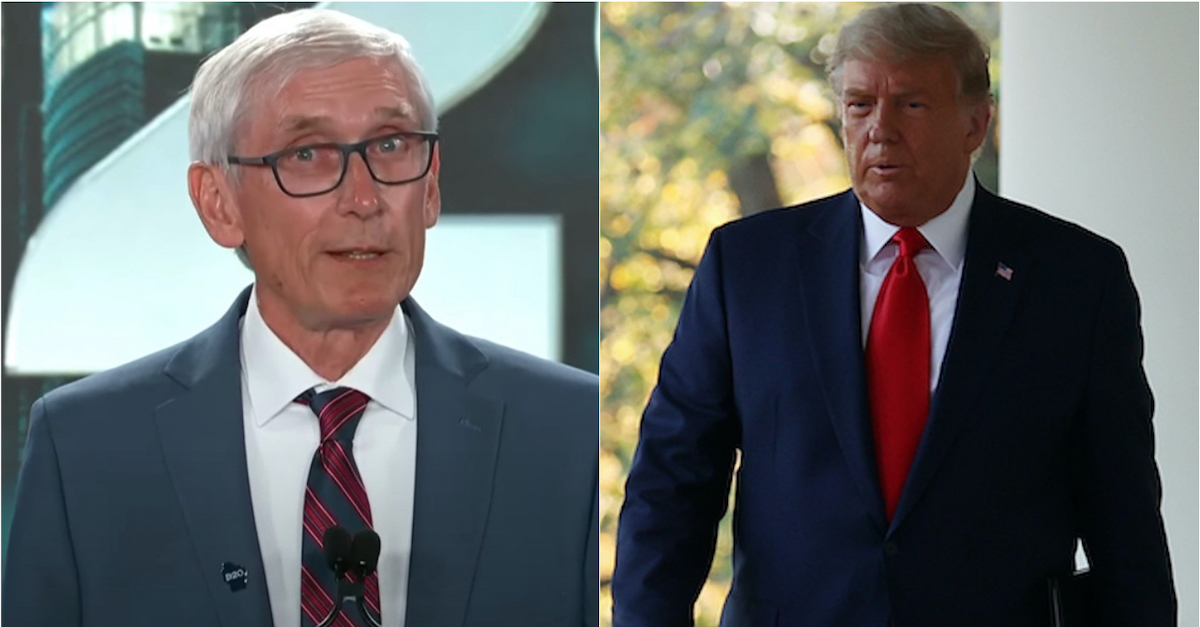 Wisconsin Gov. Tony Evers (D) asked a federal judge to force former President Donald Trump to “personally” pay fees for his “audacious” election-subversion efforts, days after a brutal sanctions ruling imperiled the law licenses of nine lawyers who attempted to overturn the results of the 2020 election in key states.

“More than eight months ago, former President Trump filed this lawsuit in an audacious attempt to overrule the will of the voters by fiat,” the governor’s attorney Jeffrey A. Mandell wrote in a 17-page legal brief. “He sought unprecedented relief, and his team pressed the case in a slapdash manner incommensurate with the gravity of the subject matter. Now, Trump recasts the litigation in a sepia tone, glossing over flaws with conclusory exculpations and dismissing criticism as ‘Monday morning quarterbacking.'”

The Wisconsin Democrat casts this effort as revisionist history.

“Trump provides no legitimate defense of litigation conduct that went beyond mere procedural missteps, constituting a deliberate abuse of the judicial process and attempt to overturn the votes of 3.3 million Wisconsinites,” Evers’ brief demanding sanctions states.

Requesting attorneys’ fees, Evers pointed to the far heavier sanctions sought by the city of Detroit in a case by the so-called “Kraken” lawyers, whose efforts to overturn election results in Arizona, Georgia, Michigan, and Wisconsin were rejected by every court. On Wednesday night, a federal judge in Michigan referred each of the nine attorneys associated with the Michigan arm of that litigation to face disciplinary proceedings in their home states for “possible suspension or disbarment.”

“Recent sanctions decisions in other post-election litigation support the propriety of sanctions here,” the governor’s brief states. “Federal trial courts in Michigan and Colorado awarded fees under both 28 U.S.C. § 1927 and inherent authority in other baseless post-election cases.”

“The Michigan and Colorado decisions cited several key considerations also present here,” the brief continues. “There, as here, the litigation was ‘not a normal case in any sense,’ as its purpose was ‘questioning the validity of a Presidential election, and the fairness of the basic mechanisms of American democracy.'”

Judge Ludwig, who will determine the sanctions motion, was appointed by Trump and scathingly rejected his effort to overturn Wisconsin’s election.

“This is an extraordinary case,” Ludwig wrote in a 23-page ruling in December, italicizing the word repeatedly in his ruling. “A sitting president who did not prevail in his bid for reelection has asked for federal court help in setting aside the popular vote based on disputed issues of election administration, issues he plainly could have raised before the vote occurred. This Court has allowed plaintiff the chance to make his case and he has lost on the merits.”

“In his reply brief, plaintiff ‘asks that the Rule of Law be followed,’” Ludwig observed.

“It has been,” the judge concluded.

Wrangling over the consequences of that failed litigation has continued for several months since then, and Gov. Evers wants Trump to “personally” pay a price for it, under the court’s inherent authority.

“Nearly a month after losing re-election and having the results confirmed via recount, Trump prosecuted a lawsuit, devoid of factual or legal support, in an attempt to subvert the voters’ will, pushing bad-faith election litigation to new lows. His actions warrant sanctions under the Court’s inherent authority, and his attorneys’ conduct merits fee shifting under 28 U.S.C. § 1927.”

Trump’s attorney in the Wisconsin case, William Bock, III, slammed what he described as the governor’s “misleading” brief, which he said “mischaracterized facts, misapplied cases, and seeks to bring cancel culture to the court system.”

“In our case former President Trump raised legitimate concerns about election law changes made by Wisconsin officials that were not approved by the Wisconsin legislature,” Bock told Law&Crime in an email. “The fact that the court did not grant him the relief requested does not justify imposing fees against the former President.”