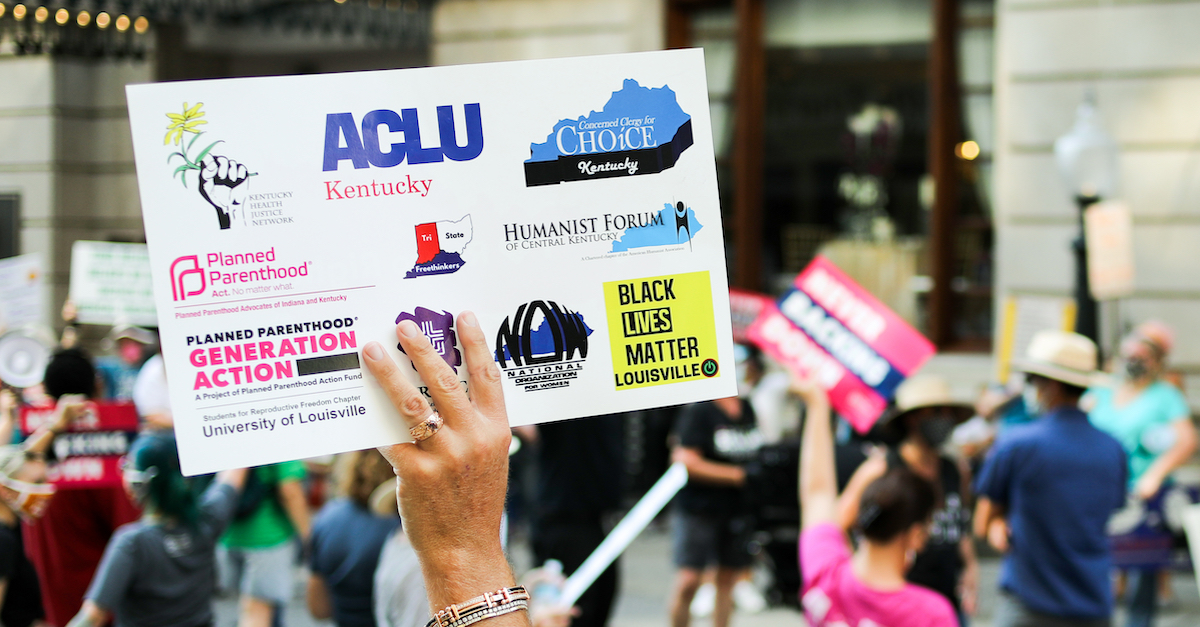 A federal judge in Kentucky has granted a temporary restraining order blocking state officials from enforcing a sweeping abortion law that was passed over the governor’s veto.

“The Court restrains enforcement of the entirety of HB 3 at this time,” wrote U.S. District Judge Rebecca Grady Jennings in a ruling Thursday.

The law bans abortion after 15 weeks of pregnancy. There are no exceptions for pregnancies that result from rape or incest, although there is an exception if the woman’s life is in danger. The law also requires a medical examination before a medication abortion, and when an abortion is performed, the clinic must work with a funeral home in order to bury or cremate the remains.

Gov. Andy Beshear, a Democrat, had vetoed the bill on the grounds that the abortion restrictions didn’t allow exceptions for pregnancies that resulted from rape or incest.

“Rape and incest are violent crimes,” he said, when he vetoed the bill. “Victims of these crimes should have options, not be further scarred through a process that exposes them to more harm from their rapists or that treats them like offenders themselves.”

The state’s Republican-led legislature was able to override the veto and signed the bill into law on April 13.

In her ruling Thursday, Jennings, a Donald Trump appointee, didn’t reach the constitutional merits of the law itself.

Instead, she said, the Kentucky legislature had made it impossible for Planned Parenthood to comply with the law’s reporting requirements, and granted the injunction “to the extent that Defendants are restrained from enforcing HB 3 related to reporting and registration based on forms and programs not yet created or promulgated” by the state’s Health and Family Services Cabinet.

“The Court does not consider at this stage the constitutionality of the substance of the requirements in HB 3, but merely the enforceability of the provisions based on the impossibility of compliance,” Jennings wrote.

The law declared medication abortion and abortions for pregnant minors a public health emergency. That declaration bypasses a requirement in the state’s constitution that a law will only take effect 90 days after the adjournment of the session in which it was passed. But because the Cabinet hadn’t yet provided the forms that would allow Planned Parenthood and other abortion providers to report the required information, the legislature had made it impossible for Planned Parenthood to comply.

Kentucky Attorney General Daniel Cameron had said that until the legislature promulgated the necessary forms, Planned Parenthood could simply report the required information “in a manner it finds expedient.”

Jennings said that doing so would mean that Planned Parenthood would almost certainly violate the law, which required the paperwork to be submitted.

“It would be unreasonable for Plaintiff to assume that HB 3 does not mean what it states,” Jennings wrote.

“Nowhere in Attorney General Cameron’s response was it represented that his office would not enforce HB 3 until the Cabinet creates a means to comply with it,” Jennings wrote, finding that “based on the plain language of HB 3, the Kentucky Legislature intended for the entire law to become effective immediately, regardless of whether the Cabinet has created a means for compliance.”

Planned Parenthood and the ACLU celebrated the ruling Thursday.

“Abortion is legal in Kentucky!” Planned Parenthood said on Twitter. “A federal district court has temporarily blocked #HB3. This is a crucial win, but it’s just the first step in the fight. Stay tuned for updates, and don’t hesitate to reach out to us if you are in need of care.”

BREAKING NEWS: Abortion is legal in Kentucky! A federal district court has temporarily blocked #HB3. This is a crucial win, but it’s just the first step in the fight. Stay tuned for updates, and don’t hesitate to reach out to us if you are in need of care. pic.twitter.com/mIZh8n4kLS

“We’re grateful for the temporary restraining order (TRO) restricting this egregious abortion ban from continuing to block a constitutionally protected right to basic care,” Rebecca Gibron, CEO of Planned Parenthood Great Northwest, Hawai’i, Alaska, Indiana, and Kentucky said in a press release. “This is a win, but it is only the first step. We’re prepared to fight for our patients’ right to basic health in court and to continue doing everything in our power in ensure abortion access is permanently secured in Kentucky.”

Heather Gatnarek, an attorney for ACLU of Kentucky, praised Jennings for recognizing what she called the “blatant unconstitutionality” of the law, but acknowledged the time Planned Parenthood may have to provide abortions in Kentucky may be limited.

“Unfortunately, the ability to receive an abortion will continue to hang by a thread throughout the United States,” Gatnarek said, noting that the Supreme Court is considering a challenge to Roe v. Wade, which has long upheld abortion rights in the U.S. “Abortion remains legal and is once again available in Kentucky. We will always fight to keep it that way here and across the country.”

“We are disappointed that the court chose to temporarily halt enforcement of the entire law,” Cameron said in a statement. “This law is constitutional, and we look forward to continuing to defend it.”

The temporary restraining order will be effective for 14 days, unless it is extended. In her ruling, Jennings wrote that she will consider “additional proof” on the issue at a preliminary injunction hearing which will be scheduled before the restraining order expires.