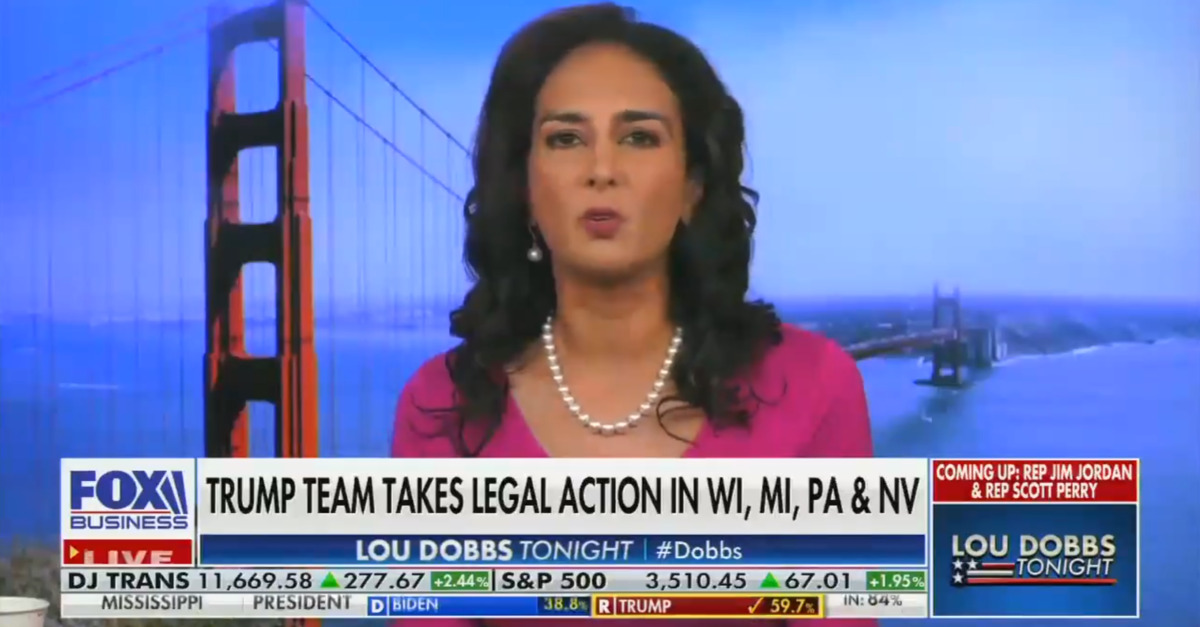 The Trump campaign is now at the point where officials are openly stating their only way to win the election is through the intervention of the U.S. Supreme Court—aid they hope to obtain in short order.

National Committeewoman of the Republican National Committee for California and Trump 2020 legal adviser Harmeet Dhillon expressed that view during a Thursday evening appearance on Fox Business.

Trump campaign legal adviser: “We’re waiting for the United States Supreme Court – of which the President has nominated three justices – to step in and do something. And hopefully Amy Coney Barrett will come through” pic.twitter.com/Z4bfBqsks5

“I will tell you that in Pennsylvania we have hundreds of lawyers–mostly volunteer lawyers–on the ground there fighting hard and they have been since before election day,” she told Fox Business host Lou Dobbs. “So, no worries that we are short on resources there.”

The Trump campaign does, in fact, have an army of attorneys mounting a vast array of legal challenges in the key electoral college state.

Dhillon went on to reference a court ruling in the Trump campaign’s favor that occurred early Thursday morning.

As Law&Crime previously reported, a state court of appeals overruled a court of first instance in Philadelphia and gave both the Trump and Biden campaigns additional access to ballot canvassing. Chaos, however, quickly ensued as the ballot count was paused to accommodate the court’s order before starting back up again. The City of Philadelphia quickly appealed that ruling to the Keystone State Supreme Court but no action has been taken on the petition as of Thursday evening.

Additionally, some Trump supporters later claimed the court order was being ignored by Philadelphia elections officials.

“Philadelphia election officials are in contempt,” Dhillon falsely alleged–reaching a premature legal conclusion. “They are ignoring that court order and going on with the counting without Republican election monitors there to witness it.”

Assuming the accusations against Philadelphia elections officials are true, no court has yet had the opportunity to even entertain the idea of a contempt order.

And the kind of shenanigans that can occur there, by the way, in Philadelphia you have election workers with by Biden-Harris 20/20 masks on and they’re the ones who look at ballots and they see if a ballot is defective in some way. They may fill it in or fix it and there is nobody on the Republican side to witness it. And because that election is so close, because the president’s lead is declining, that is where we could lose it and it is an outrage that those people are in contempt of court.

Those alleged shenanigans are what prompted her to lean into the idea for a Supreme Court intervention.

“Meanwhile we’re waiting for the United States Supreme Court–which the president has nominated three justices–to step in and do something,” she said. “And hopefully Amy Coney Barrett will come through and pick it up. There’s no guarantee of that, Lou, so we have to fight this on the ground and make sure that we challenge every place–and we are.”

“Only the best and brightest lawyers work for Trump,” he tweeted.