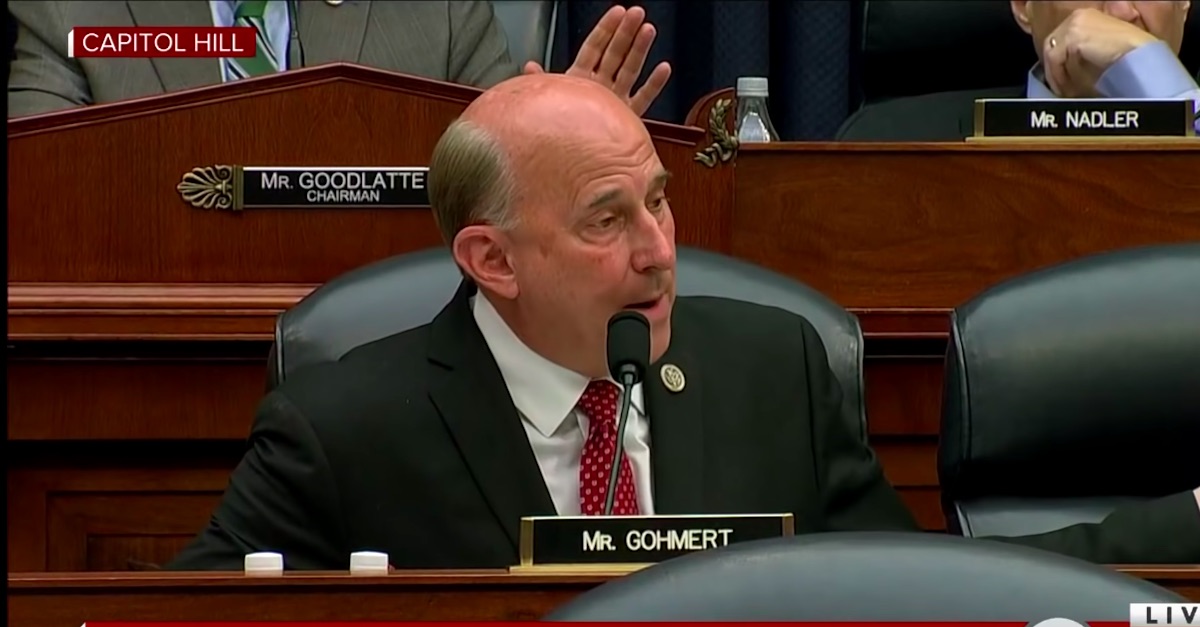 After some delay due to compatibility issues between Google Docs and Microsoft Word, lawyers for Rep. Louie Gohmert (R-Texas) and a nonexistent slate of alternative pro-Trump electors responded on New Year’s Day to the Department of Justice’s opposition to their lawsuit against Vice President Mike Pence. Election law experts rapidly responded to the Gohmert reply by calling its core aim “breathtaking” and “preposterous.”

On New Year’s Eve, the DOJ asked a federal judge to deny emergency injunctive relief sought by fake pro-Trump electors and Rep. Gohmert. The plaintiffs sued VP Pence in the U.S. District Court for the Eastern District of Texas earlier this week. They argued that Pence has the power to select “competing slates of Presidential Electors” (there aren’t any) and argued that the Electoral Count Act of 1887 (ECA) is unconstitutional.

The DOJ’s answer to the extreme proposition that VP Pence has the power to ignore electoral votes and hand President Donald Trump a second term was straightforward: You are suing the “wrong defendant.”

But these plaintiffs’ suit is not a proper vehicle for addressing those issues because plaintiffs have sued the wrong defendant. The Vice President—the only defendant in this case—is ironically the very person whose power they seek to promote. The Senate and the House, not the Vice President, have legal interests that are sufficiently adverse to plaintiffs to ground a case or controversy under Article III. Defendant respectfully request denial of plaintiffs’ emergency motion because the relief that plaintiffs request does not properly lie against the Vice President.

Rep. Gohmert and a cast of purported competing GOP electors in Arizona—a state Trump lost to Joe Biden—responded to that on Friday by claiming the DOJ argument is “easily disposed” of because plaintiffs are right and DOJ is wrong.

“As set forth in this section, Plaintiffs are likely to prevail because they are right on the merits, have a cause of action against the Defendant in this Court, and this Court has jurisdiction over Plaintiffs’ claims,” the reply said. At the same time, plaintiffs’ lawyers characterized DOJ and would-be intervenors’ arguments as “’we know better’ than those who framed the Constitution” positions.

First, plaintiffs claimed that they aren’t asking a federal judge to “choose a winner of the presidential contest.” Next, plaintiffs said they are not asking the court to “rule on whether there was pervasive fraud in the swing states that are subject to objection.” What they are asking the court, plaintiffs said, is for a finding that the ECA conflicts with the Twelfth Amendment—because it renders Pence a merely ministerial rubber-stamper who cannot choose the winner of the presidential ticket and, thereby, re-elect himself.

The plaintiffs also attempted to handwave away the DOJ’s argument that they lacked standing as a “procedural” argument (even though the suit may very well end up being dismissed on those grounds):

In their submissions, Defendant and amici never reach this issue. Instead, they hide behind procedural arguments such as standing, laches and other “gatekeeping” defenses that, as set forth below, are easily disposed above. They argue that the January 6th joint session is no more than a perfunctory coronation. A ceremony where the Vice-President is relegated to the mundane task of opening envelopes filled with electoral votes certified by state governors. They say that the Vice President, the glorified envelope-opener in chief, has no authority to preside over anything else or to decide anything of substance or to even count the votes in those weighty envelopes. He is only the envelope-opener.

Professor Derek T. Muller, who teaches election law at the University of Iowa College of Law, told Law&Crime that he sees plaintiffs’ arguments as “pretty far-fetched.” He said that he’s “not sure they even get past justiciability concerns, either standing or suing the wrong party.”

The plaintiffs assert that Pence, as a “Presiding Officer of the Senate,” is no mere “clerk” and can play an “active” role in the Electoral College vote. (That claim is similar to arguments that were made in favor of Chief Justice John Roberts being able play a central role when presiding over President Trump’s impeachment trial by, for instance, calling the witnesses that Senate Republicans refused to call.)

The Gohmert lawsuit argues that Pence “may exercise the exclusive authority and sole discretion in determining which electoral votes to count for a given state, and must ignore and may not rely on any provisions of the Electoral Count Act that would limit his exclusive authority and his sole discretion to determine the count, which could include votes from the slates of Republican electors from the Contested States.”

In other words, Gohmert and the purported electors contend that an incumbent vice president who lost reelection, like Pence, rather than ministerially counting certified electoral votes may unilaterally decide not to count certain ones in order to secure his own reelection. The DOJ pointed out that Gohmert, when arguing in favor of a VP unbound, actually proved that he does not have standing to sue.

“After all, it is the role prescribed for the Senate and the House of Representatives in the Electoral Count Act to which plaintiffs object, not any actions that Vice President Pence has taken,” DOJ argued. “Indeed, as a matter of logic, it is those bodies [the Senate and House] against whom plaintiffs’ requested relief must run. The House of Representatives has already expressly recognized those interests by informing the Defendant that it intends to present the Court numerous arguments in response to plaintiffs’ motion.”

The DOJ said in a footnote that Gohmert’s argument in favor of Pence’s nonexistent unilateral power, if accepted, would disempower Gohmert “as a Member of the House under the Electoral Count Act to raise objections to the counting of electoral votes, and then to debate and vote on them,” which is what Republican Sen. Josh Hawley (R-Mo.) is doing in the Senate.

Still, the plaintiffs asserted that history was on their side—appealing to pre-1888 history and largely ignoring the history that followed:

There was even a line referring to “commentators” who have said the passive voice of the Twelfth Amendment suggests Pence might have “hidden powers.”

This is a mistake that I’ve encountered in student work. Do not simply say that “commentators argue” something. You need to make those arguments yourself. You can – and must – cite the commentators you are relying on, but you must argue. pic.twitter.com/SxDP4OeiND

Edward B. Foley, a law professor at Ohio State University’s Moritz College of Law and the director of the school’s election law program, said in a lengthy thread that the Gohmert reply was “breathtaking & preposterous” when claiming Pence can “ignore all electors” from a given state.

“The Constitution never intended this monarchical power to disenfranchise Electoral College votes based on personal whim,” Foley said. “The far better view, in my judgment, is that the Constitution’s Necessary & Proper Clause empowers Congress to enact a law, like the Electoral Count Act, to implement 12th Amendment’s joint session.”

Foley said that there was “[n]o doubt” that the Twelfth Amendment is “more ambiguous than desirable,” but said it was a “no-brainer” which interpretation of the issues at hand is the better one—and it’s not the one that says Pence has “sole power to accept or reject a state’s electoral votes.”

2/ The Gohmert reply is breathtaking & preposterous in claiming (p4) a Vice President can "ignore all electors" whose votes he dislikes. The Constitution never intended this monarchical power to disenfranchise Electoral College votes based on personal whim.

4/ … The Twelfth Amendment's simple description of a special joint session of Congress for counting Electoral College votes is precisely the kind of constitutional clause that the Necessary & Proper power was designed for, to permit Congress to add specificity to the process.

6/ No doubt 12th Amendment is more ambiguous than desirable. I've said that many times. But as between these 2 interpretations: 1) VP has sole power to accept or reject a state's electoral votes, or 2) Congress has power under N&P Clause to enact law to regulate joint session?…

7/…It’s a no-brainer which interpretation is better, as a matter of both Constitution’s text (N&P Clause is straightforwardly clear on gap-filling power it grants Congress) & constitutional principle (better to lodge vote-counting in legislature than in single elected official)

Tulane Law’s Ross Garber told Law&Crime that it is true the Twelfth Amendment is “ambiguous” on Pence’s role and that the Electoral Count Act is a “mess,” but he also said that the plaintiffs’ “contentions” about both of those things “are neither new nor particularly well argued.”

“Their lawsuit is defective for reasons noted by counsel for the defendants, including Vice President Pence. And their litigation is more a political and public relations campaign than an earnest effort to seek judicial resolution of a legitimate dispute,” Garber said. “While it is true that the 12th Amendment is ambiguous as to the role of the Vice President, and the Electoral Count Act is a sloppily drafted mess, this suit isn’t the vehicle to hash out the issues that might well be raised at some point under some circumstances.”

Several other legal experts were in agreement with the assessment that the Gohmert lawsuit is “breathtaking” and “brazen.”

This really is a breathtaking lawsuit. It says that to protect the integrity of our elections, the Vice President and a minority of Congress should be free to select as the next president the candidate selected by a minority of voters. https://t.co/SCE8vjRhvx

These people do not appear to understand what either "democratic" or "republic" actually mean. And, given that the plaintiffs are the unduly unqualified cosplayers from Arizona, they also don't seem to understand what "duly qualified" means.

… even if (or, perhaps, especially if?!) that means he declares himself the winner of an election he otherwise clearly lost.

I guess if you go deep enough down the “republic not a democracy” rabbit hole, then you can convince yourself that the Vice President has the unilateral power to decide a presidential election. https://t.co/AiWjoQQZPT

This lawsuit isn’t worth the paper it’s printed on.

The only value of this suit is to reveal who has more loyalty to Donald Trump than they have to the Constitution of the United States. https://t.co/DkrxAkCZaI

Read the Gohmert response below: