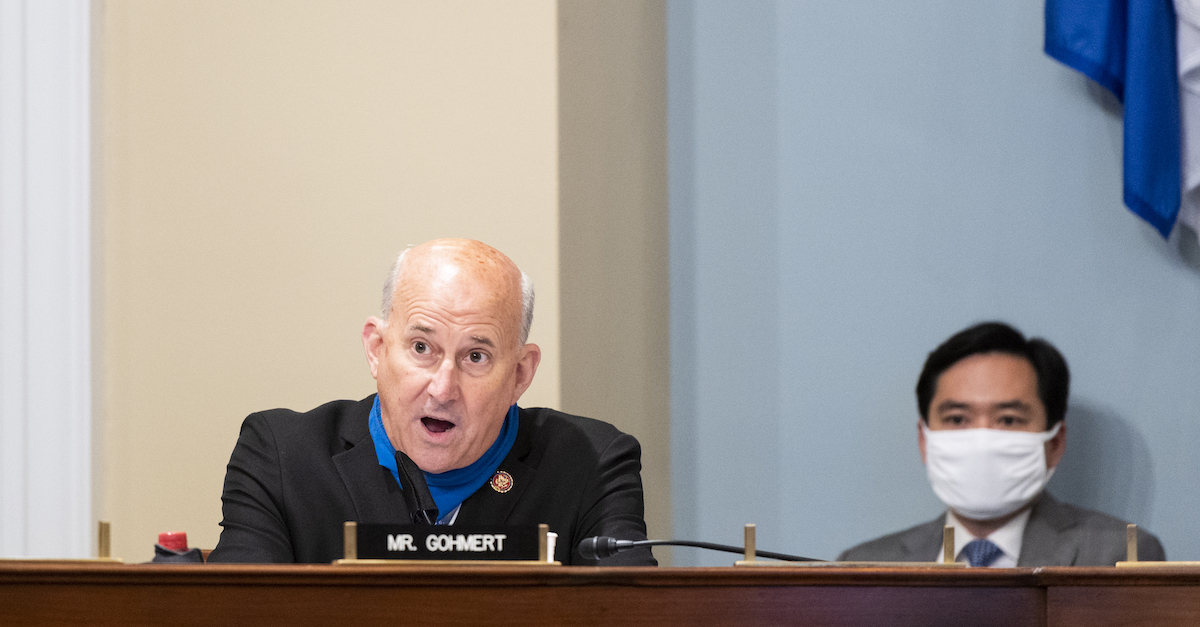 “The problem for Plaintiffs here is that they lack standing. Plaintiff Louie Gohmert, the United States Representative for Texas’s First Congressional District, alleges at most an institutional injury to the House of Representatives. Under well-settled Supreme Court authority, that is insufficient to support standing,” U.S. District Judge Jeremy Kernodle wrote, echoing the Department of Justice’s argument that plaintiffs sued the wrong defendant. “The other Plaintiffs, the slate of Republican Presidential Electors for the State of Arizona (the ‘Nominee-Electors’), allege an injury that is not fairly traceable to the Defendant, the Vice President of the United States, and is unlikely to be redressed by the requested relief.”

“Accordingly, as explained below, the Court lacks subject matter jurisdiction over this case and must dismiss the action,” the judge said. Judge Kernodle was appointed by President Donald Trump.

If you were reading Law&Crime earlier on New Year’s Day, you would know that plaintiffs attempted to downplay the DOJ’s argument that they lacked standing to sue. Here’s what lawyers for Gohmert et al. had to say in their reply on Friday:

In their submissions, Defendant and amici never reach this issue. Instead, they hide behind procedural arguments such as standing, laches and other “gatekeeping” defenses that, as set forth below, are easily disposed above. They argue that the January 6th joint session is no more than a perfunctory coronation. A ceremony where the Vice-President is relegated to the mundane task of opening envelopes filled with electoral votes certified by state governors. They say that the Vice President, the glorified envelope-opener in chief, has no authority to preside over anything else or to decide anything of substance or to even count the votes in those weighty envelopes. He is only the envelope-opener.

It turns out that “procedural arguments” about standing matter a great deal in court. Professor Derek T. Muller, who teaches election law at the University of Iowa College of Law, told Law&Crime earlier on Friday he was not sure plaintiffs’ “pretty far-fetched” arguments would “even get past justiciability concerns, either standing or suing the wrong party.” He was right.

Though there are no “competing electors—the election results in every U.S. state have been certified and the Electoral College votes for Biden have been cast—Gohmert and the other plaintiffs claimed the Electoral Count Act of 1887 (ECA) violates the Twelfth Amendment by not allowing the VP to count uncertified votes cast by Trump’s so-called slate of “shadow electors.” The Twelfth Amendment only dictates that the VP, as president of the Senate, “open all the certificates” and nothing more.

The Gohmert lawsuit asserted that an incumbent vice president who lost reelection, like Pence, rather than ministerially counting certified electoral votes may unilaterally decide not to count certain ones in order to secure his own reelection. Plaintiffs asked Judge Kernodle to find ahead of Jan. 6 that the ECA is “unconstitutional” and conflicts with the Twelfth Amendment because it renders Pence a merely ministerial rubber-stamper.

“[Pence] may exercise the exclusive authority and sole discretion in determining which electoral votes to count for a given state, and must ignore and may not rely on any provisions of the Electoral Count Act that would limit his exclusive authority and his sole discretion to determine the count, which could include votes from the slates of Republican electors from the Contested States,” the suit asserted earlier in the week.

The DOJ, on VP Pence’s behalf, noted on New Year’s Eve that Gohmert was attempting to “empower the Vice President to unilaterally and unreviewably decide objections to the validity of electoral votes, notwithstanding the Electoral Count Act.”

“Plaintiffs are thus not sufficiently adverse to the legal interests of the Vice President to ground a case or controversy under Article III,” DOJ said, adding that if Gohmert’s arguments were to succeed the “result would be to remove any constraint the Electoral Count Act places on the Vice President.”

“After all, it is the role prescribed for the Senate and the House of Representatives in the Electoral Count Act to which plaintiffs object, not any actions that Vice President Pence has taken,” DOJ argued. “Indeed, as a matter of logic, it is those bodies [the Senate and House] against whom plaintiffs’ requested relief must run. The House of Representatives has already expressly recognized those interests by informing the Defendant that it intends to present the Court numerous arguments in response to plaintiffs’ motion.”

“By contrast, a suit to establish that the Vice President has discretion over the count, filed against the Vice President, is a walking legal contradiction,” DOJ went on, asking the court to deny Gohmert’s request for injunctive relief.

The judge proceeded to dismiss the case without prejudice [some citations removed for easier reading]:

Even if their injury were the loss of the right to vote in the Electoral College, Plaintiffs’ requested relief would not redress that injury. Plaintiffs are not asking the Court to order the Vice President to count the Nominee- Electors’ votes, but rather that the Vice President ‘exercise the exclusive authority and sole discretion in determining which electoral votes to count for a given State,’ or alternatively, to decide that no Arizona electoral votes should count. . It is well established that a plaintiff lacks standing where it is ‘uncertain that granting [the plaintiff] the relief it wants would remedy its injuries.’ Accordingly, the Court finds that the Nominee-Electors lack standing.

Because neither Congressman Gohmert nor the Nominee-Electors have standing here, the Court is without subject matter jurisdiction to address Plaintiffs’ Emergency Motion or the merits of their claim.. The Court therefore DISMISSES the case without prejudice.

Alan Kennedy is an attorney and University of Colorado lecturer who actually cast an electoral vote—for Joe Biden—in the Centennial State. He moved to intervene in the case on Thursday.

Kennedy told Law&Crime that the dismissal of this “frivolous lawsuit by Rep. Gohmert and fake electors is a tremendous victory for the electoral process and rule of law.”

“President Trump and his supporters’ last-ditch efforts to overturn the election have failed. Even Trump-appointed judges know that Trump’s Electoral College fantasy is undemocratic and unconstitutional,” Kennedy said. “I look forward to watching President-elect Biden and Vice President-elect Harris sworn in on January 20. We the People have won.”