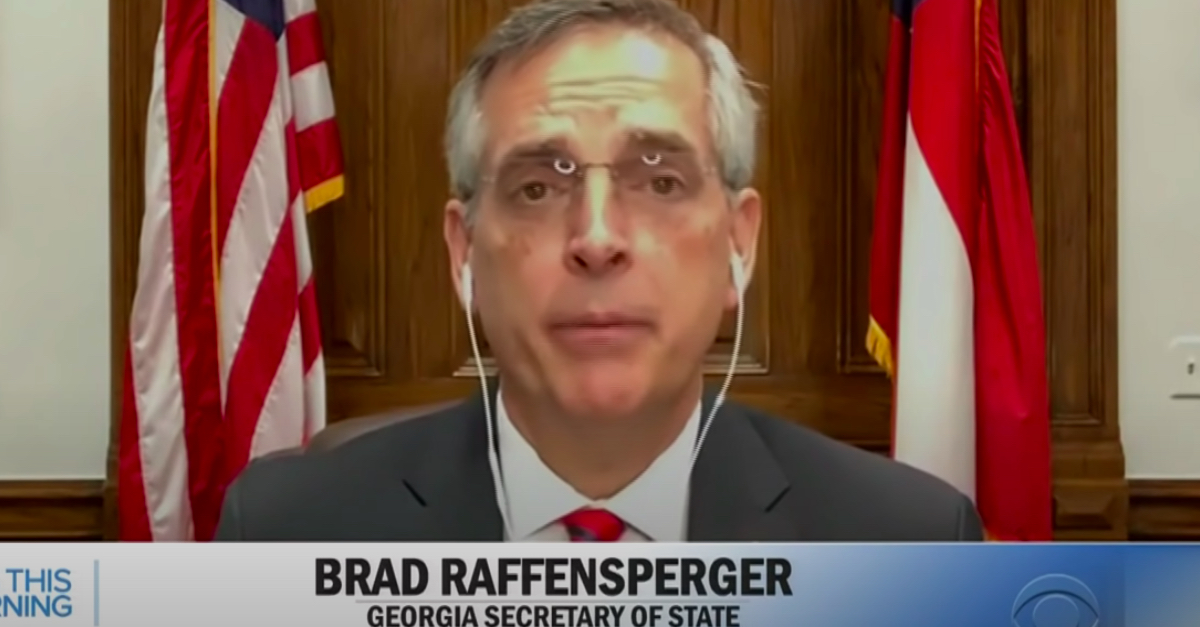 Outgoing President Donald Trump’s lawyers appear to have violated professional rules by blindsiding Georgia Secretary of State Brad Raffensperger in the infamous phone call without his attorneys in pending actions present, the Peach State’s attorneys wrote in a blistering filing on Thursday.

The filing came in a case where a federal judge scathingly rejected Trump’s desperate attempt to decertify Georgia’s election earlier this week.

Georgia’s attorney general’s office accuses Trump’s lawyers of violating the state’s Professional Conduct Rule 4.2, which mandates prior notification for such conversations and calls for discipline with a maximum penalty of disbarment in the event of a violation.

This is what the rule states:

A lawyer who is representing a client in a matter shall not communicate about the subject of the representation with a person the lawyer knows to be represented by another lawyer in the matter, unless the lawyer has the consent of the other lawyer or is authorized to do so by law or court order.
Attorneys for the State and Federal Government shall be subject to this Rule in the same manner as other attorneys in this State.

The maximum penalty for a violation of this Rule is disbarment.

“This action by [Trump]’s counsel was undertaken despite the fact that the substance of the call concerned not only this action but also two pending state superior court matters and a pending appeal in the Georgia Supreme Court in which defendant Raffensperger was represented by counsel, all of which was known to [Trump]’s counsel,” wrote attorney Christopher S. Anulewicz, in a letter also submitted by Georgia Attorney General Christopher M. Carr, a Republican.

Placed on Saturday, Jan. 2 — and published the next day by the Washington Post — the call featured Trump appearing to extort Raffensperger to “find” 11,780 votes to swing the election in his favor, or put him at “risk” of unspecified criminal prosecution.

Together with Georgia’s Gov. Brian Kemp, Raffensperger quickly denied that any deal had been struck.

“There is no ‘settlement,'” the filing states, adding that Trump’s claim is “demonstrably false.”

Emails attached to the filing show that Trump’s attorney Kurt Hilbert, who did not respond to an email seeking a copy of an alleged settlement, was told directly that there was no settlement.

“The letter was not a settlement offer, as you characterize it,” Anulewicz’s email sent to Hilbert dated Jan. 7 and time-stamped at 12:29 a.m. states. The joint session of Congress to certify President-elect Joe Biden’s victory was underway at the time.

“[Trump]’s counsel inquired on numerous occasions about settling the disputes, including the pending state court matters, between the parties,” the state’s attorneys wrote. “Those inquiries were repeatedly rebuffed by defendants on the grounds that [Trump]’s litigation efforts were frivolous and the certified results of the November 3, 2020, election were valid.”

Hilbert, who is an attorney of record on the case, was one of the lawyers on the call with Raffensperger. The only other attorney of record in that docket is John Eastman, the law professor known for writing a column compared to “birtherism” for falsely denying Vice President-elect Kamala Harris’s eligibility for office.

Eastman’s name does not appear to be on the Post‘s transcript, which notes that White House Chief of Staff Mark Meadows and “several” other lawyers, including Cleta Mitchell, were on the call. Mitchell resigned from Foley & Lardner following the disclosure of the tape, which put the powerful firm under an uncomfortable public glare. Both said the resignations were in their best interests.