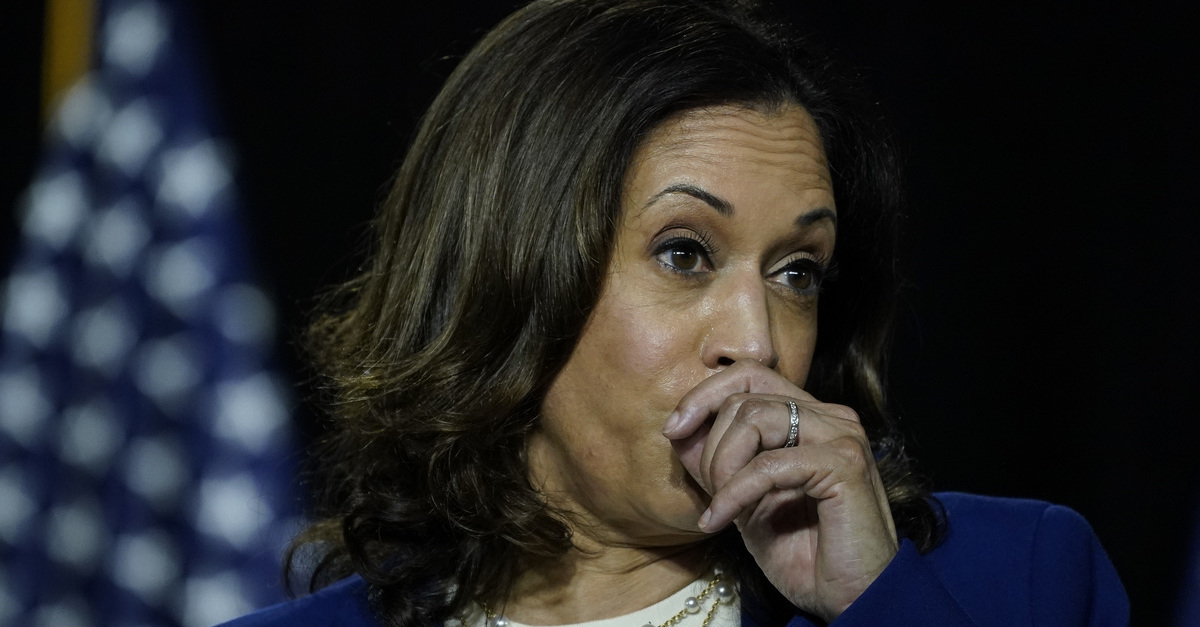 Newsweek editors Nancy Cooper and Josh Hammer would really like the world to think that they did not publish a racist article attacking Kamala Harris’s eligibility to serve as vice president of the United States. In fact, Cooper and Hammer wrote an entirely separate article — stylized as an “editor’s note” — to insist they are not racists for promoting the second great wave of American birtherism aimed at Harris, whose parents are Jamaican and Indian. Legal experts were decidedly a bit skeptical.

Defending Rights & Dissent Policy Director Chip Gibbons tweeted: “My editor’s note explaining that the column we ran is not racist has a lot of people asking questions already answered by my editor’s note.”

“Sometimes in college towns, the owner of some stately manor will die, and his heirs quickly sell the property,” noted journalist Radley Balko. “Some buyer gets it cheap. Rents it out to college kids or a fraternity. The place turns into a flophouse with empty kegs and couches on the lawn. That’s Newsweek now.”

The first paragraph runs down the gist of the piece:

The fact that Senator Kamala Harris has just been named the vice presidential running mate for presumptive Democratic presidential nominee Joe Biden has some questioning her eligibility for the position. The 12th Amendment provides that “no person constitutionally ineligible to the office of President shall be eligible to that of Vice-President of the United States.” And Article II of the Constitution specifies that “[n]o person except a natural born citizen…shall be eligible to the office of President.” Her father was (and is) a Jamaican national, her mother was from India, and neither was a naturalized U.S. citizen at the time of Harris’ birth in 1964. That, according to these commentators, makes her not a “natural born citizen”—and therefore ineligible for the office of the president and, hence, ineligible for the office of the vice president.

Eastman goes on to serially misstate the state of the law–as well as the opinions of the legal community and the precedents of the courts–based on an incorrect reading of the 1898 Supreme Court ruling United States v. Wong Kim Ark.

In essence, and most of the article and its arguments are not worth repeating, Eastman is taking aim at the idea of birthright citizenship–which is the standard that Wong Kim Ark definitively established over 100 years ago–but attempting to paint his own longstanding opposition to the concept as a debate among legal scholars where no such debate actually exists in any serious form whatsoever.

“So before we so cavalierly accept Senator Harris’ eligibility for the office of vice president, we should ask her a few questions about the status of her parents at the time of her birth,” Eastman insists.

Birthright citizenship is one of the bedrock principles of American society. Efforts to undo it are unconstitutional and Eastman’s attempt to muddy the waters was widely-criticized as racist because it is.

On Thursday, Cooper and Hammer rode to both Eastman’s defense and their own.

The original article now contains the following lead-in: “Editor’s note: Some readers reacted strongly to this essay, seeing it as an attempt to ignite a racist conspiracy theory. That is entirely inaccurate, as this Note explains.”

“I teach Constitutional Law [at Yale Law School], and the op ed is wrong, irresponsible, and dangerous,” wrote Yale Law Professor Oona Hathaway. “This explanation makes it worse. Shame on you.”

The linked-to piece from the editors is titled: “Eastman’s Newsweek Column Has Nothing to Do With Racist Birtherism,” which is wrong of course–and which fails to note Eastman’s own long–and debunked–history of attempting to de-legitimize birthright citizenship generally.

“One thing this sorry-not-sorry editor’s note doesn’t say is that John Eastman has long argued against birthright citizenship and that some immigrants aren’t ‘persons’ worthy of political recognition,” noted legal journalist Cristian Farias. “He’s an ardent defender of Trump’s move to exclude them from the Census.”

The editor’s note starts out in a defensive crouch.

“Some of our readers have reacted strongly to the op-ed we published by Dr. John Eastman, assuming it to be an attempt to ignite a racist conspiracy theory around Kamala Harris’ candidacy,” the Cooper and Hammer piece begins. “His essay has no connection whatsoever to so-called ‘birther-ism,’ the racist 2008 conspiracy theory aimed at delegitimizing then-candidate Barack Obama by claiming, baselessly, that he was born not in Hawaii but in Kenya.”

To the extent that the original essay had nothing to do with Barack Obama, that’s very much true, but Eastman’s effort was clearly aimed at stoking racist birther notions about Harris based on her parents–not Obama’s birth certificate.

The Cooper-Hammer article goes on to dig in quite deep–using picayune legal terms in an effort to pretend there is actually a legitimate debate about the birthright citizenship standards [emphasis in original]:

Some scholars contend that “subject to the jurisdiction thereof” refers to a “partial” jurisdiction (e.g., when a citizen travels to a foreign land and is subject to the criminal laws of that foreign land), and some contend that it refers to a “complete” jurisdiction, which means political allegiance (hence, jus sanguinis). This “natural born Citizen” presidential requirement was debated during the 2000 and 2008 presidential campaigns of McCain (born in the Panama Canal Zone), the 2016 presidential campaign of Cruz (born in Calgary, Alberta), and at other times. In Harris’ case, because her parents were not U.S. citizens at the time of her birth, her “natural born Citizen” status—a constitutional requirement for the presidency—is necessarily dependent on whether the 14th Amendment Citizenship Clause mandates jus soli, as opposed to just jus sanguinis (holding aside any independent congressional legislation in this field).

“The entire editor’s note here is also ridiculous,” noted immigration law expert Aaron Reichlin-Melnick. “There is no genuine scholarly debate about any of these issues. There are a handful of outliers like Eastman who try to argue that the Citizenship Clause is debatable, then there’s the 99.9% of scholars who think that’s bunk.”

“Look, lawyers engage in sophistry all the time,” he added. “It’s an entire field where people look at the plain text of a law and make an argument that it means something different from everyone else thinks. Outlandish ideas sometimes win. But at the same time, some things are settled. The more we air these absurd arguments, the more we normalize them.”

Trump: "I heard it today that she doesn't meet the requirements. And, by the way, the lawyer that wrote that piece is a very qualified, very talented lawyer."

Kamala Harris was born in California.