Appeals Court Tosses Texas Voter Protections: Right to Vote Is Not Guaranteed by Due Process Clause of Constitution 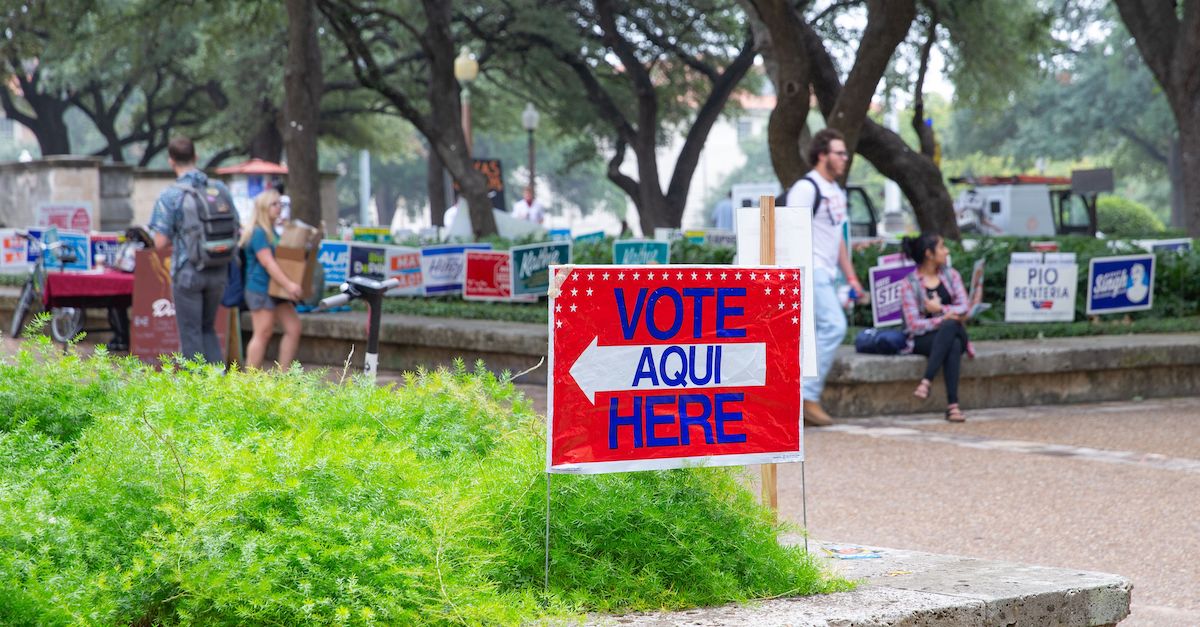 Students at the University of Texas in Austin participate in the “Walkout to Vote” event on November 6, 2018 in Austin, Texas.

A federal appeals court in New Orleans tossed out a series of voting rights measures for the 2020 election in Texas on Monday. The U.S. Court of Appeals for the Fifth Circuit restored the Lone Star State’s statutory absentee ballot rejection scheme in an order that stays a lower court’s injunction from September.

In that prior ruling, U.S. District Judge for the Western District of Texas Orlando Garcia required election officials to notify voters whose ballots were rejected due to a signature mismatch issue.

The lower court’s injunction also forced Texas Secretary of State Ruth Hughs (R) to instruct county election officials that if they did not institute a working system to contact voters with rejected ballots they could not reject any such ballots whatsoever. Officials in violation were subject to mandatory punishment under the order as well.

Nearly one week into Texas’s early voting period, the three-judge panel rejected the lower court’s efforts at creating a method for frustrated voters to have a second chance at voting by mail.

Specifically, the Fifth Circuit determined that the plaintiffs don’t have a 14th Amendment liberty interest in the right to vote by mail and that the district court used the wrong constitutional test to determine the plaintiffs’ interests in the first place. In issuing their decision, the Republican-appointed judges spent several pages upbraiding lower courts for previously endorsing the idea that voting is protected by the Constitution’s guarantee of procedural Due Process.

The decision is also, perhaps unsurprisingly, heavy with references to the allegedly heightened risk of fraud when voting by mail:

The United States is a few days from the November 3, 2020, General Election. Texas officials are preparing for a dramatic increase of mail-in voting, driven by a global pandemic. One of their many pressing concerns is to ensure the integrity of the ballot by adhering to the state’s election-security procedures. And the importance of electoral vigilance rises with the increase in the number of mail-in ballots, a form of voting in which “the potential and reality of fraud is much greater . . . than with in-person voting.” “Absentee ballots remain the largest source of potential voter fraud . . . .”

“In a well-intentioned but sweeping order issued less than two months before the election, however, the district court minimizes Texas’s interest in preserving the integrity of its elections and takes it upon itself to rewrite the Legislature’s mail-in ballot signature-verification and voter-notification procedures,” the opinion and order continues. “At a time when the need to ensure election security is at its zenith, the district court orders that, if the Secretary of State does not adopt its preferred procedures, election officials must stop altogether rejecting ballots with mismatched signatures.”

Under Texas law, election officials can reject ballots on the basis of a signature mismatch by comparing a voter’s carrier envelope signature to their absentee ballot application signature–with the optional aid of signatures “the voter made within the preceding six years and on file with the county clerk or voter registrar.”

Texas law mandates that at least one independent election body make such decisions–but allows local officials to create a separate signature-specific body to do the first round of mail-in ballot sorting. Decisions are made by a simple majority vote. If either of those two bodies decides to accept voter’s mail-in ballot, the other body cannot overrule the acceptance of a ballot–but a decision to throw out a ballot can be overruled.

In their original lawsuit, the plaintiffs argued that this was an “untimely notice of rejection and [provided] no meaningful opportunity to cure” which they further reasoned amounted to “complete disenfranchisement.”

Elected Republican leaders in Texas disagreed with the plaintiffs and the lower court–and the three GOP-appointed judges on the appellate court endorsed that position.

“We agree with the Secretary [of State] that Texas’s interest in preventing voter fraud justifies its signature-verification requirement,” Ronald Reagan-appointed Circuit Judge Jerry E. Smith wrote. He was joined in his opinion by President Donald Trump-appointed Judge Andrew Oldham.

Fellow Reagan-appointed Judge Patrick E. Higginbotham concurred in the ruling to issue the stay pending the case’s full appeal but argued that a change to the state’s election laws “when voting is already underway” is an inadvisable decision likely to result in confusion and that the panel’s decision would almost certainly lack any precedential value.