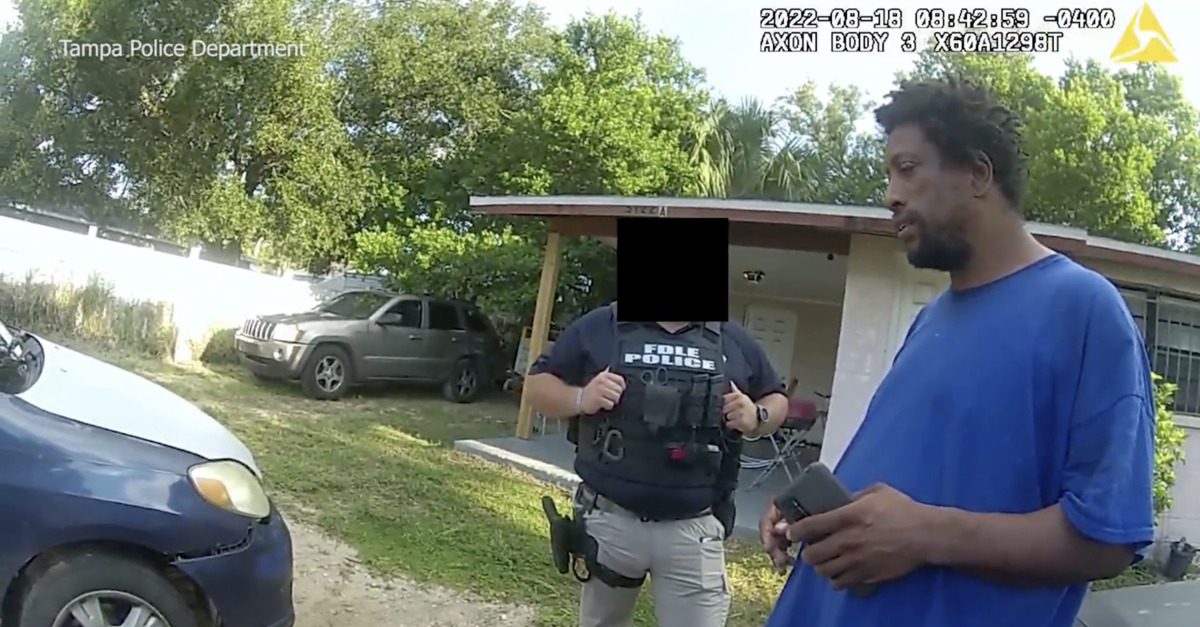 Prosecutors in Florida have dropped charges against a man arrested for voting in August. The dropped charges are a setback to Gov. Ron DeSantis after his self-touted, highly-publicized, and instantly politicized sweeps targeting people who allegedly cast ballots illegally earlier this year.

Tony Patterson, 44, hails from Tampa. His arrest, captured on police-worn body camera footage, became something of a lodestar for the controversy over charges leveled against 20 individuals by the Florida Office of Election Crimes and Security, a vote-policing agency that operates under the aegis of the Sunshine State’s Department of State.

“Y’all said anybody with a felony could vote,” Patterson said on the video of his arrest – which was widely shared when it was released in October. “What you mean, I couldn’t vote? I don’t know this. How I’m supposed to know I can’t vote, man? And why y’all doing this now?”

“Why would you let me vote if I wasn’t able to vote?” Patterson went on to ask one of the many arresting officers serving his warrant.

According to the Tampa Bay Times, state prosecutors said they were dropping the charges based upon “information received” from the Hillsborough County elections supervisor and because Patterson was already being sentenced in a separate case.

In September, Patterson was sentenced to one year and one day in state prison after pleading no contest to one charge of failing to notify law enforcement about a vehicle registration change, the paper reports. That precondition on his access to automobiles is premised on his previous conviction as a sex offender. In Florida, such changes must be reported within 48 hours.

Multiple people arrested in Florida during the voting sweeps were expressly told that they were allowed to vote, according to MSNBC. Some of them, including Patterson, were cleared by state officials to receive – and then did receive – voter ID cards.

Another man caught up in the sweep, Peter Washington, was sent a voter registration form by the Orange County Supervisor of Elections in Florida, MSNBC reported. Suspecting that he was cleared to vote, he filled out the paperwork and was, like Patterson, provided a voter ID card. Washington was arrested two years later.

According to court documents in Patterson’s case obtained by Tampa/St. Petersburg CBS affiliate WTSP, prosecutors wrote the words “nolle prosequi” — Latin for “unwilling to pursue” — and, which, in legalese, is typically transliterated as “will not prosecute.”

Patterson is the second Florida resident to have his voting fraud case dropped or dismissed in as many months.

In late October, a judge threw out voter fraud charges against Robert Lee Wood, 56, who was also arrested during the DeSantis crackdown. Miami-Dade Circuit Judge Milton Hirsch dismissed the case because Wood was prosecuted by an agency that lacked jurisdiction to do so.

The present prosecution is brought, not by the Miami-Dade State Attorney’s Office, but by the Office of the Statewide Prosecutor (“OSP”). OSP is empowered to bring criminal prosecutions in Florida when one of two conditions is met: either the demised crime must have occurred “in two or more judicial circuits as part of a related transaction,” or the crime must be “connected with an organized criminal conspiracy affecting two or more judicial circuits.”

That dismissal, however, is being appealed by state prosecutors.

Patterson’s attorney previously seized upon the Wood dismissal, according to the Tampa Bay Times, prompting prosecutor Nick Cox to try and counter the jurisdictional argument in Hillsborough County earlier this month. Prosecutors had a written reply brief due – specifically regarding the jurisdictional issue – when they moved to dismiss Patterson’s case on their own accord.

The locus of most of the confusion and consternation over the arrests is the 2018 passage of a constitutional amendment that was approved by a super-majority of Florida voters. That constitutional amendment was widely celebrated by voting rights advocates because it eliminated Florida’s Jim Crow-era ban on extending the franchise to people convicted of felony offenses.

During that midterm election, some 65 percent of Floridians voted in favor of Amendment 4 – which would have allowed roughly 1.5 million previously disenfranchised Floridians the right to vote.

What might have amounted to a revolutionary change in Florida’s electorate was stymied by a GOP effort to pass SB 7066, a law implementing the amendment while also preconditioning the restoration of voting rights on the ability of individuals to pay off all fines and fees associated with their convictions.

Decried by critics as a resuscitated “poll tax,” the U.S. Court of Appeals for the 11th Circuit upheld the implementing legislation in September 2020 after nearly two years of intense litigation.

Many voters who had yet to pay such fines likely participated in the 2020 presidential election unaware that the constitutional amendment had, intentionally but belatedly, not lived up to its promise – or at least to all of the initial media coverage of its passage.

Patterson, on the other hand, likely was not allowed to vote under any circumstance. Amendment 4 also expressly said voting rights would not be restored for individuals convicted of murder or felony sexual assault.