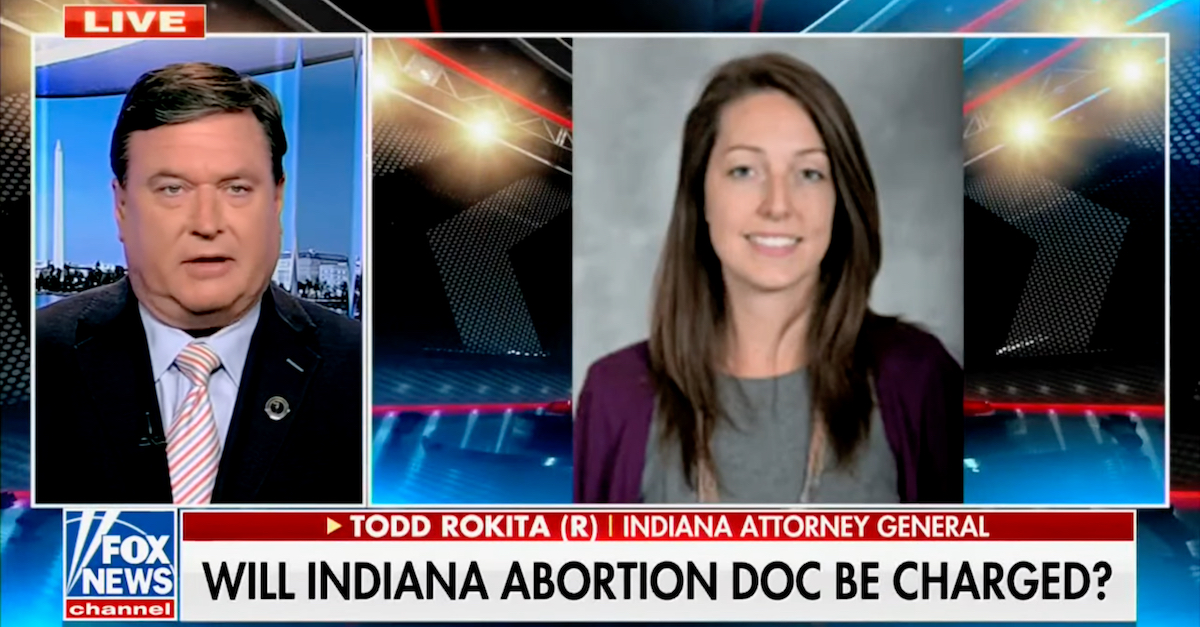 Indiana’s attorney general is not backing down from his investigation into a doctor who provided an abortion to a 10-year-old girl from Ohio.

Dr. Caitlin Bernard and her medical partner Amy Caldwell, M.D., sued Attorney General Todd Rokita (R) earlier this month alleging that his investigation into their medical practice is based on “nonsensical” consumer complaints against the doctors. As part of that lawsuit, Bernard’s lawyers filed an emergency preliminary injunction request, asking Marion Superior Court Judge Heather Welch to prohibit the attorney general from issuing subpoenas in furtherance of the investigation.

The full lawsuit seeks to block Rokita from using frivolous consumer complaints as the basis for issuing subpoenas seeking confidential and sensitive medical records and from continuing his investigation into physicians.

Judge Welch held a hearing on that motion on Monday. By Tuesday, both camps issued strongly-worded statements, with Rokita insisting that Bernard had violated Indiana law and Bernard insisting that the AG’s investigation is nothing but political maneuvering and a cover for violating patient privacy rights.

“If the doctor did not choose to use her patient, a 10-year-old rape victim, to further her own political agenda, we would not be here today,” Rokita’s office said in court filings, according to a statement from the attorney general’s office.

Rokita, who had announced on Fox News that his office was investigating Bernard for providing the abortion, criticized the doctor for sharing the story of the child rape victim with a reporter for the Indianapolis Star. The child was unable to obtain an abortion in her home state of Ohio following the Supreme Court’s ruling in Dobbs v. Jackson Women’s Health Organization.

“There is no defensible reason for this doctor to shatter her 10-year-old patient’s trust by divulging her abortion procedure to a reporter so her traumatizing experience could be used in the polarizing abortion debate on the heels of Dobbs,” Rokita said in the statement.

In the Indianapolis Star story, Bernard provided the outlines of the case — that a 10-year-old abuse victim could not get an abortion in her home state, so she came to neighboring Indiana — but did not share the child’s name, race, or home county. Legal experts have told Law&Crime that sharing that information is not enough, by itself, to trigger a potential violation of the Health Insurance Portability and Accountability Act (HIPAA) because it would not lead to the patient being identified.

Rokita said that evidence “strongly suggests that the doctor violated the mandatory reporting law, which required her to immediately report the child’s abuse to Indiana authorities.”

“Only by reporting to Indiana authorities immediately, as called for by statute, might the little girl have been spared from potentially being sent back to her perpetrator,” the statement continued.

The Hoosier State statute that requires abortions to be reported to the government, Indiana Code § 16-34-2, does not appear to include the word “immediate” or “immediately” in relevant context.  The only usage of that word in the relevant statute requires an abortion doctor to “provide immediate care for a child born alive as a result of the abortion” and states that a child who survives an abortion “shall immediately upon birth become a ward of the department of child services” if the child’s parents indicate they wish to relinquish custody.

Indeed, Indiana Code § 16-34-2-5 indicates a different time frame from that indicated by Rokita:

The health care provider shall complete the form provided for in subsection (a) and shall transmit the completed form to the state department, in the manner specified on the form, within thirty (30) days after the date of each abortion. However, if an abortion is for a female who is less than sixteen (16) years of age, the health care provider shall transmit the form to the state department of health and separately to the department of child services within three (3) days after the abortion is performed.

It is unclear why Rokita said Bernard needed to “immediately” report the procedure when the statute appears to contemplate a three-day window.

As Law&Crime previously reported, the assault on the patient allegedly occurred on May 12, and a police report about the rape was generated in Ohio on June 22, 2022. Bernard performed the abortion on June 30.

Rokita’s office did not immediately respond to an emailed request from Law&Crime for additional information on what steps the state could have taken that would have kept the girl safe from her alleged attacker, who has been arrested and charged in Ohio. An investigation by Indiana University revealed that Bernard appeared to have been in compliance with the law, and local media reports showed that Bernard reported the relevant procedure on July 2 — two days after the abortion and within the three-day window required by Indiana Code § 16-34-2-5.

In a statement issued Tuesday following Monday’s emergency hearing, lawyers for Bernard said that the doctor had testified that she complied with all reporting and privacy laws in connection with the case and that she has fully cooperated with the law enforcement investigation.

DeLaney added that Bernard’s testimony “confirms she fully complied with those laws and assisted the law enforcement investigation that resulted in the arrest of the suspected abuser.”

“The evidence also showed that the Attorney General’s office continues to this day to investigate multiple invalid complaints against my client despite evidence showing she upheld her duty,” DeLaney added.

Bernard said that, despite Rokita’s accusation that the doctor violated her patient’s privacy, she is in fact fighting to protect the privacy of all patients in Indiana.

“As a physician, I never imagined that I would need to engage in a legal battle to protect the rights of women and girls to not have their private medical records released for political purposes,” Bernard said in the statement. “But nonetheless, I feel strongly that this fight — the fight for physicians to compassionately provide abortion care to every single person who needs their care and to fight for their patients’ access to safe, legal abortion care, free from fear of criminalization — is worth waging. And this is not just about abortion care, but all private medical care, something that should never be intruded upon in the name of politics.”

Judge Welch is expected to issue a ruling on the preliminary injunction motion next week, DeLaney said.

This past summer, Dr. Bernard came under attack after the Indianapolis Star reported that she provided medical and reproductive care for a 10-year-old child abuse victim days after the groundbreaking Supreme Court decision to overturn Roe v. Wade. Since then, Rokita has been accused of making misleading statements about the facts of the case to local and national news sources, even after it was confirmed by public records requests that Dr. Bernard appeared to have complied with all applicable reporting laws. Through this lawsuit, Dr. Bernard and Dr. Caldwell, along with their patients, seek to stop Rokita from infringing upon patient-doctor confidentiality and prevent future unchecked oversteps by the Attorney General.