Woman Who Said She ‘Fought Hard’ to Reach the Capitol on Jan. 6 Should Get 3 Months of Home Confinement: Feds 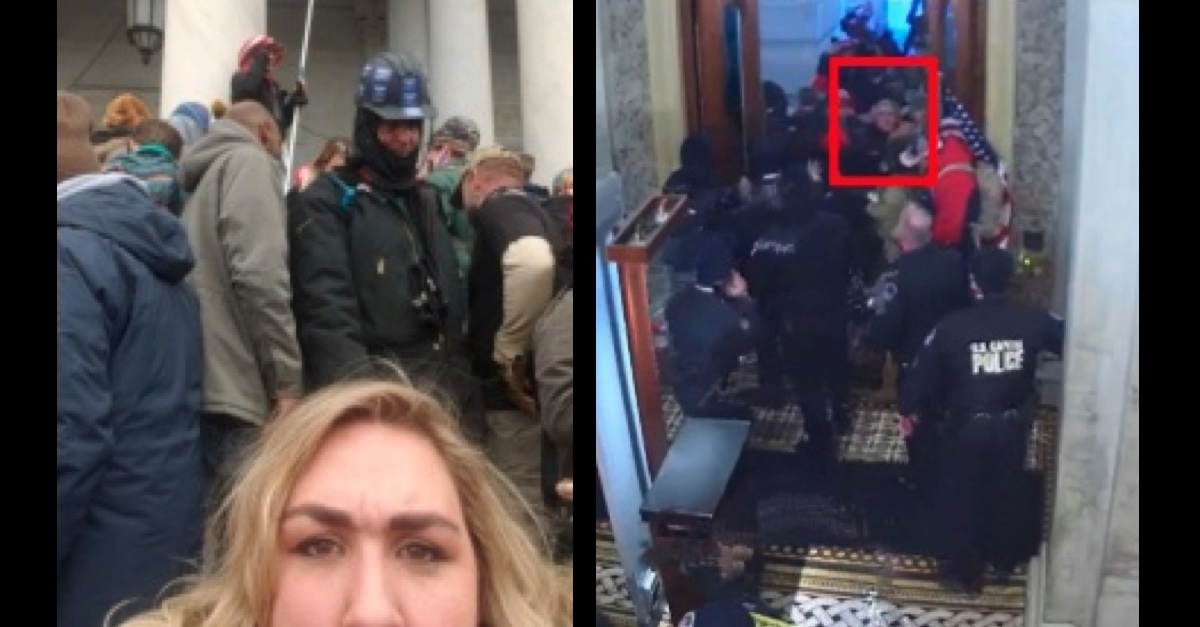 Federal prosecutors have asked for home confinement in the case of a Jan. 6 rioter who claimed she “was there” on the steps of the Capitol building, and “fought hard” to get inside.

Brittiany Dillon should be sentenced to three months of home confinement, according to the government’s sentencing memorandum filed Monday, along with three years of probation, 60 hours of community service, and $500 in restitution.

“The defendant stands before this Court to be sentenced on a misdemeanor conviction,” the memo said, “but her conduct on January 6, like the conduct of scores of other defendants, took place in the context of a large and violent riot that relied on numbers to overwhelm law enforcement, breach the Capitol, and disrupt the proceedings [to certify the 2020 presidential election]. But for her actions alongside so many others, the riot likely would have failed.”

The sentencing memo said that Dillon’s actions were driven by her belief in debunked conspiracy theories about voter fraud in the 2020 presidential election, which Donald Trump lost to Joe Biden.

According to the memo, Dillon sent the following message to a fellow rioter in December of 2020, in which they discussed false information about the results of the presidential election.

So..republican electors have been sent to a few of the states in question
[presumably, Arizona, Georgia, Pennsylvania, and Wisconsin]. MI has had some
voter fraud arrests. Declass may be imminent. With all the info on CCP [Chinese
Communist Party] Members being outted and having infiltrated every govt and corp
they won’t be able to do much. Worse case scenario there will be a legit military
coup..not against 45 [former President Trump] but against the deep state.

Dillon also believed that Maryland’s response to the coronavirus pandemic was “a test run to get us all stocked up,” and that she thought “[w]e may lose all communications. An all out civil war may start. It will be fast because our side is more prepared.” Dillon believed that soldiers from China had “infiltrated” Canada and Maine and were bombed by the U.S. government, but that news media didn’t cover these events because they “lie outright by omission” and “keep everyone hypnotized.”

Dillon also told her fellow rioter that she no longer supported law enforcement, at least those officers who pushed back against rioters on Jan. 6.

“Never again!!! They are devils,” Dillon said via text.

Dillon was ultimately held off by riot control officers, and said in text messages that she was “pepper sprayed” and “tear gassed” while at the door of the building.

According to the federal complaint, Capitol security video footage showed Dillon at the threshold of the Capitol building, pushing through the crowd in an apparent attempt to get inside.

Dillon pleaded guilty in June to disorderly conduct. That charge would normally carry a potential sentence of six months in prison, a $5,000 fine, and up to a year of supervised release. However, Dillon’s plea agreement included the stipulation that federal sentencing guidelines would not apply.

In the sentencing memo, prosecutors noted that although Dillon was charged with a misdemeanor, and “did not personally engage in or espouse violence or property destruction on January 6,” she should still be held accountable.

“As this Court knows, a riot cannot occur without rioters, and each rioter’s actions—from the most mundane to the most violent—contributed, directly and indirectly, to the violence and destruction of that day,” the filing said.

Read the complaint against Dillon and the government’s sentencing memo, below.

[Images via the U.S. Department of Justice]