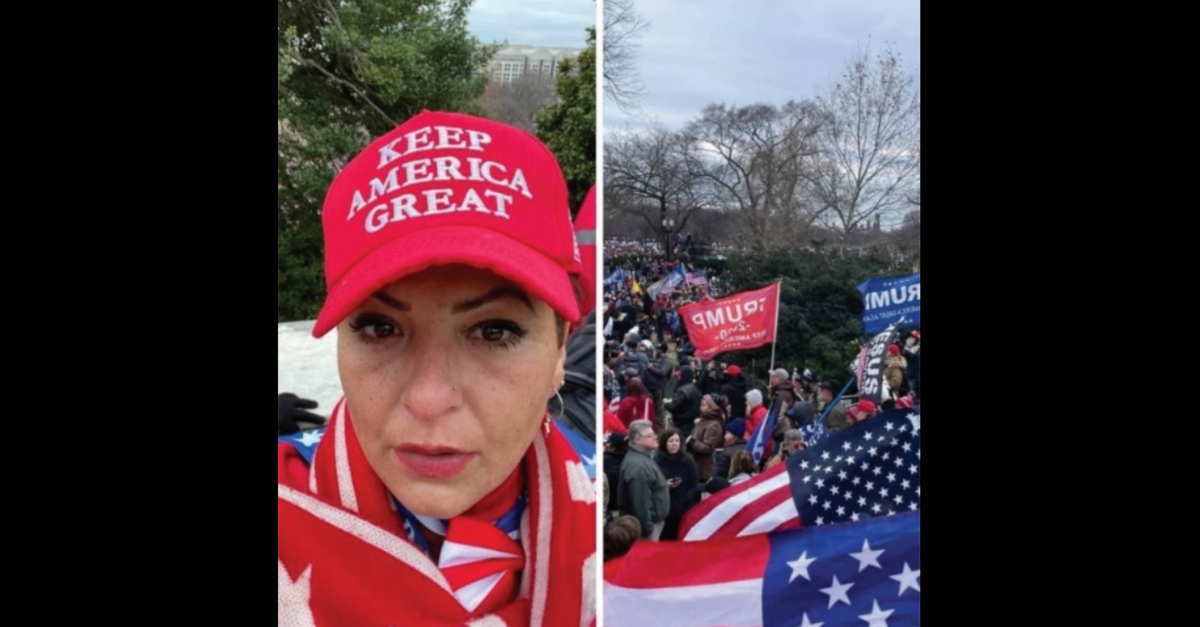 A New Jersey woman has been identified as yet another defendant in the D.C. insurrection. Rasha Abual-Ragheb was charged after she allegedly showed a person a picture of herself inside the Capitol Building.

The defendant allegedly told investigators details of her life story, including that she fled the Lebanese Civil War as a child, went to the nation of Jordan, and then moved to the United States, where she has resided for 21 years. Now, Abual-Ragheb is a Donald Trump supporter who faces charges in connection with the Jan. 6 riot. The feds say she believed that a “civil war is coming.”

“Just left Dc… I got tear gas, paper spray!!! But I was part of the history,” the defendant wrote in a Facebook post cited by the Federal Bureau of Investigation. “We the people won’t take it anymore. Antifa were between us, i and other MAGA people told Dc police, get that Antifa they didn’t do anything. He had black metal chair… The police would order to use full force on us from the beginning when we start marching to the capital, the use teargas and pepper spray and rubber bullet, they shot the woman that was standing peacefully without a a weapon, they hit women’s kids. They hit people with the pat metal one.”

Supporters for then-President Trump raided the Capitol Building on Jan. 6 after he falsely told them for months that he actually won the 2020 presidential election in a landslide. He told them it was stolen. At least one Facebook post included as an exhibit by the FBI showed the defendant using the #StopTheSteal hashtag. 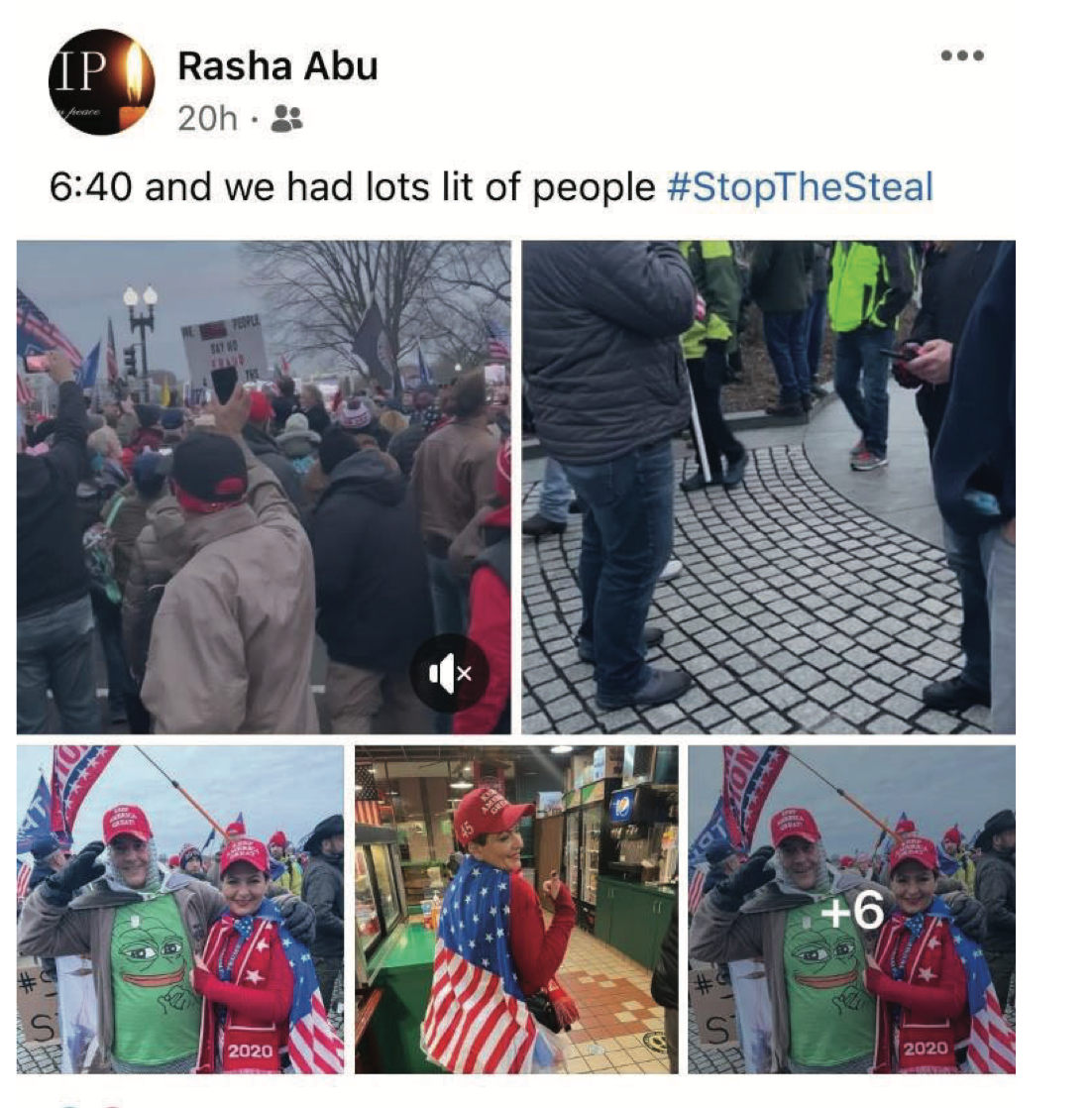 Investigators said that the Abual-Ragheb landed on their radar after a couple of tipsters reached out. One of them provided the defendant’s Facebook account, in which the defendant wrote about her trip to D.C. The other tipster claimed to have encountered her on the sidewalk of the Kimpton George Hotel in D.C. while she was, in the FBI’s words, “making a scene.” The defendant identified herself as “Rasha,” and showed this person this picture. 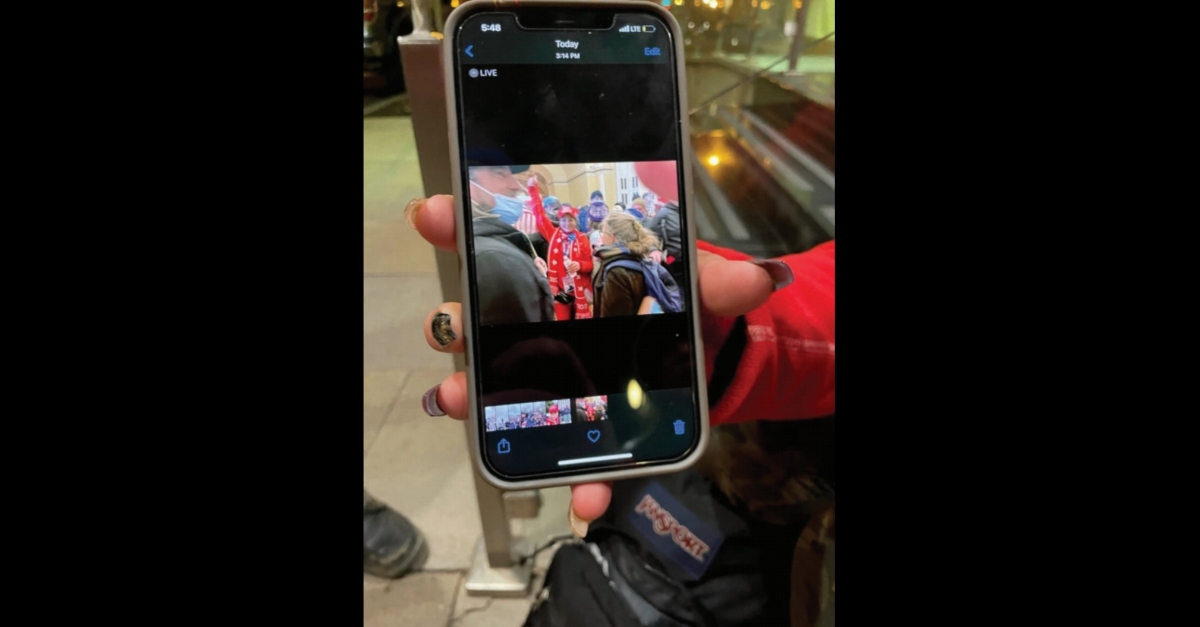 In this account, Abual-Ragheb said she was in the Capitol Building and witnessed a woman being shot. (The account doesn’t specify if this was the aforementioned rubber bullet story, or if this was supposed to be in regard to Ashli Babbitt, 35, who was shot and killed by law enforcement while she and other rioters were trying to break into the Speaker’s Lobby.)

The defendant faces charges including knowingly entering or remaining in any restricted building or grounds without lawful authority to do so. Peter Michael Carter, an attorney of record, declined to comment when Law&Crime reached him on the phone.

Judging by the official story, Ragheb made no secret of being a Trump supporter. In a Facebook chat, she said that, in the FBI’s words, “revolution will start not by standing by but by standing up. In addition, she advised civil war is coming and they need to show support, and rise up and fight for our Constitution.” From the affidavit:

During the interview [with the FBI], she advised she was a Trump supporter, attended Trump rallies, and was blocked from making posts on Facebook and Twitter for pro-Trump postings. Additionally, Rasha Abual-Ragheb advised she was born in Lebanon and fled to Jordan when she was a child due to the civil war there. She further advised that she has lived in the United States for 21 years and she provided the interviewing agents with her telephone number.