Texas Supreme Court Silently Denies Alex Jones All Forms of Relief: Sandy Hook Families and Others Can Now Sue Conspiracy Theorist and InfoWars into the Ground 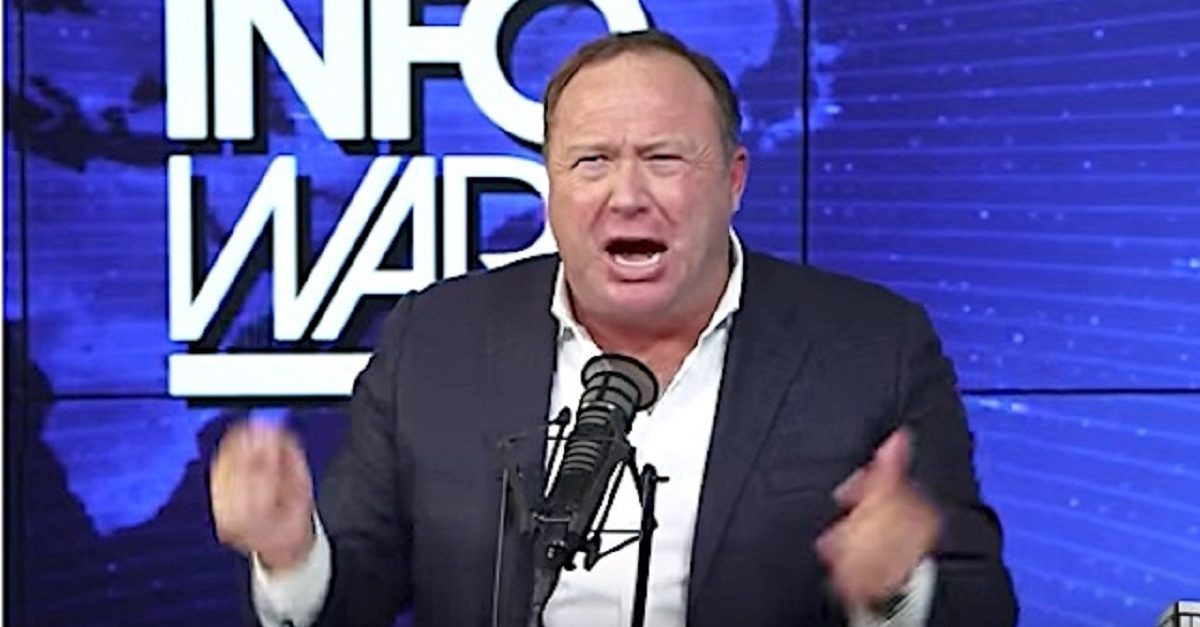 An empire built on conjecture, conspiracy and a series of fake homeopathic cures for various ailments stands to be sued into oblivion after a Friday ruling by the Supreme Court of Texas.

Without comment, the Lone Star State’s highest civil court found that America’s foremost conspiracy theorist, Alex Jones, and his flagship media outlet, InfoWars, are subject to liability in four separate defamation lawsuits filed over the past two-plus years. Those lawsuits were filed by parents of children who were killed during the Sandy Hook massacre and by a man Jones and his network falsely identified as the perpetrator of the Parkland massacre at Marjory Stoneman Douglas High School. 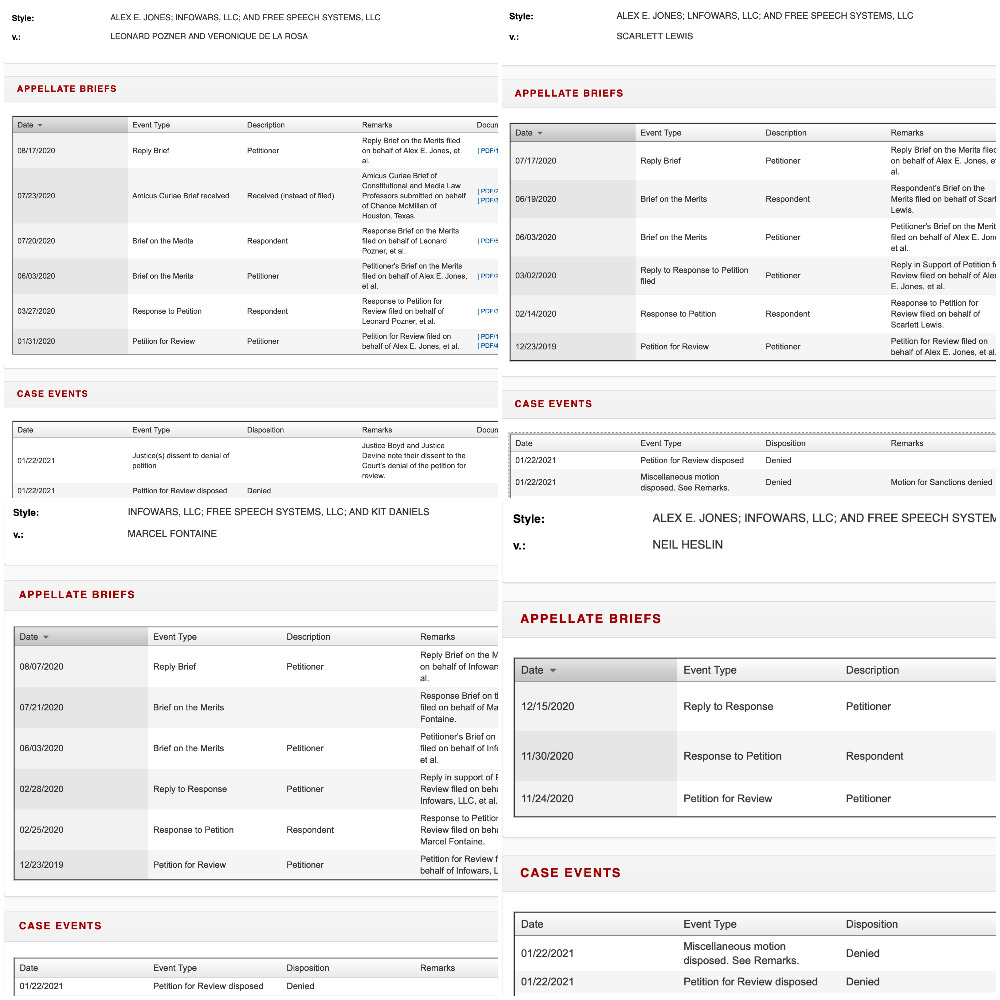 Each of the four lawsuits were filed in Travis County, the largest of three counties contained in the City of Austin, the Texas state capitol. With an ever-present image in the once-sleepy college town home to the nation’s leading “Public Ivy,” the University of Texas, Jones is something of a household name after spreading the false gospel for well over two decades after getting his start in the freewheeling world of public-access cable programming.

Jones took a turn toward conspiracy following Timothy McVeigh’s 1995 bombing of the Alfred P. Murrah Federal Building in Oklahoma City. The bombastic host accused the government of orchestrating the grisly incident—naturally, with no evidence—and never looked back.

Immediately after the 2012 shooting that left 20 children and six teachers dead in Newtown, Connecticut, Jones used his by-then vast platform to spread the idea that the murders were part of a “false flag” operation meant to scare the population into giving up their guns and Second Amendment rights. Jones also smeared the parents of the dead children, calling them “crisis actors.” None of those claims were true but the pernicious ideas gained traction among the easily-influenced.

“So, if children were lost at Sandy Hook, my heart goes out to each and every one of those parents,” Jones said in a 2016 broadcast typical of the genre. “And the people who say they’re parents that I see on the news. The only problem is, I’ve watched a lot of soap operas. And I’ve seen actors before. And I know when I’m watching a movie and when I’m watching something real.”

Two initial defamation lawsuits were filed the same week against Jones and InfoWars during the spring of 2018.

Leonard Pozner and his ex-wife, Veronique De La Rosa, sued the conspiracy theorist and his biggest misinformation platform in the 345th Civil District Court. Neil Heslin filed a substantially similar lawsuit in the 53rd Civil District Court. Each of the plaintiffs were represented by Houston-area attorney Mark Bankston. Heslin later filed a second lawsuit against Jones and his fast-crumbling media network in the 261st Civil District Court.

“Our clients have been tormented for five years by Mr. Jones’ ghoulish accusations that they are actors who faked their children’s deaths as part of a fraud on the American people,” Bankston said in a statement at the time, “Enough is enough.”

“Since the day of the shooting, InfoWars has aggressively promoted a dreadful and despicable false narrative about Sandy Hook, mocking the families as liars and accusing them of a sinister conspiracy. Plaintiff’s family has been specifically targeted in this campaign of harassment,” the Lewis original petition alleged. “These baseless and vile accusations, which have been pushed by InfoWars and Mr. Jones a continuous basis since the shooting, advance the idea that the Sandy Hook massacre did not happen, or that it was staged by the government and concealed using actors, and that the families of the victims are participants in a horrifying cover-up. InfoWars knew its assertions were false or made these statements with reckless and outrageous disregard for their truth.”

Marcel Fontane, a Massachusetts resident who has never been to Florida, also sued Jones and InfoWars during the spring of 2018 after being singled out by Jones and InfoWars reporter Kit Daniels–falsely accusing him of being the Parkland shooter in a vain attempt to link the massacre to the political far-left. The outlet also published a photograph of Fontaine wearing a satirical t-shirt depicting several former Communist historical figures.

The article was featured on the front page on the InfoWars website on February 14, 2018, the day of the Douglas High School shooting. The article, of which every element was factually incorrect, was also featured on social media accounts belonging to InfoWars and Kit Daniels.

Multiple iterations of the article included a photograph of the Plaintiff, Marcel Fontaine, and the articles conveyed the impression that the photograph depicted the suspected Douglas High School shooter.

“Mr. Jones and Infowars have long been consumed with paranoia over the prospect of communist infiltration and indoctrination,” the lawsuit, filed in the 459th Civil District Court, noted later. “Over the past year alone, Infowars has featured hundreds of sensationalist articles and videos focusing on the threat of communist agitation and conspiracies.”

Each of the Texas lawsuits seek damages in excess of $1 million.

Jones repeatedly sought to have the filings dismissed during various stages of the legal process. Each time, the district courts and the appellate courts declined to toss the claims.

Now, each of those four lawsuits can proceed on the merits.

Notably, Texas Supreme Court Justices Jeff Boyd and John Devine dissented from the ruling in the Pozner-De La Rosa lawsuit alone–but they did so in silence, offering no reasoning for their decision that would have granted a review of Jones’ petition.