Jenny Cudd Gets Permission to Go to Mexico | Law & Crime

Texas Florist Who Recorded Herself Bragging About Storming the Capitol Gets to Go to Mexico, Federal Judge Rules

A Texas florist who wrapped herself in a Trump flag and admitted on a video she recorded that “we did break down Nancy Pelosi’s office door” on Jan. 6 has been granted permission to travel outside of the United States later on in February. 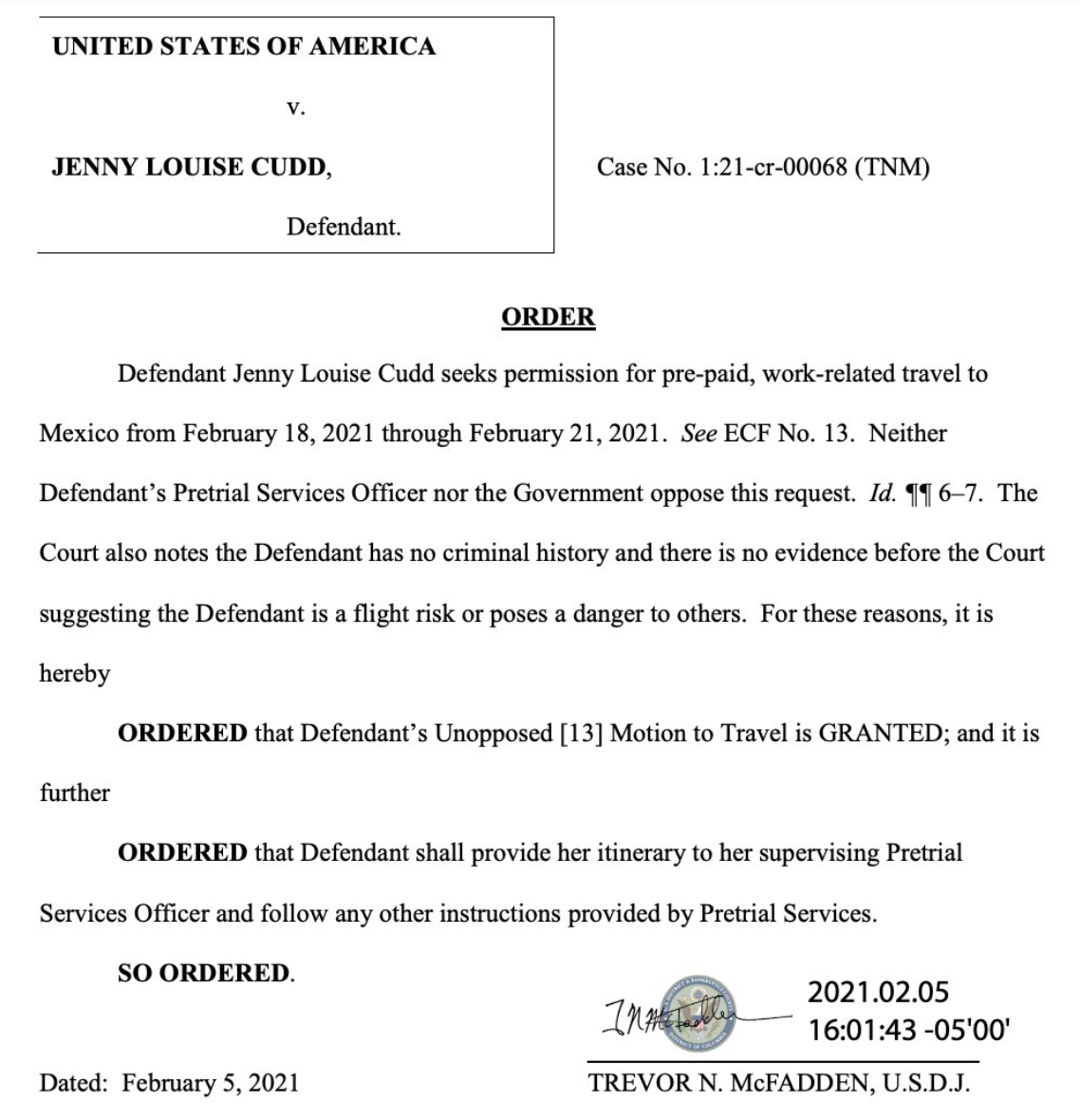 “Defendant Jenny Louise Cudd seeks permission for pre-paid, work-related travel to Mexico from February 18, 2021 through February 21, 2021. Neither Defendant’s Pretrial Services Officer nor the Government oppose this request,” McFadden noted. “The Court also notes the Defendant has no criminal history and there is no evidence before the Court suggesting the Defendant is a flight risk or poses a danger to others.”

There’s no dispute that Cudd was inside the Capitol. She recorded herself at the scene of the crime, then admitted her involvement on the record with a media outlet.

Now it's official: A judge is letting a woman charged in the Capitol siege travel to Mexico for a "work-related bonding trip."

The judge says there's no sign the defendant, Jenny Cudd, is a danger to others.

Two days after the siege, she said: "I would absolutely do it again." pic.twitter.com/H1tttsr84f

The order from McFadden came down one day after Cudd was indicted on five federal counts.

Cudd and her alleged accomplice Eliel Rosa were each hit with misdemeanor offenses and the more serious felony charge of corruptly obstructing, influencing and impeding an official proceeding. Social media outcry erupted earlier in the week when incorrect viral stories from the Daily Beast and USA Today stated that Cudd was granted permission to travel. Those stories jumped the gun; the docket only showed a proposed order to permit travel, not an actual signed order granting such permission.

Now Cudd has a signed order, so we anticipate the outcry will resume posthaste.

Here’s what Cudd’s lawyers said about why she needs to travel.

“Prior to the alleged offense at issue, Ms. Cudd planned and prepaid for a weekend retreat with her employees for the dates of February 18 through February 21, 2021, in Riviera Maya, Mexico,” court documents said. “This is a work-related bonding retreat for employees and their spouses.”

Some defense attorneys, however, have cautioned that the outrage over Cudd’s ability to travel in this instance is disproportionate.

I don't understand while people are freaking out over this. Such travel permissions are routinely granted. Get some perspective. https://t.co/1PHCn0YbeZ

Sure. But, seriously, I can't remember the last time I had such a request denied for one of my clients. Which kind of makes both points, because if they are paying us, either they or their family are probably not poor.

She's not charged with that.

Or is your view "you should be able to charge someone with two misdos but jail her as if she's charged with a death penalty offense"?

“I have had such a scenario and gotten approval,” New York City-based defense attorney, former prosecutor, and current Law&Crime Network legal analyst Julie Rendelman told Law&Crime on Thursday. “But such travel would be an exception to the norm.”

And, again, prosecutors did not oppose Cudd’s motion to travel.

Colin Kalmbacher and Alberto Luperon contributed to this report.