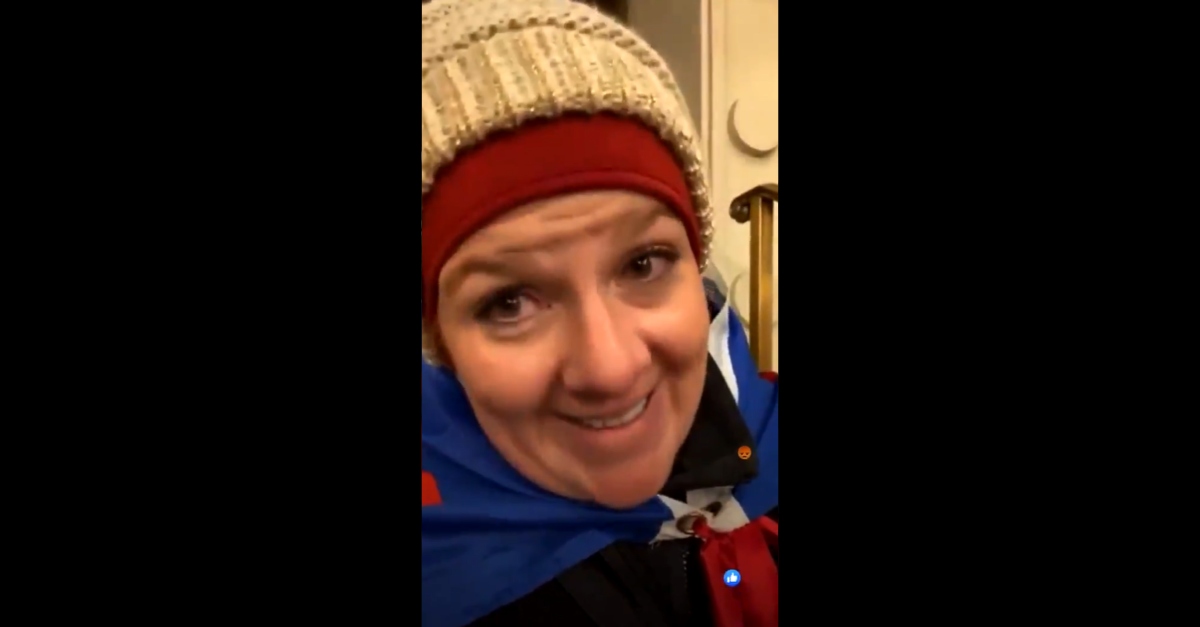 Attorneys for Texas woman Jenny Louise Cudd said she previously planned a work-related trip to Mexico set for later in February. There was just one thing standing in her way: she is one of dozens of Trump supporters who bought the former president’s lies about a stolen election and ended up getting charged by way of a criminal complaint for storming the Capitol on Jan. 6. On Thursday, Cudd’s legal troubles transformed into a much more serious five-count federal indictment.

But it’s not impossible.

“I have had such a scenario and gotten approval,” New York City-based defense attorney, former prosecutor, and current Law&Crime Network legal analyst Julie Rendelman noted. “But such travel would be an exception to the norm.”

Cudd and her alleged accomplice Eliel Rosa were each slapped with four relatively small-bore charges that equate to misdemeanors. The duo were also accused, however, of corruptly obstructing, influencing and impeding an official proceeding–which carries a maximum penalty of 20 years in federal prison.

Social media was scandalized earlier this week by the prospect that Cudd might get that trip to Mexico—an online and Twitter-fueled kerfuffle initiated by an incorrect viral stories from the Daily Beast and USA Today. Those stories have since been corrected.

Before the grand jury returned their verdict, Cudd’s lawyers asked the court to allow her to go to Mexico. The Tuesday outcry that occurred prompted some defense attorneys to throw cold water on the collective “freaking out.”

I don't understand while people are freaking out over this. Such travel permissions are routinely granted. Get some perspective. https://t.co/1PHCn0YbeZ

Erroneous reporting not withstanding, the outcry continued. But the docket only showed a proposed order to permit travel, not an actual signed order granting such permission.

When Cudd made her request to travel, her defense said that she only faced misdemeanor offenses, is on pretrial release, has no criminal history, runs a small business, is an established member of her community, has showed up to court, and communicates with her lawyer and pretrial probation.

“Prior to the alleged offense at issue, Ms. Cudd planned and prepaid for a weekend retreat with her employees for the dates of February 18 through February 21, 2021, in Riviera Maya, Mexico,” court documents said. “This is a work-related bonding retreat for employees and their spouses.”

Notably, Cudd has had one of her pending motions determined moot since the indictment was handed down. That motion had to do with Speedy Trial Act considerations. A judge has not addressed the motion to travel as of this writing. Cudd is currently free on a personal recognizance bond tending to her flowers in the Lone Star State.

Supporters of then-President Donald Trump raided the Capitol Building on Jan. 6 after he falsely told them he actually won a second term by a “landslide.”

The insurrectionists postponed but did not prevent Congress from counting Electoral College votes that went to since-inaugurated President Joe Biden. Five people died amid the chaos: four Trump supporters, and one Capitol police officer. Another Capitol officer, a D.C. Metro police officer, and an insurrectionist defendant died by suicide mere days after the day of infamy.

FBI agents have overwhelmingly cited the rioters’ social media activity, photographs from the media, and accounts from people who knew them when tying rioters to the Capitol siege. There’s no dispute that Cudd was inside the Capitol. She recorded herself at the scene of the crime, then admitted her involvement on the record with a media outlet.

Meet Jenny Cudd from Midland Texas “WE did break down @SpeakerPelosi‘s office door and somebody stole her gavel and I took a picture sitting in the chair flipping off the camera and that was on Fox News” @FBI pic.twitter.com/3s3aWgOJ9G