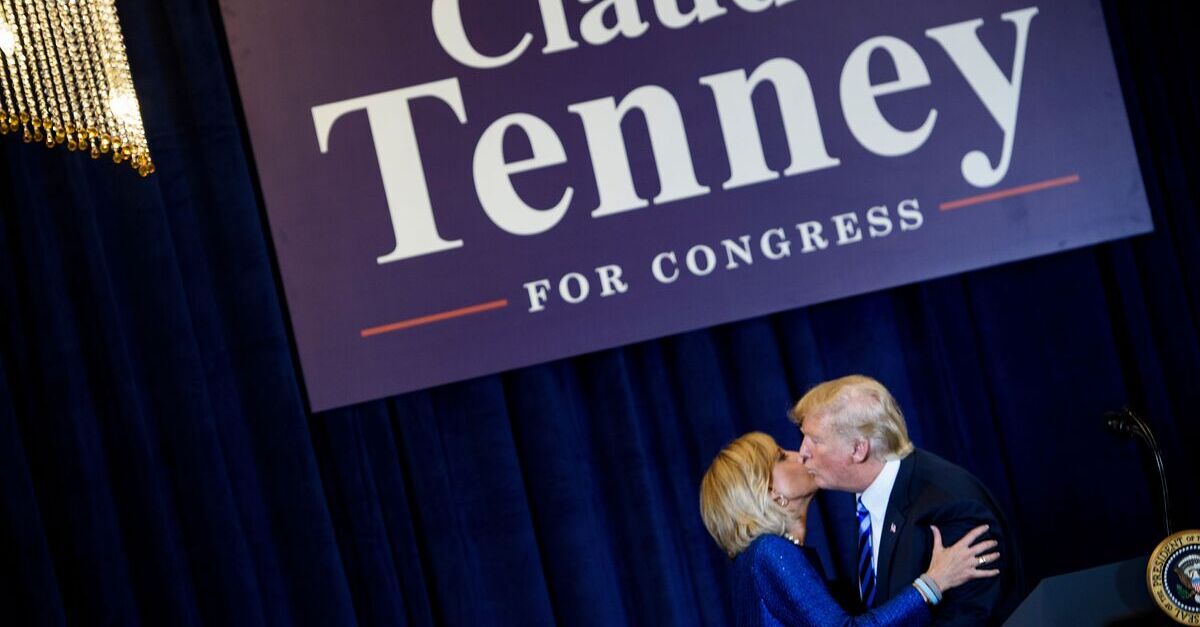 Donald Trump kisses US Representative Claudia Tenney during a fundraiser on August 13, 2018 in Utica, New York.

“I’ve been asked to stop this election,” DelConte told attorneys earlier on Friday during a hearing in which he signaled his ultimate order, “and that’s a very very high burden.”

Democratic powerhouse attorney Marc Elias recently signed on to a Perkins Coie motion asking for the trial court to delay ruling on the certification issue until appellate courts rule on pending requests to review the case and possibly recount certain ballots.

“[T]he portion of the Court’s order directing County Boards to certify election results should be stayed until a hand audit can be conducted and appeals resolved,” that order requested, citing “evidence of material discrepancies in vote tallies that potentially affect hundreds of ballots.”

The Perkins Coie filing also asked for the court itself to agree to a recount before moving forward with certification.

“[U]nder the law as applicable to the election at issue, where, as here, there is substantial evidence of deeply concerning errors and irregularities, any number of which ‘creates a substantial possibility’ that the outcome of the election could change as a result of a hand audit, the Court has the power and obligation to order a hand audit under the [relevant portion of New York State law].”

Elias, who recently came off a whirlwind electoral litigation tour battling against former president Donald Trump’s false claims about voter fraud and his allies’ claims that certain voting machines were the culprit for his loss to Joe Biden, cited the unreliability of voting machines in his efforts on Brandisi’s behalf.

All told, there was a discrepancy of nine changed votes during the second and third canvasses of Oneida’s administratively rejected affidavit and absentee ballots alone. Oneida County counted 1,127 ballots during the course of its second and third recanvasses. The nine-vote change yields an error rate of 0.8%. There were 325,548votes cast in total in the race for New York’s 22nd Congressional District. Applying the same error rate to 325,548 ballots, there may have been as many as 2,599 votes that the machines did not read. Even if the problem was with Oneida County tabulation machines only, of the around 100,000 ballots cast in Oneida, there may have been 800 votes that the Oneida County machines failed to read alone. That figure far exceeds the margin between the two candidates in this race, and based on this small sample size at least,appears to disproportionately affect Brindisi.

“In this case, there is reason to believe that voting tabulation machines misread hundreds if not thousands of valid votes as undervotes, and that these tabulation machine errors disproportionately affected Brindisi,” lead attorney Henry J. Brewster alleged. “In addition, Oswego County admitted in a sworn statement to this Court that its tabulation machines were not tested and calibrated in the days leading up to the November 3, 2020 General Election as required by state law and necessary to ensure that the counts generated by tabulation machines are accurate.”

There is still the possibility an appeals court could rule in the Democrat’s favor and later find—after a recount—that he did, in fact, win the election. DelConte noted that potential in his decision but said that New York State could then just alter their certification.

But Democrats say their only recourse at that point would be an appeal to the U.S. House of Representatives themselves.

Tenney was consistently ahead in the vote count over the centrist lawmaker–whose national profile was raised when he publicly warned his party against running on Medicare for All after previously supporting single-payer while in the New York State Assembly.

Wild swings in late-breaking votes kept Brindisi’s hopes alive, however, as a deluge of absentee and provisional ballots stood to upend the results of the race. Lawsuits followed. Many of those ballots were challenged.

The margin in the race, the Democratic motion noted, “has been a moving target for nearly three months,” as courts ruled on which ballots would count and which would be rejected in the Empire State—whose Democratic Party governance recently led to the highest ballot-rejection rate in the country.

Now that margin is wider than it has ever been. And the Democrat is formally on the losing end.