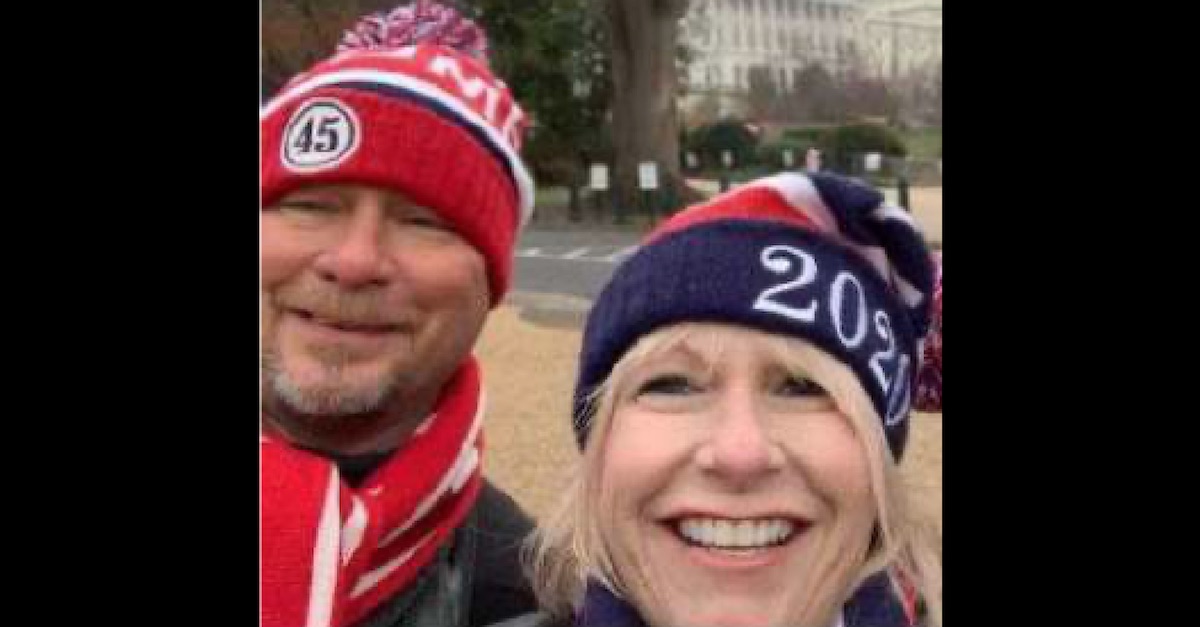 The Department of Justice says that a Forestburg, Texas couple was arrested on Wednesday, April 21 for allegedly assaulting cops who were dispatched to man barricades at the U.S. Capitol on Jan. 6. Mark Middleton, 52, and Jalise Middleton, 51, made their first appearances in federal court on Thursday in the Lone Star State.

According to the FBI’s statement of facts, there was ample evidence that the couple participated in the Jan. 6 siege, and some of the evidence was provided by the suspects themselves on social media. Importantly, however, tipsters identified only as acquaintances who saw those Facebook posts agreed to FBI interviews and told the feds what they saw.

One of those tipsters was described as the parent of girl who is an acquaintance of defendant Jalise Middleton.  Some of the tipsters are referred to in court documents only by the pronoun “it” in an apparent attempt to avoid identifying the tipster’s gender.

“The tipster reported that ITS daughter had seen numerous posts and photos on J MIDDLETON’s Facebook page following the Capitol riots indicating that J MIDDLETON had participated in the riot,” court documents say. Those posts and photos were not long for this world, however, because Jalise Middleton allegedly deleted them “about two days after posting them,” the feds said.

The precise familial relationships are somewhat lost in the cloak of the translation, but the bottom line, prosecutors allege, is that people were talking about the defendants causing trouble in D.C. Plus, the tipsters suggested that witnesses could pinpoint the defendants’ travels.

The government says that Metropolitan Police officers identified only T.T. and R.C. were assaulted by a group of rioters at the barricades of the “West Front” of the Capitol building on Jan. 6. Mark Middleton and Jalise Middleton allegedly took part in the attack.

As the struggle ensues, a male individual wearing a red, white, and blue “Trump” beanie hat, red and white scarf, gray or silver jacket, blue jeans, red and white “Nike” shoes, and gray backpack with a red logo on the back—later identified as Mark Middleton (“M MIDDLETON”)— pushes against the barricades and the police line with his body. As officers repeatedly order M MIDDLETON and other rioters to “get back,” M MIDDLETON is heard yelling “fuck you!” as he continues pushing against the barricade.

At the same time, a female individual wearing a red, white, and blue “Trump 2020” beanie hat, red, white, and blue scarf, gray jacket, red shirt, and gold ring with what appears to be diamonds—later identified as Jalise Middleton (“J MIDDLETON”)—repeatedly grabs and strikes T.T. over the barricade with her hand.

From here, the statement of facts discussed the Facebook posts the couple allegedly posted to their respective accounts. Mark Middleton allegedly recorded himself saying something incriminating.

“We are on the front lines. We helped push down the barriers. Jalise and I got pepper sprayed, clubbed, and tear gassed. We had to retreat, but more patriots pushed forward, and they’re taking back our house,” Middleton was quoted as saying. “They’ve got the giant flag up on the upper terrace up there. No more fooling around! Jalise and I gotta go back to the hotel and try to recoup and change, get dry clothes on. Make America great again! Freedom!”

Additional comments attributed to Mark Middleton do not appear to be exculpatory. 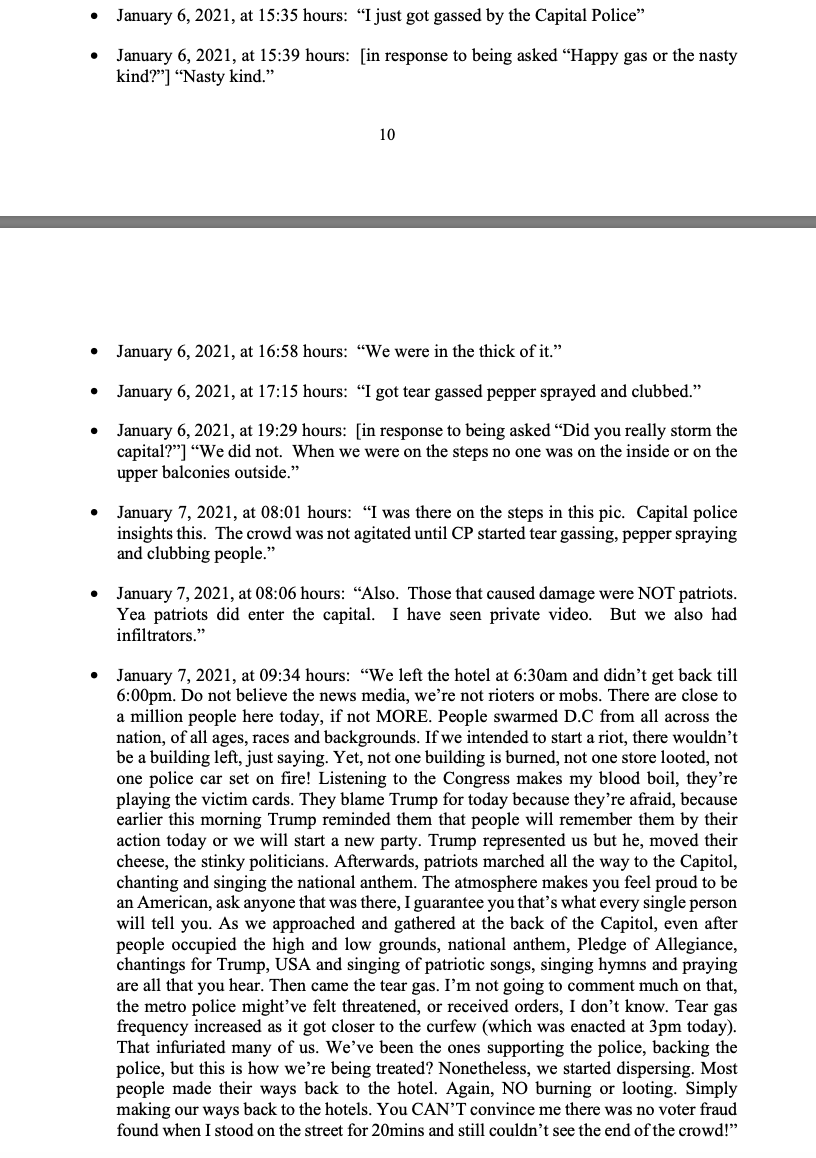 Jalise Middleton allegedly admitted in Facebook comments that she and her husband “fought cops,” were “on the front lines,” and ultimately got “bruised and pepper sprayed.” 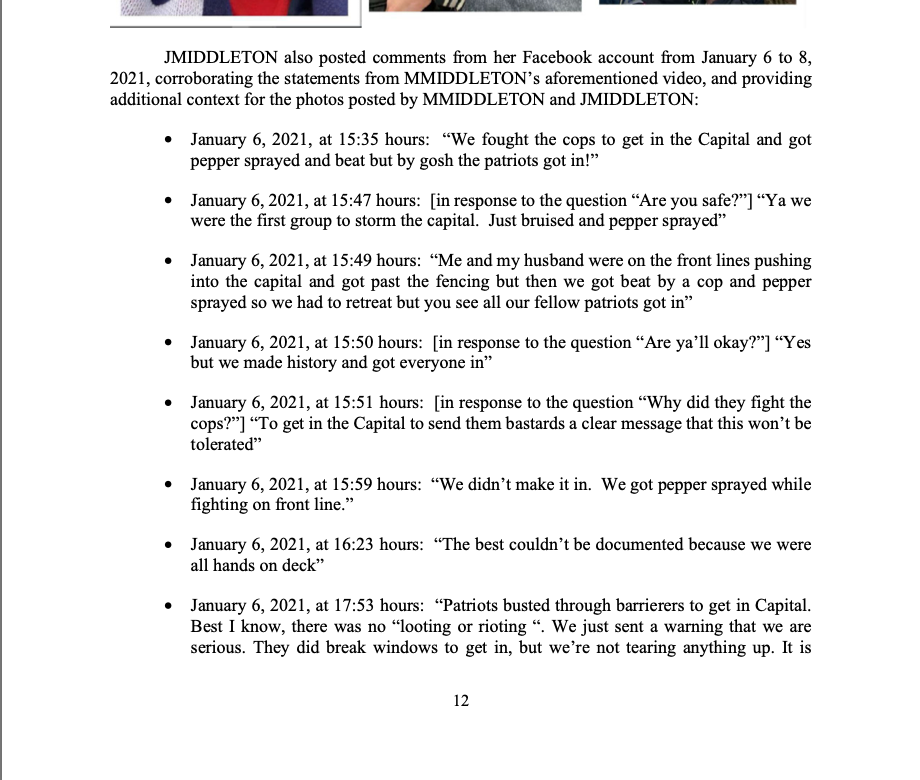 “Patriots busted through barrierers [sic] to get in Capital [sic]. Best I know there was no ‘looting or rioting,'” Jalise Middleton allegedly said on the evening of Jan. 6. “We just sent a warning that we are serious.”

“Patriots don’t stoop low like Antifa,” she went on. The fixation on Antifa continued on Jan. 7: “Patriots surged, just to show strength, Antifa went in to make ya look bad.” 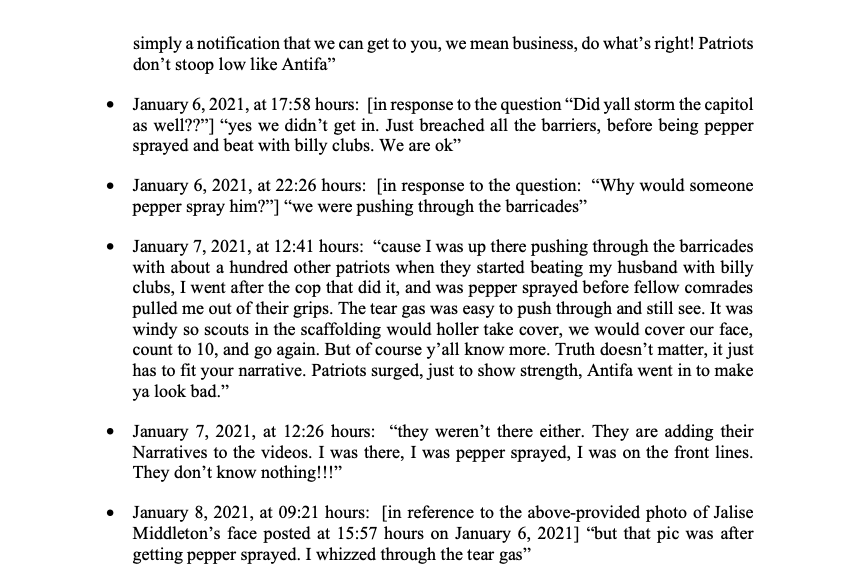