Man Who Scaled Capitol Wall on Jan. 6 and Posted ‘I Got Kicked Out But I’ll Be Back!’ Is Sentenced to Probation 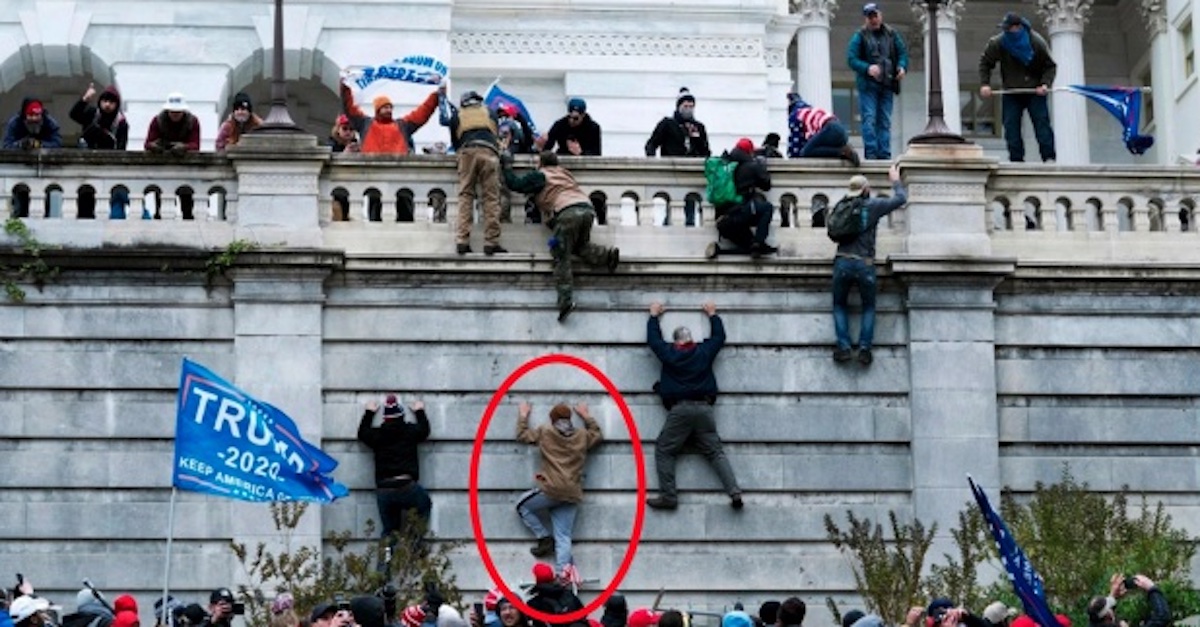 Jordan Stotts is seen scaling a wall in an attempt to get into the U.S. Capitol building on Jan. 6, 2021 (image via U.S. Department of Justice)

A Minnesota man who scaled a wall to get into the Capitol and threatened to return after being kicked out of the building on Jan. 6 has been sentenced to 60 days of home confinement and two years of probation.

Jordan Stotts, 32, pleaded guilty in July to a misdemeanor count of parading, demonstrating, or picketing in a Capitol Building. He had also been charged with entering and remaining in a restricted building or grounds, disorderly and disruptive conduct in a restricted building or grounds, and disorderly conduct in a Capitol building.

Stotts drove to Washington from Minnesota and joined the hundreds of Donald Trump supporters who descended on the Capitol on Jan. 6 in an attempt to stop the Electoral College from certifying Joe Biden‘s win in the 2020 presidential election.

After scaling a wall and climbing on to a balcony at the Capitol, Stotts made his way inside the building. He is seen on surveillance video using his cell phone to record videos and take pictures, and raising his fist in support of the pro-Trump crowd. 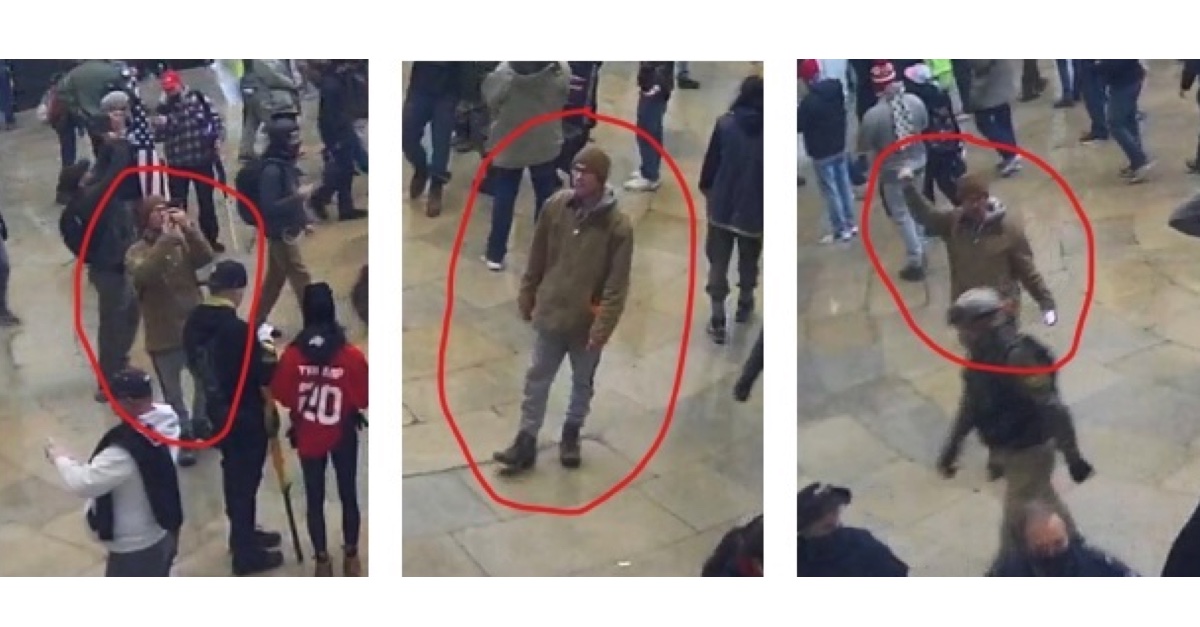 At one point, Stotts made his way to the front of a crowd confronting police officers trying to protect the building. Body-worn camera footage shows Stotts shouting at the officers. 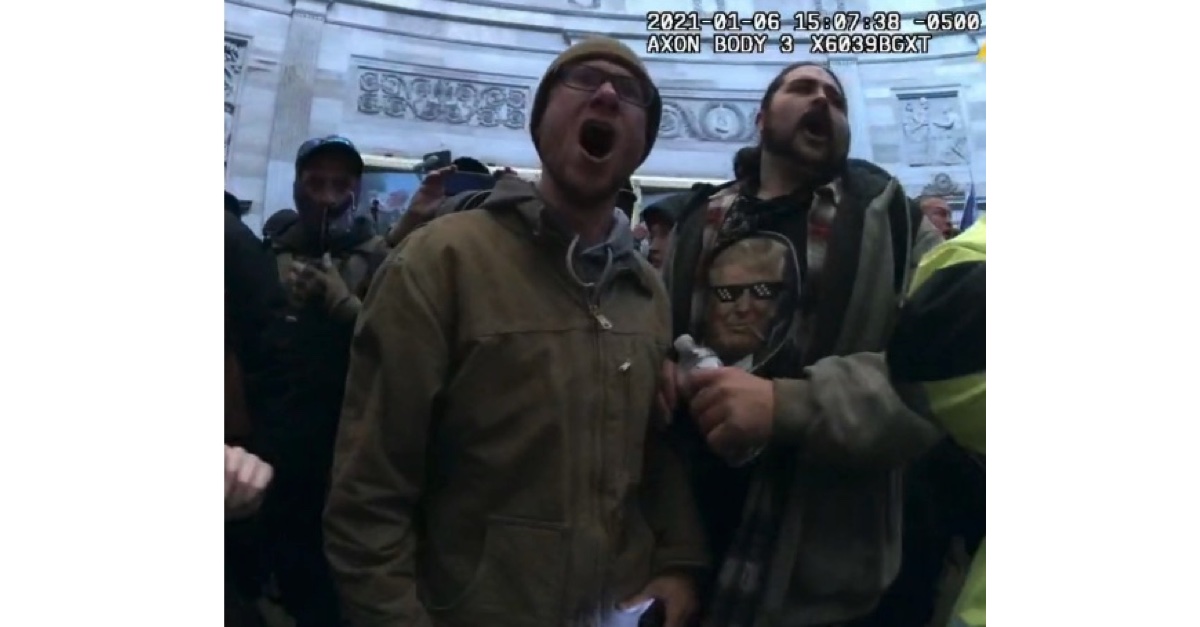 “O say, does that star-spangled banner yet waive!” Stotts yelled at the officers, quoting the national anthem. “O’er the land of the free and the home of the brave!”

Stotts can also be heard shouting at the officers: “We’re here to take back our country for ya’ll! All of us! All Americans! We’re on the same team! Same team!”

Stotts admitted that he spent around one hour inside the Capitol building. His social media posts after the breach indicate that he was proud to have been a part of the mob that day.

“They attack our religious freedom, freedom of speech, and our freedom to do as we please!” Stotts posted on Facebook. “They work for us and have no right telling us what we can and can’t do! I’m sick of it and so are the Patriots! With God on our side we will prevail!”

A second post stated that the siege was “far from over!” In a third post, he pledged to come back after being kicked out of the building. 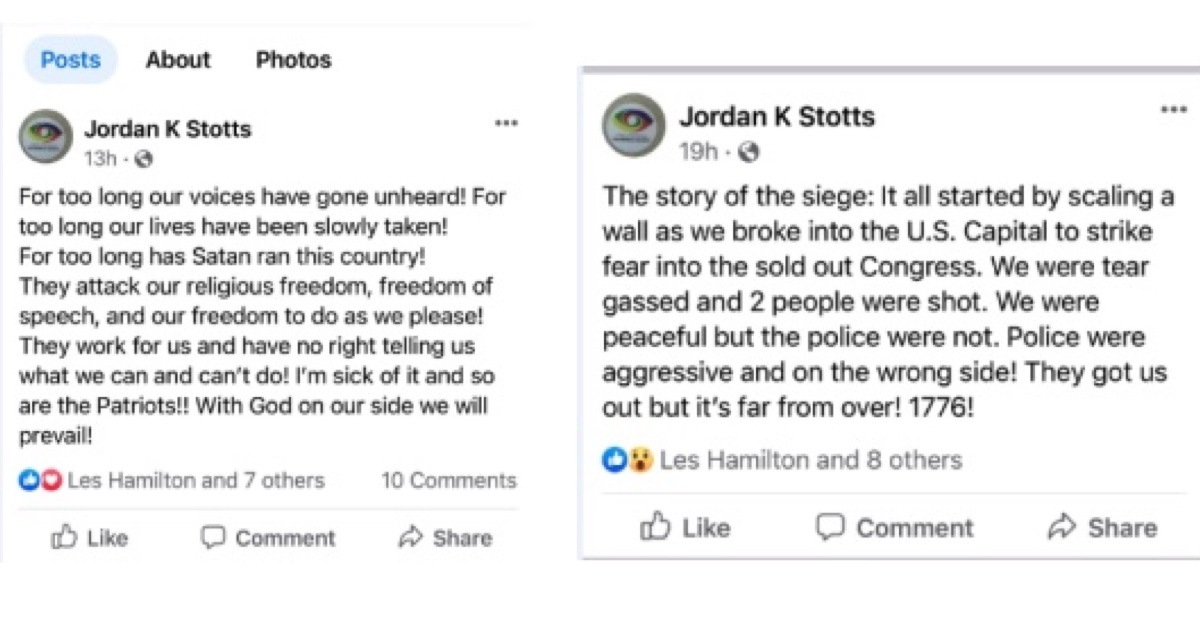 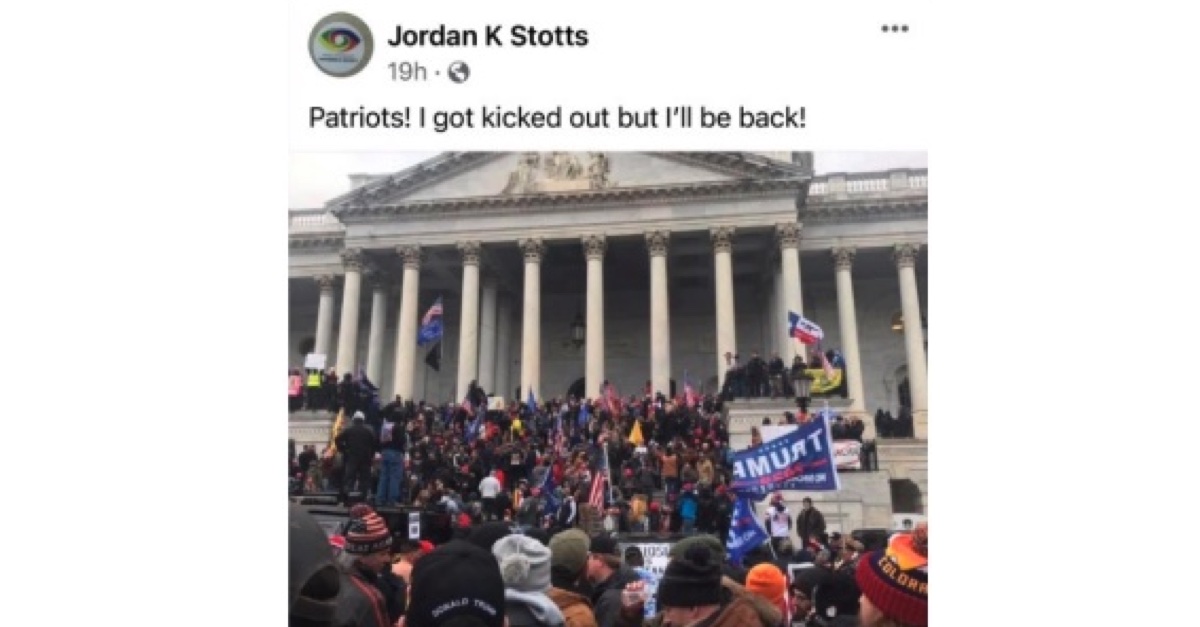 U.S. District Judge Timothy Kelly, a Trump appointee, rejected the government’s request to sentence Stotts to 45 days in jail, plus a $500 fine. In the sentencing memorandum, prosecutors said that Stotts’ actions before, during, and after the events of Jan. 6 warrant incarceration:

Stotts drove over 2,000 miles across the country, without assistance, to participate in the January 6 riot at the Capitol. Once there, he scaled a wall to gain entry while a mob cheered for him. Although Stotts implausibly claimed that he did not see any police officers outside of the Capitol Building before entering, he admittedly saw them inside the building and cheered on the crowd as they stormed past the officers trying to block the Rotunda doors. Despite seeing this, Stotts chose not to exit the building. Rather, he went back into the Rotunda. Most troubling, when Metropolitan Police Department officers entered the Rotunda wearing riot gear and carrying batons, Stotts ignored their commands to exit. Instead, he confronted the officers, shouted in their faces, and stood his ground in the face of their orders to leave the Rotunda. Although that conduct did not result in physical harm to the officers, it certainly created the risk of an escalation of the confrontation that could have resulted in violence.

Stotts’ statements on Facebook shortly after breaching the Capitol Building show a total lack of remorse for his unlawful conduct. He proclaimed he was “sick of” those who were working to uphold the result of the 2020 Presidential election and that his “side [would] prevail.” He referred to the riot as “the siege,” and admitted entering into the Capitol “to strike fear into the sold out Congress.” Stotts also claimed the “[p]olice were aggressive and on the wrong side!” and announced, “They got us out but it’s far from over!” These statements raise concerns that Stotts may intend to incite violence against “the wrong side” in the future.

The government also pointed to Stotts’ criminal history as a reason for why he should be jailed. Stotts has previously been convicted of disorderly conduct and obstruction for an incident in 2012 when Stotts became belligerent with police officers who were issuing citations for underage alcohol consumption.

“Stotts’ not insubstantial but dated criminal history militates at least somewhat in favor of a custodial sentence,” the government’s sentencing memorandum said. “His prior probation violation demonstrates his inability to comply with the terms of a probationary sentence, and his prior short jail sentences show he has not been deterred from future criminal conduct.”

Stotts’ defense memorandum painted a different picture, saying that Stotts was essentially a tourist in Washington who got “caught up in the moment” and made a bad decision:

He arrived in the D.C. area on January 4. He came into the city to do some sightseeing, then stayed in a campsite in Virginia. He returned on January 5 for the rally at Freedom Plaza and then again on January 6 for the speeches. Then, he made a decision he greatly regrets – he got caught up in the moment and followed a crowd of strangers up to and into the Capitol. He recognizes that the vision of him scaling the wall is bad, but at the time, it simply seemed like a challenge. Again, as he has said himself, it was a terrible lapse in judgment and one he deeply regrets. Most importantly, given the chance to do it again, he certainly would not.

Stotts’ memo also says he is unable to pay restitution due to the seasonal nature of his work.

Described by prosecutors as having a “not insubstantial” criminal history, Stotts has convictions in roughly half a dozen mostly traffic-related cases, Minnesota records show. His lawyer said that his client’s prior actions were the result of an alcohol problem for which he has received treatment. Stotts now “leads a very simple and solitary life,” the memo says.

Read the government’s sentencing memo, which contains detailed information about Stotts’ actions on Jan. 6, below.