Man Arrested After Capitol Siege Said Rioters Were ‘Patriots Who Were Trying to Restore the Republic,’ Not ‘Antifa Provocateurs’ 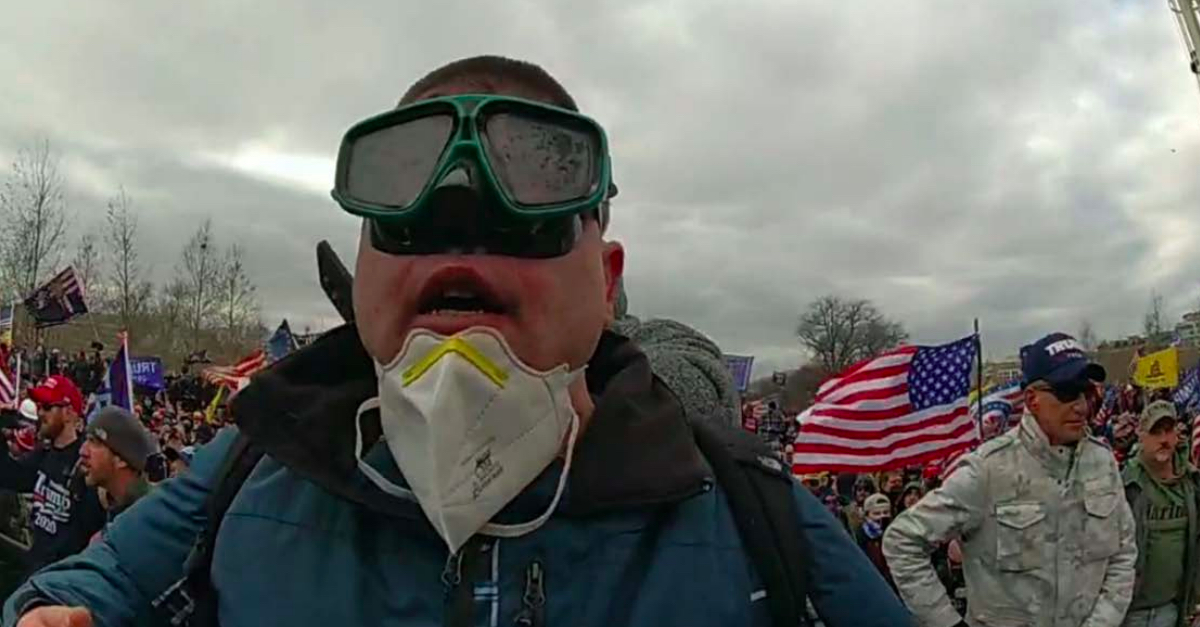 A Capitol rioter accused of attacking uniformed officers and helping several others use a giant “TRUMP” sign as a battering ram on Jan. 6 was arrested after confirming his actions on Facebook and in an online chatroom for fans of Donald Trump.

Several witnesses contacted federal authorities identifying Jose Padilla as one of the rioters depicted in video footage from Jan. 6 posted to social media. According to one of the witnesses, an individual who was still in contact with Padilla described him as being “immersed in the alt-right” and having a “Q-Anon mentality.”

According to the criminal complaint filed in Washington, D.C. federal court, a scuba mask-wearing Padilla was captured on video physically breaking through a metal barricade while with multiple police officers standing on the other side. He can be heard yelling “Push! Push! Fucking push!”

After being pushed back by police officers who deliver several baton strikes, Padilla joined multiple other rioters who picked up a large “TRUMP” sign with a metal frame and carried it back to the police barricade. The group then used the sign “as a battering ram against the [Metropolitan Police Department] officers attempting to hold the line.”

Later in the day, Padilla joined other rioters who were attacking uniformed police officers inside the archway of the U.S. Capitol Lower West Terrace doors. He had a large flag and flagpole with him.

“PADILLA is seen at the bottom of these pictures with a flagpole. He throws the flagpole at the officers who are simultaneously being attacked by rioters,” said the complaint, which included several images of Padilla and the flagpole.

The day after the insurrection, Padilla posted about his actions on Facebook, confirming that the rioters were supporters of Donald Trump, not members of Antifa.

“There’s a lot of memes and posts flying around saying that the people who were fighting last night were all Antifa provocateurs etc,” he wrote. “I just want to say that as a first hand observer of every point of last night, that it was not Antifa. They were Patriots who were trying to Restore the Republic after being attacked by the cops, who struck first. Even those who broke the windows next to the doorway to the Capitol were Patriots trying to find a way to turn the Flanks of the cops.”

He also posted a video to his page titled “Just after we stormed the 2nd tier of the Capitol,” which was captioned “Most Beautiful thing I saw in DC on Wednesday.”

In addition to his Facebook posts, Padilla also made several posts on the pro-Trump website thedonald.win where he confirmed that incurred several injuries from his encounters with police officers.

“After I had my right hand knuckles and ring finger crushed for just talking to an officer I knew was a soldier and reminding him of his duty to refuse unlawful orders, I got pissed, and so did many others. That’s when we started pushing,” he wrote.

“I was right there. I have the wounds to prove it. I pushed the rails, I pushed the stairs, and then pushed the doorway. I was beaten unconscious twice, sprayed more times than I care to count, received strikes from batons that should have been lethal (Multiple temple and carotid strikes) except that God was on my side.”

He also said the reason for storming the Capitol was to replace lawmakers with “patriots.”

“If we could have occupied the Capitol, we could have invoked the right given to us in the 2nd paragraph of the Declaration of Independence[]. We would have been in the Seat of Power,” he wrote. “All we would need to do is declare our grievances with the government and dissolve the legislature, and replace it with Patriots who were there. Then simply re-adopt the Constitution with amendments added to secure future Federal elections.”

Padilla was charged with felony counts of obstruction of law enforcement during a civil disorder and assault on a law enforcement officer with a deadly or dangerous weapon.