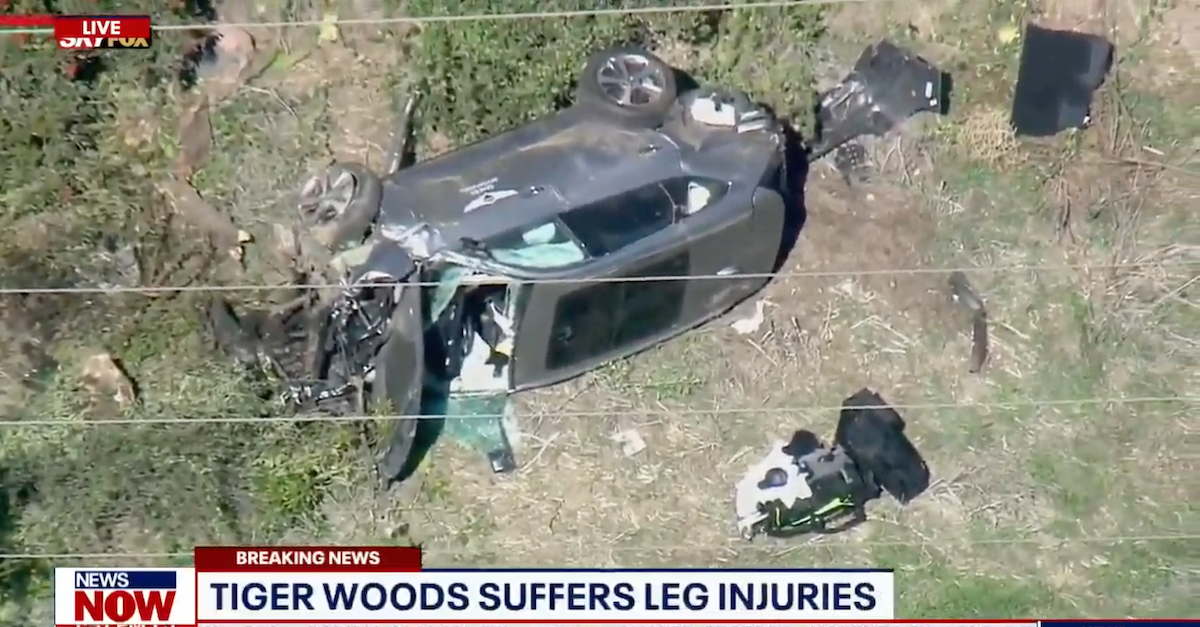 Update: Los Angeles County Sheriff’s Captain James Powers said during a Fox News interview later on Tuesday that the “jaws of life” were not used, which is not what authorities said in their initial statement on the response to the Tiger Woods crash.

“No they weren’t. [The jaws of life] were not used. That was not an accurate statement,” Powers said. Asked why that detail was included in the sheriff’s department statement, Powers said “maybe somebody misunderstood” or assumed extricate meant the jaws of life had been used.

The original story appears below, but the headline has been adjusted accordingly.

This morning @LMTLASD responded to a roll-over collision in which @TigerWoods was injured. Please see our statement… pic.twitter.com/cSWOxKZC1w

“On February 23, 2021, at approximately 7:12 a.m., LASD responded to a single vehicle roll-over traffic collision on the border of Rolling Hills Estates and Rancho Palos Verdes. The vehicle was traveling northbound on Hawthorne Boulevard, at Blackhorse Road, when it crashed. The vehicle sustained major damage,” authorities said. The driver and sole occupant was identified as PGA golfer, Eldrick ‘Tiger’ Woods.”

“Mr. Woods was extricated from the wreck with the ‘jaws of life,'” the statement continued.

An aerial view showed the carnage at the scene.

Woods, a 45-year-old father of two, was reportedly taken to Harbor-UCLA Medical Center with “moderate to critical” injuries.

“Tiger Woods was in a single-car accident this morning in California where he suffered multiple leg injuries. He is currently in surgery and we thank you for your privacy and support,” Woods’ agent Mark Steinberg said in a statement.

The cause of the crash, which is said to have occurred around 7 a.m. PST, is not yet clear.

Just days ago, Woods sat down for an interview with CBS’ Jim Nantz to discuss his recovery from his fifth back surgery.

Tiger Woods joined Jim Nantz in the booth and spoke about his recovery from back surgery. pic.twitter.com/3TyTHgRFPA

“I’m feeling fine, a little bit stiff,” Woods said. Woods, who has also had several knee surgeries, had hoped that he would be healthy enough to compete in the 2021 Masters Tournament in April.

As we await more details and hope for Woods’ swift recovery, Tiger’s fans fear that this crash may mark the end of his all-time great golf career, filled with 15 major championships.

The most memorable of those championships came at the Masters in 2019, roughly two years after Woods was arrested in Florida for DUI and entered rehab for addiction to prescription painkillers.

Tiger Woods winning the Masters at Augusta in April 2019 – one of the all-time great sporting momentspic.twitter.com/xMMmVX80O4

PGA Tour Commissioner Jay Monahan said in statement that the organization has been “made aware of Tiger Woods’ car accident” and is “awaiting further information when he comes out of surgery.”

“On behalf of the PGA TOUR and our players, Tiger is in our prayers and will have our full support as he recovers,” Monahan said.