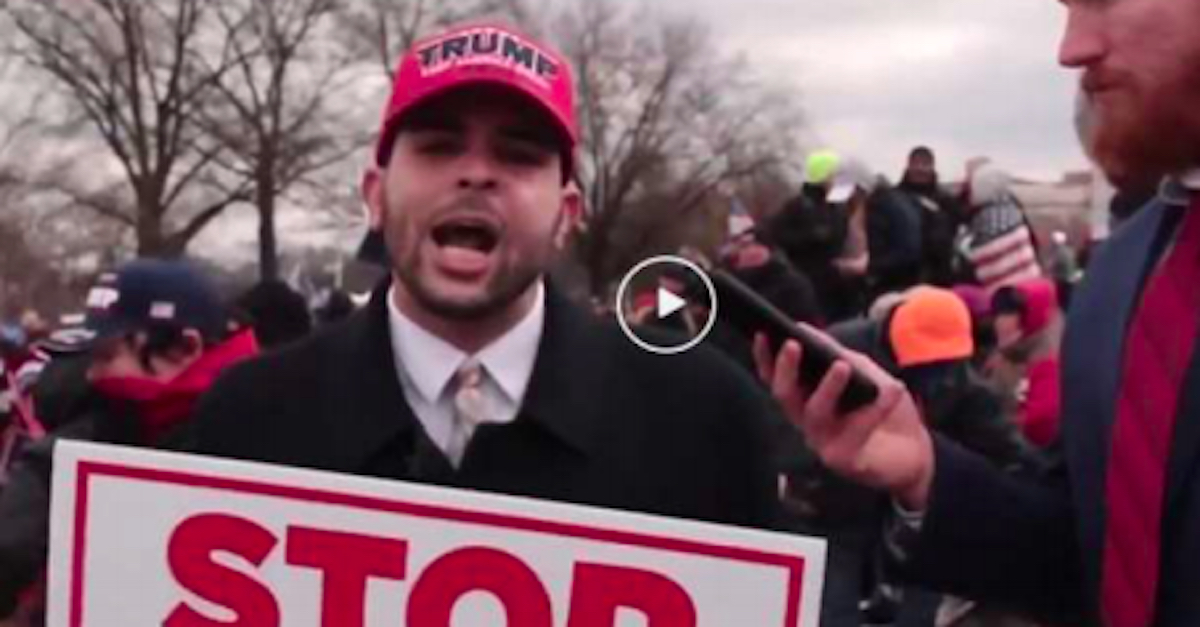 According to the criminal complaint unsealed Friday in the U.S. District Court in Washington, D.C., 26-year-old Edward Francisco Rodriguez of Brooklyn was among a group of rioters on the lower-level terrace of the west side of the U.S. Capitol that confronted a barricade of police officers trying to prevent group from getting to the Capitol building.

As depicted in publicly available video, a man wearing a dark colored suit and tie and red and black “Trump” hat—whom authorities believe to be Rodriguez—made his way to the front of the crowd and then sprayed officers with a chemical irritant.

Authorities were able to identify Rodriguez after a tipster notified the FBI about a video on the sub-Reddit “r/CapitolConsequences.” The first half of the video showed the then-unknown individual in the suit referred to only as #SUITMACER wearing a face mask and spraying police with a chemical irritant before retreating into the crowd using a “Stop the Steal” sign as a shield. The crowd erupts in cheer after the irritant is sprayed. But the second half of the video, filmed earlier in the day on Jan. 6, allegedly depicts Rodriguez giving an interview to an unidentified independent media outlet while wearing the same distinctive outfit, this time without the face mask.

During the interview, the man believed to be Rodriguez is holding a “Stop the Steal” sign as he appears to yell: “Here in America, we fight back.”

“We will never surrender to dictatorship, corruption, communism, or socialism,” the man says. “We the people will never put up with their bullshit. Here in America, we fight.”

A second interview with the #SUITMACER that allegedly took place in the middle of the siege showed him saying “words to the effect that he was very happy to be there” and stating, “We made it all the way through,” according to the FBI’s affidavit.

A separate tipster notified the FBI that the person widely referred to as #SUITMACER was Rodriguez and provided the bureau with “a driver’s license photo, police mug shots, and a screen shot from Rodriguez’s Century 21 Real Estate Profile” that all appeared to match with depictions of the man who sprayed police with the chemical irritant.

Federal agents then showed the #SUITMACER interview videos to a former co-worker of Rodriguez who positively identified him in both clips.

Rodriguez is facing a slew of federal charges, including assaulting, resisting, or impeding police; engaging in physical violence on Capitol grounds; disorderly conduct; and entering a restricted building.

His case is being prosecuted by the U.S. Attorney’s Office for the District of Columbia as well as the Department of Justice National Security Division’s Counterterrorism Section.

In the last six months, more than 535 people have been arrested for crimes related to the siege on the U.S. Capitol, with more than 165 people being charged with assaulting or impeding police, the DOJ said in a press release about Rodriguez’s arrest.