Jeffrey Sabol Claims He Was Rioting and Protecting Law Enforcement

Geophysicist, Accused of Dragging D.C. Cop and Pinning Him Down with a Baton, Claims He Was Just ‘Patting Him on the Back’ 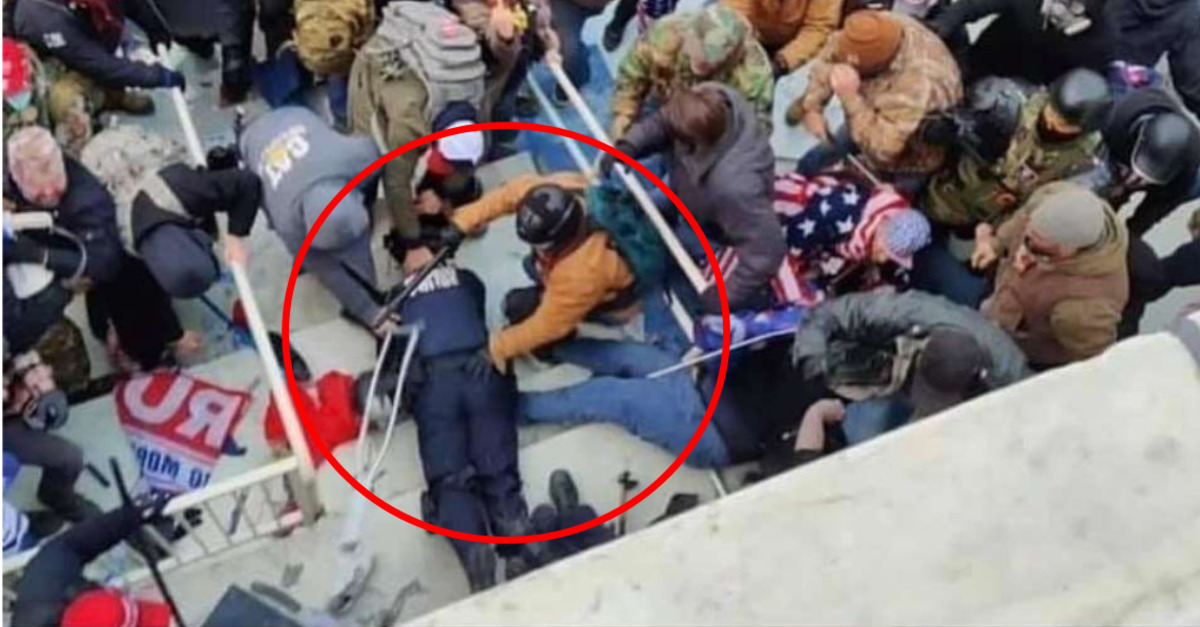 A divorced geophysicist allegedly caught on video dragging a police officer down the stairs of the U.S. Capitol Building says he was actually just expressing his respect for law enforcement, according to court papers unsealed on Wednesday.

Law&Crime previously reported on 51-year-old Jeffrey Sabol’s failed attempt to elude law enforcement by fleeing to Switzerland–after a failed attempt to take his own life. He was arrested late last week in a hospital just north of New York City following those efforts. Sabol is currently being held without bail.

Charged with one count of 18 U.S.C. §231(a)(3), attempting to interfere with law enforcement during a civil disorder, he faces five years in prison if convicted as charged.

The statement of facts by FBI Special Agent Michael J. Deutsch relies largely on video evidence and brings the government’s case against the geophysicist into sharper focus.

A Washington D.C. Metropolitan Police Department (MPD) Officer identified only by their initials as B.M. leads the narrative.

“Between 4:00PM and 5:00PM [on Jan. 6], B.M. walked through an interior tunnel of the U.S. Capitol building and assumed a post in an archway which provided access to the building’s exterior,” the filling notes. “From this archway, alongside other uniformed law enforcement officers, B.M. observed hundreds of individuals gathered outside. Some of these individuals were throwing and swinging various objects at the group of law enforcement officers.”

That’s where the government says Sabol came in.

Initially described as an individual who can be identified in “numerous videos” wearing a “tan colored jacket, black helmet, green backpack and black gloves” near the officer, Sabol allegedly had “an instrument believed to be a police officer’s baton across the police officer’s lower neck” with his left hand providing “back side” pressure to keep B.M. in line, according to the government.

“In the referenced video, the same individual that appears in the still photograph, can be seen running up the stairs of the United States Capitol and attempting to grab the leg of a presumed police officer,” the document alleges. “The presumed officer seems to kick the individual away from him causing the individual to fall backwards down the stairs.”

After that, Sabol allegedly got up and gave it another go.

The respected academic, it turns out, admitted his participation in most of the events as described by the government–but he claims they’ve got it all wrong on the interpretation front.

Sabol first confirmed his own identification to law enforcement after being show two separate videos of the Capitol attack–based on the government’s suppositions about his outfit on the day in question. He then acknowledged that he did, in fact, run up the stairs near the archway and jumped over a barricade. And then the stories diverge.

During an interview on January 13, Sabol “acknowledged that the video seemed to depict him throwing punches at the police officer, but he claims he was ‘patting him on the back’ and saying ‘we got you man,'” the statement of facts notes. Sabol went on to insist that he “covered the police officer for his own safety” in order to protect him from other rioters who were hitting B.M. with poles.

The filing continues with Sabol’s version of the incident–and an admission that his own version might not be the most reliable:

SABOL retreated from that location and ended up on the left side of the stairway with a crowd of people. SABOL told law enforcement that, approximately fifteen minutes later, a “call to battle was announced” and SABOL “answered the call because he was a patriot warrior”. This time, SABOL took a police officer’s baton out of the officer’s hand and used it to “protect the officer” who was on the ground.

SABOL was shown the above-referenced still photo of a police officer lying face down on the ground with SABOL over him. SABOL acknowledged that he is the individual in the picture. SABOL acknowledged that this picture looked bad and he could not recall if he hit the police officer with the baton because he was in a fit of rage and the details are cloudy.

The government also alleges that, when first picked up by Clarkstown Police Officers on January 11, days after the unsuccessful insurrection, Sabol was still “found covered in blood” and “suffering from severe lacerations to both thighs and arms.”

Initially aided by officers, the physicist allegedly made several key admissions that will likely find their way to a jury’s ears.

“I am tired, I am done fighting,” Sabol said allegedly unprompted. “My wounds are self-inflicted [from] fighting tyranny in the DC Capital,” and “I am wanted by the FBI.”