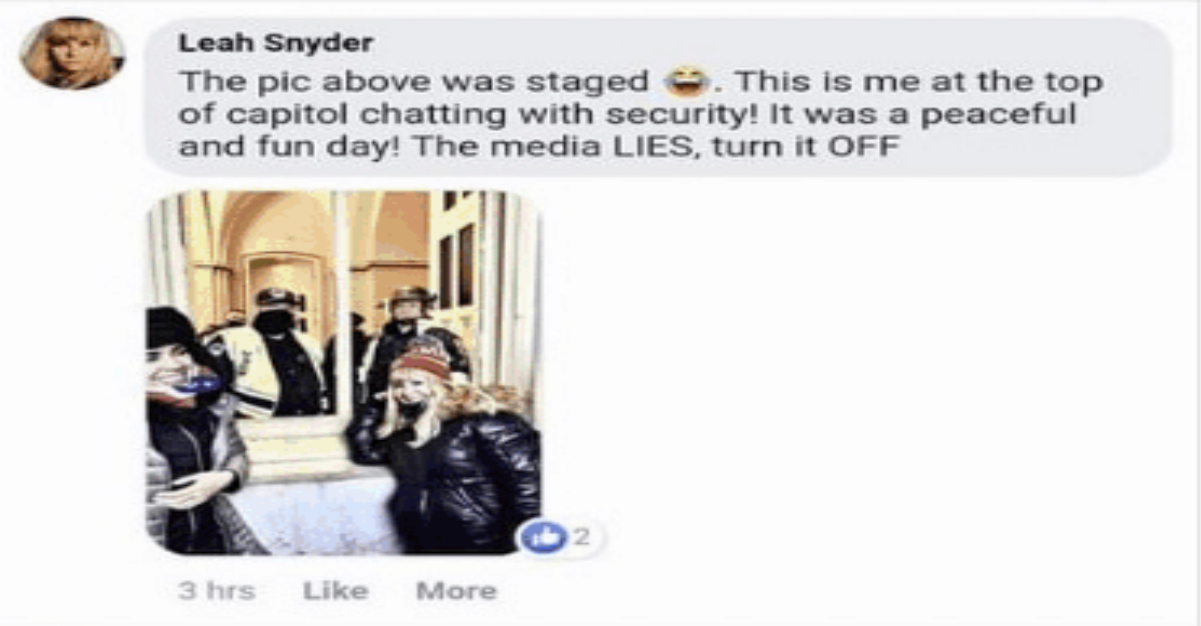 A California woman who was fired after posting about her so-called uplifting experience at the U.S. Capitol on Jan. 6 filed a wrongful termination and retaliation lawsuit claiming that she merely participated in a peaceful protest while her employer had simply bought into a “cancel culture” narrative.

Leah Snyder, a computer programmer and coder at Alight Solutions, was terminated after she posted two selfies of herself at the Capitol, claiming it “was a peaceful and fun day,” and telling others the media was lying about what transpired.

Another social media user pointed out the fact that people had died during the riots, saying that was a pretty clear indicator of who was actually lying about happened.

“Yes. The media,” Snyder answered. “If people got in it’s because they let them in. I think the woman shot was a huge mistake. I talked to the guards. They said they were told to stand down until they got an order and were super nice. They said they would let us know if they did. They never did the whole time. We were told to go home around 5 and everyone did. So nope. Not a liar. The media is. Turn it off for the love of god.”

Snyder’s filed complaint said she had nothing to do with the insurrection at the Capitol—which resulted in at least five deaths (including one police officer), and dozens of arrests. Snyder, like others who were fired after self-reporting their presence at the Capitol on Jan. 6, said she was only peacefully protesting that day.

“She did not see nor participate in any rioting. She did not enter the Capitol. She did not observe or hear of any injuries to persons or damages to property,” the complaint stated. “The day after she returned home, Plaintiff, who felt uplifted by virtue of her participation in a peaceful protest and based on the speeches she heard delivered by the President and others, sought to explain her participation to those who had not attended what she reasonably perceived was a peaceful protest of election vote counting procedures.”

After learning that someone had posted her comments and tagged Alight’s Facebook page, Snyder on Jan. 8 reported the “cyberbullying” and “harassment’ to the company’s human resources department, despite the fact that the alleged harasser was not affiliated with the company. She was fired two days later for “participation in a riot,” and Alight reported Snyder to law enforcement authorities.

“Apparently, Defendant adopted a version of the events in Washington, D.C., which had been advanced by a particular cancel culture media outlet,” the complaint stated without identifying the outlet. “Defendant was willing to employ persons of different races, creeds, colors, genders, and sexual preferences, so long as they conformed their ideas and expression of their ideas to a narrowly focused, but unwritten agenda, established by Defendant. Plaintiff received no protection by Defendant from the cyberbullies.”

She alleged that her termination violated her civil rights under California’s Bane Act, which prohibits anyone from interfering with a person’s federal or state statutory rights through the use of violence, threats of violence, intimidation, or coercion. Additionally, Bane Act claims require showing that the claimant “reasonably fears” that “violence will be committed against them or their property.” The statute clearly does not apply to Snyder’s claims, none of which involve her employer levying anything remotely akin to a threat.

She asked the court to award her $10 million for economic and punitive damages and direct Alight to reinstate her employment with the company.