Feds Say Trump Supporter Who Dressed ‘Like Antifa’ on Jan. 6 So He Could ‘Get Away with Anything’ Is Now In Jail 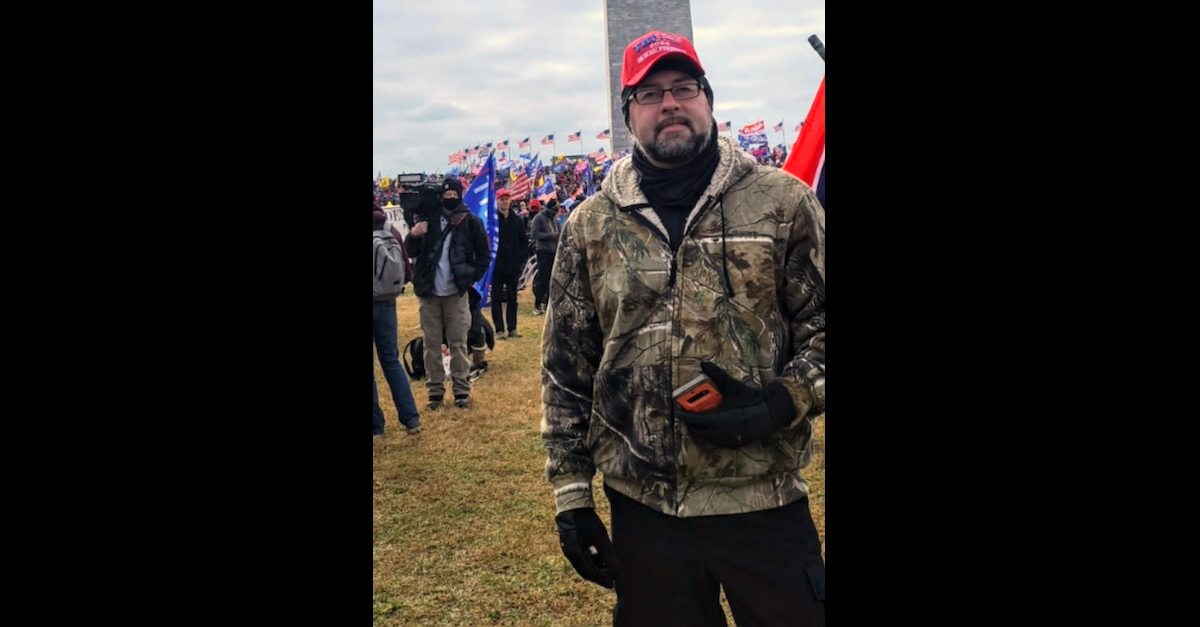 A South Carolina man faces federal charges after admitting to federal agents that he traveled to Washington, D.C., with his wife on Jan. 6th, attended then-president Donald Trump’s rally, and entered the U.S. Capitol rotunda. Text messages the man shared with relatives indicate he bragged that he had dressed “like ANTIFA.”

According court papers on file in the District of Columbia, federal agents caught up with William Robert Norwood III, 37, after his relatives failed to share in his exploits and ratted him out.

Ten days after the deadly events at the Capitol, a relative referred to only as “J.D.” told the FBI that another relative, “T.D.,” had a brother (Norwood) who “claimed to have assaulted federal officers.” on Jan. 6th.

FBI agents met J.D. to get more of the story. J.D. said that he or she was at dinner with T.D. when he or she learned the information.

The next day, agents met with T.D.; T.D. gave them Norwood’s phone number and copies of text messages from Norwood which prosecutors cited in court papers.

“I’m dressing in all black. I’ll look just like ANTIFA,” Norwood is alleged to have texted a small group on Jan. 5th, one day before the Capitol siege. “I’ll get away with anything,” he then added.

“It worked,” he said on Jan. 7th. “I got away with things that others were shot or arrested for.”

“I tested a theory. I was right. I saw ANTIFA being bussed in and escorted by the police,” he dubiously claimed. “Trump has announced he [w]ill leave in a peaceful way on Jan. 20th. It[‘]s not right on so many levels[] that this fraudulent election could not be investigated to the fullest.”

Federal authorities have said there’s been no evidence to date that Antifa was involved in the evens of Jan. 6.

“The cop shot a female Trump supporter[], [t]hen allowed ‘ANTIFA Trump Supporters’ to assault him. I was one of them,” Norwood texted the group on Jan. 7th in an apparent reference to the killing of Ashli Babbitt. “I was there. I took his shit.”

Immediately following that message is an image prosecutors believe shows Norwood wearing a police vest under his own coat.

“He deserved worse,” Norwood is alleged to have continued. “His life was not threatened.”

“I fought 4 cops[;] they did nothing,” Norwood then said. “When I put my red hat on, they pepper balled me.”

“No[,] not wild[;] we can sniff BS when we see it,” someone named Angela added to the thread.

“They were ordered to allow Antifa to get away with anything,” Norwood then claimed.

“I got a nice helmet and body armor off a cop for God’s sake and I disarmed him,” Norwood went on to muse. “Tell me how that works.”

T.D., who shared the messages with the FBI, then jumped in again.

“Robbie [the defendant] literally bragged about pretending to be this mysterious Antifa y[‘]all go on and on about, and then you say no REAL [A]ntifa did this,” T.D. said.

Some of his reply text is cut off in the available photos.

“He thought I was ANTIFA,” Norwood said with apparent reference to an officer.

“Listen to yourselves,” T.D. said.

Norwood then shared a screen shot of a message which purported that Antifa operatives were going from Portland to D.C. and were planning “to wear camouflage, cut-offs, and Trump paraphernalia to blend in, but turning their MAGA hats backward for identification.”

“You admitted to going and being something you’re accusing other people of being,” T.D. said. “And then got mad and blamed others for the same thing you did. What the actual fuck is wrong with you?”

“I saved several cops from being killed by Antifa,” Norwood said. “I defended them after they assaulted me. They were scared for there [sic] lives.”

T.D. then issued a few lines to mock Norwood.

“The one cop who deserved it, got it,” Norwood replied.

“I’m anti shitty cop,” Norwood said, per the texts referenced in federal court documents. “The cops who acted shitty got exactly what they deserved. The ones who were cool, got help.” 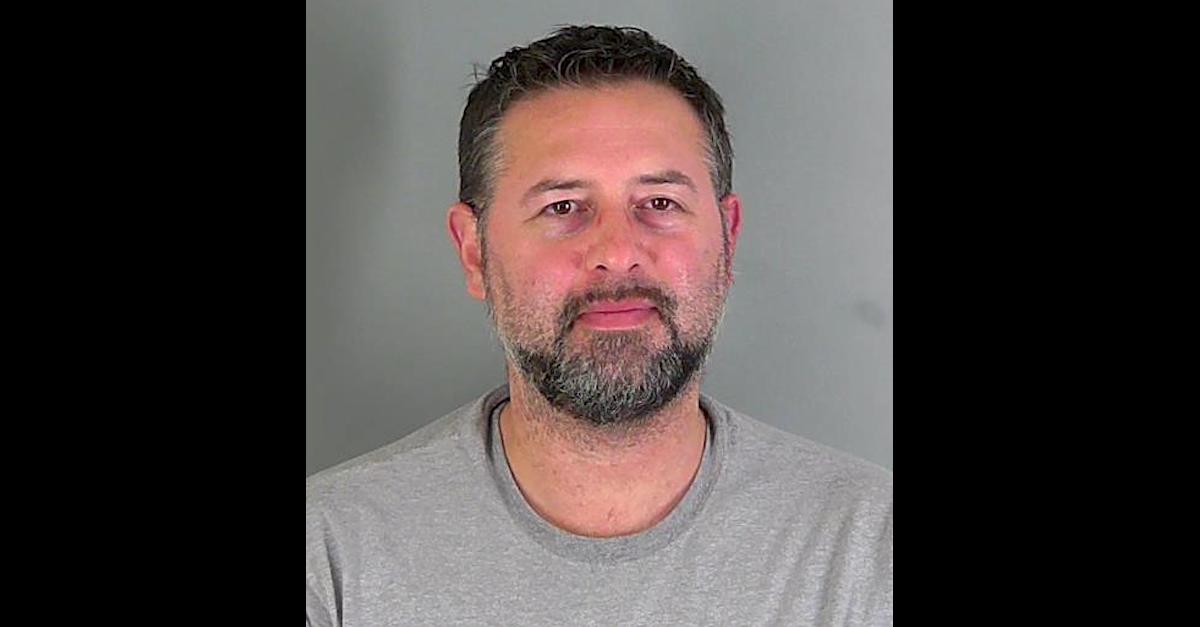 Norwood decided to speak to the FBI on Jan. 22. In what agents describe as a noncustodial interview, Norwood admitted traveling to D.C. with his wife to attend Trump’s rally, then admitted going to the U.S. Capitol. There, he became separated from his wife in the crowd.

“[H]e was close enough to law enforcement to be sprayed in the face with a chemical irritant,” charging documents say.

Despite that, Norwood “then admitted to entering the U.S. Capitol, including, at one point, the Capitol Rotunda.”

The defendant then claimed a Capitol Police officer told him, “I’m in your side.”

Norwood said the crowd prevented him from leaving. He also “claimed to have helped protect multiple officers from being assaulted, including by forming a human chain to protect certain officers.”

He then claimed he left the capitol building and that an “unknown person took a police vest from a pile of police equipment that was lying on the ground outside the west side of the Capitol building and put it on” him. He said he took a helmet from the pile, put it on, and reunited with his wife.

“N[orwood]’s description of how he acquired the vest and helmet is consistent with U.S. Capitol Police officers’ accounts of how their equipment was stolen by rioters on January 6, 2021,” the FBI agent said.

Norwood told the FBI that he stayed with “an older couple from Ohio, who invited them to stay in their hotel room at the Hampton Inn for the night.”

He could provide no further details about the hotel room, but he claimed he ditched the police gear inside when he split town.

Norwood also denied to the feds that he had assaulted any law enforcement officers. Rather, he said his statements in the aforementioned text messages were merely uttered so he would “sound tough.”

“N[orwood] repeatedly claimed that he only attempted to help law enforcement, not hurt them,” the charging documents say.

Norwood turned photos of himself at the Jan. 6 events over to the FBI.

Agents also recovered surveillance video which purports to show him inside the Capitol complex.

Norwood is charged with (1) knowingly entering or remaining in any restricted building or grounds without lawful authority; (2) violent entry and disorderly conduct on Capitol grounds; (3) obstruction of justice/Congress; and (4) theft of government property.