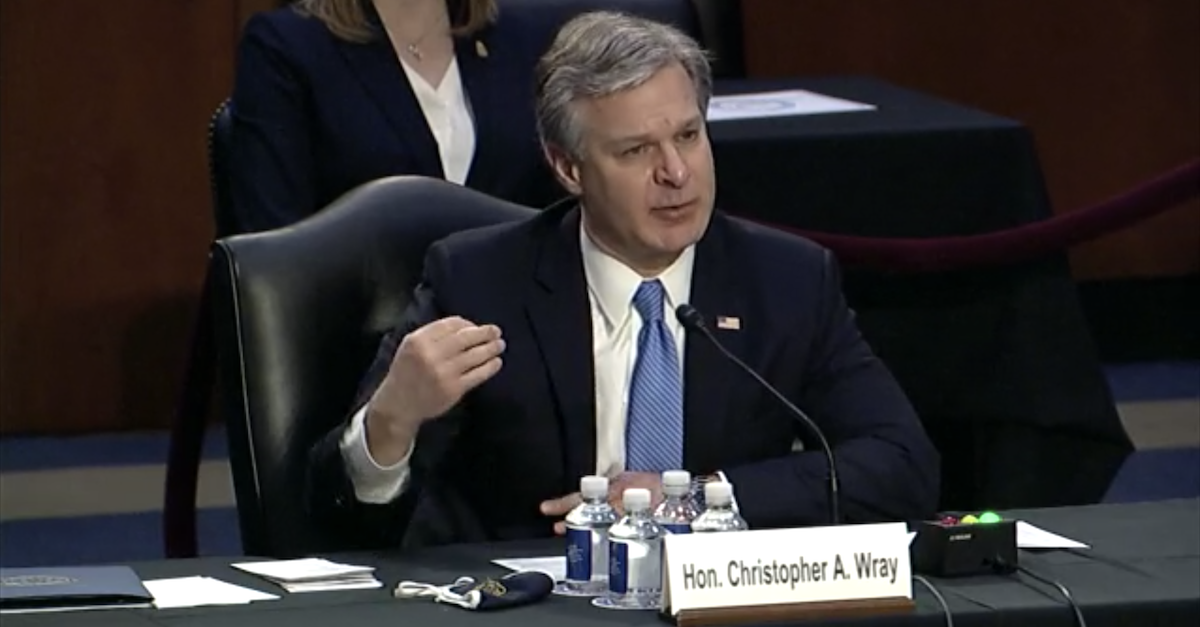 Demolishing a myth circulating on the political right following the U.S. Capitol insurrection, FBI Director Christopher Wray told the Senate on Tuesday morning that two months of investigation has uncovered no signs that rioters falsely posing as former President Donald Trump’s supporters were behind the violence.

“We have not seen evidence of that at this stage, sir,” Wray replied.

Durbin appears to have anticipated that answer, based on his opening remarks likening the Capitol rioters to the Ku Klux Klan.

“The insurrectionists who stormed the Capitol on January 6 did not wear white robes and hoods,” Durbin said in his prepared remarks. “They might as well have. They are the latest incarnation of a violent white supremacist movement that has terrorized fellow Americans on the basis of their race, religion, and national origin for more than 150 years.”

Pressed by Sen. Patrick Leahy (D-Vt.), Wray added that he also found no evidence of involvement by antifa, an amorphous collective of left-wing and anti-fascist movements vilified by Trump and conservatives.

On the classification of the Capitol riot, Wray was unequivocal.

“We view the events of January 6 as domestic terrorism,” the director testified.

Wray’s testimony comports with that of his law enforcement partners at the U.S. Capitol police, D.C. Metropolitan Police, and the sergeants-at-arms for both branches of Congress, who uniformly told the Senate Homeland Security Committee last month that the violence at the Capitol was coordinated, included white supremacists and could have been much worse.

During the recent confirmation hearings for attorney general nominee Merrick Garland, the Judiciary Committee heard the judge hearken back to the origins of the Justice Department in combating the KKK.

“The first Attorney General appointed by President Grant to head the new Department led it in a concerted battle to protect black voting rights from the violence of white supremacists, successfully prosecuting hundreds of cases against members of the Ku Klux Klan,” Garland noted on Feb. 22.

On the morning of the hearing, George Washington University’s Program on Extremism released a report titled “This is Our House!” analyzing the 257 accused participants in the siege. Of that number, researchers traced 33 to militant networks and 82 to organized clusters, describing the remaining 142 as “inspired believers.”

“These individuals, according to available evidence, were neither participants in an established violent extremist group nor connected to any of the other individuals who are alleged to have stormed the Capitol,” the report states. “They arranged their own travel, accommodations, and other logistics to join the crowds in Washington from areas throughout the United States.”

Sen. John Cornyn (R-Texas) brought up the report in questioning Wray about whether these networks defy easy narratives, a point on which Wray agreed.

When he testified in September, Wray testified that racially motivated violent extremism made up the bulk of the FBI’s domestic terrorism cases. The director reiterated that point during Tuesday’s hearing, calling white supremacy a “persistent evolving threat.”

The hearing was titled “Oversight of the Federal Bureau of Investigation: the January 6 Insurrection, Domestic Terrorism, and Other Threats.”