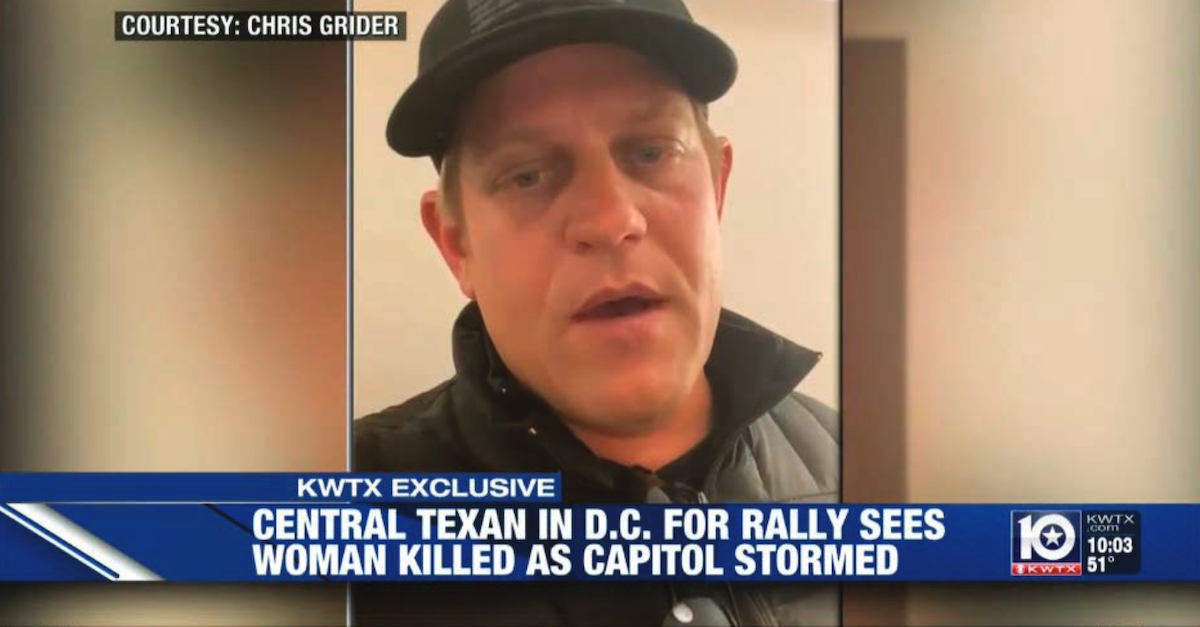 A rioter whom prosecutors claimed stood in the “front lines” trying to breach the Speaker’s Lobby during the U.S. Capitol insurrection must remain behind bars pending trial, a federal magistrate ruled Wednesday.

In issuing her ruling, U.S. Magistrate Judge Susan Hightower characterized the evidence against Chris Grider as “quite strong,” showing him to be the man who allegedly supplied the helmet used to try to break down the doors separating the mob from U.S. lawmakers.

The judge added that Grider also pushed and kick that barrier with the throng, which included rioter Ashli Babbitt, who was shot dead while trying to breach the barrier.

Before Judge Hightower issued her ruling, Grider’s defense counsel Brent Mayr told her that three of his client’s friends and associates were willing to testify that he was a religious and peaceful man—not an insurrectionist.

“My client deeply regrets being a part of it,” Mayr said.

Court papers show a much more enthusiastic Grider, seen largely in video that he provided to a local news broadcaster.

“The president asked people to come and show their support I feel like it’s the least that we can do, it’s kind of why I came from central Texas all the way to DC,” Grider told KWTX-TV News 10, a local news channel in Waco.

Grider provided the network with video footage from the siege, which is quoted in court papers with an image from the broadcast.

“They were shocked as everyone else was when the people on the other side of the door, from 20 feet away, shot her in the chest,” Grider is quoted telling the network’s reporter Rissa Shaw. “At that point we were all panicked, we couldn’t leave because there were thousands of people behind us pushing us forward.”

Appearing at the hearing in Grider’s support, Shaw did not testify in person, but she nodded along with Mayr’s summary of what she would have testified.

“What she would convey to the court was that she was overwhelmed by what was happening,” Mayr said. “He was clear. He was calm. She did not at any point believe that he was a threat to anyone.”

Shaw hardly seemed to be a dispassionate observer in the episode, expressing through Grider’s attorney that she was “incredibly impressed” with the defendant’s work when covering stories about his winery.

Court papers place Grider at the same scene with Babbitt, but the defense attorney insisted his client takes no ownership of that event.

“For the government to insinuate that he was somehow responsible for Ms. Babbitt’s death is just absurd,” Mayr said.

Assistant U.S. Attorney G. Karthik Srinivasan emphasized that the depiction of Grider as some sort of passive observer in the scene does not comport with the evidence.

“He wasn’t a peacemaker,” Srinivasan said. “He didn’t try to stop what was happen.”

Despite the support from friends and associates calling his behavior out of character, Srinivasan said: “Sometimes we can be judged and should be judged by someone’s worst moments because they can reveal what people are capable of.”

(Still image from the KWTX-TV News 10 broadcast from court papers.)