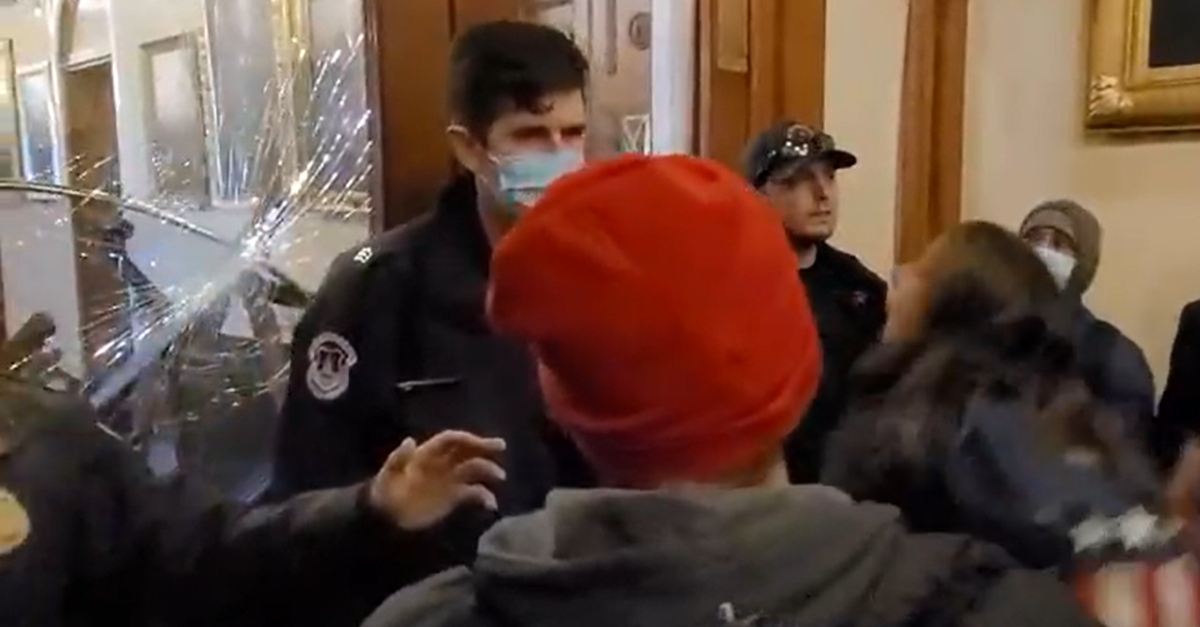 Video shot from the point of view of John Sullivan.

The man who recorded the shooting of Trump supporter Ashli Babbitt, 35, is in legal trouble himself. John Earle Sullivan, 26, of Utah, is now charged for his participation in the D.C. insurrection.

Sullivan is basically described as a cheerleader for — and active participant among — supporters of President Donald Trump as they raided the Capitol Building as Congress was certifying electoral college results for President-Elect Joe Biden.

“There are so many people,” he said in video cited by the Federal Bureau of Investigation. “Let’s go. This shit is ours! Fuck yeah. We accomplished this shit. We did this together. Fuck yeah! We are all a part of this history.”

He also is alleged to have said, “Let’s burn this shit down.”

Sullivan recorded people climbing up a wall to the Capitol. He then entered through a broken window, authorities said, “wearing a ballistics vest and gas mask.” Investigators noted that there were at least two moments where Sullivan told officers to stand down so they would not get hurt.

“There are too many people,” he said in the affidavit. “You gotta stand down. The people out there that tried to do that shit, they got hurt, I saw it, I’m caring about you.”

One of those instances was right before the shooting death of Babbitt, an ardent Trump supporter and conspiracy theorist.

“We want you to go home,” he told an officer. “I’m recording and there’s so many people and they’re going to push their way up here. Bro, I’ve seen people out there get hurt. I don’t want to see you get hurt.”

Sullivan captured the fatal aftermath. Babbitt climbed through a broken window, and a law enforcement officer shot her.

Authorities said that at one point before the shooting, Sullivan joined people attempting to open doors in another part of the Capitol. He offered to help.

Investigators said that he did not make it to the doors, but they noted that when they interviewed him later, he denied having a knife.

Sullivan is charged with obstructing law enforcement, knowingly entering a restricted building (in this case, the Capitol Building), and engaging in disorderly or disruptive conduct.