Authorities Arrest Man Who Pointed Himself Out Attacking Officers at D.C. Insurrection: DOJ 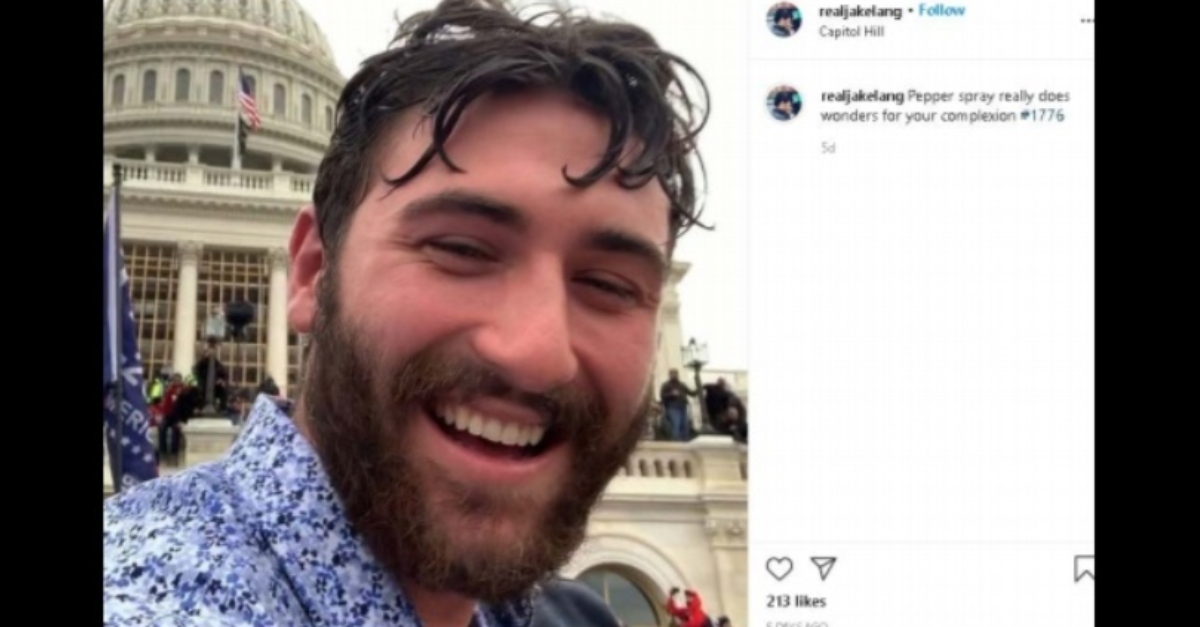 New York resident Edward Jacob Lang made no secret of his involvement in the D.C. insurrection, according to the Federal Bureau of Investigation. He posted pictures and video, proudly admitting he was there. Not only that, but he allegedly pointed himself out as one of the people attacking Capitol police. 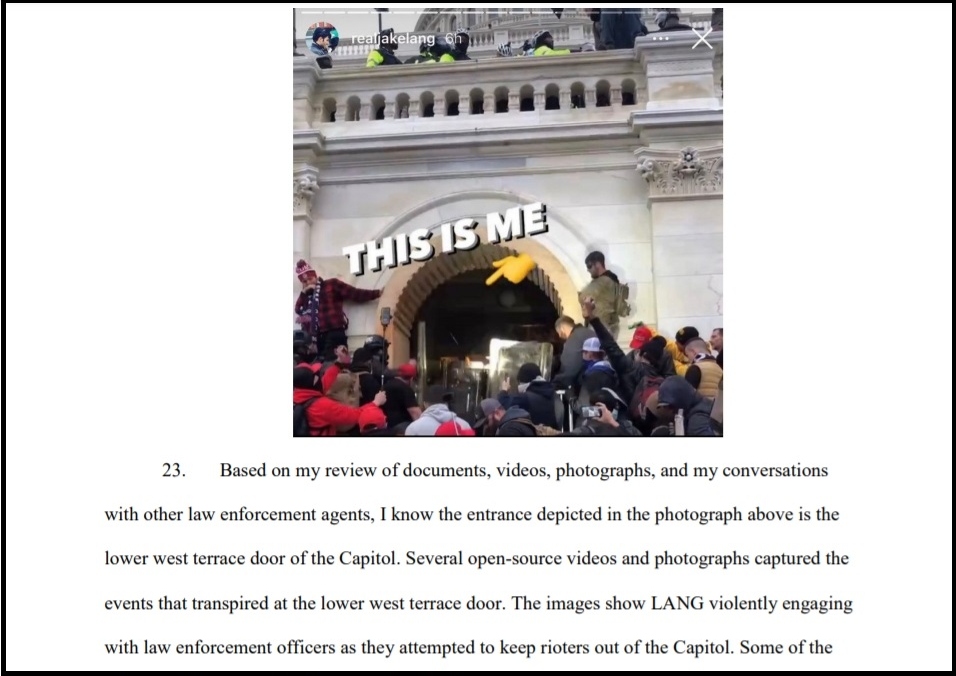 Excerpt from the affidavit.

A recording of the video story (that the screenshot depicted above apparently came from) was posted on Twitter. In the video recording, you can see an individual raising a riot shield over his head as the crowd cheers and then violently slam the shield down on the ground repeatedly near where the officers are visibly lined up. That individual is in a black jacket, MPD helmet, and gas mask consistent with LANG in the photos above and is directly below the “This is me” sign added to the video.

Supporters of President Donald Trump raided the Capitol Building on January 6 after POTUS continued to lie that he actually won the 2020 presidential election and that it was being stolen from him. Congress had been in the middle of certifying electoral college results for President-elect Joe Biden. They could only do so after authorities took back control of the premises.

Five people died amid the chaos. One Trump supporter, Ashli Babbitt, 35, was shot and killed by law enforcement as she and others were breaking their way into the Speaker’s Lobby. Two other Trump supporters–Kevin Greeson, 55; and Benjamin Phillips, 50–passed away from what D.C. Metro cops described as “medical emergencies,” but a third, Rosanne Boyland, 34. reportedly died after being trampled. The passing of Capitol police officer Brian D. Sicknick is being investigated as a possible murder. A capitol police officer, Howard Liebengood, and an insurrection defendant Christopher Stanton Georgia, 53, died by suicide in the days after.

According to the FBI, at least one witness said a group of insurrectionists said they wanted to kill House Speaker Nancy Pelosi and Vice President Mike Pence, the latter of whom snubbed Trump’s false assertion that a VP could reject electoral college results.

As for Lang, his social media activity presented him as a proud participant in crowds breaking into the Capitol.

“Pepper spray really does wonders for your complexion #1776,” he wrote in a caption cited by authorities.

“I was the leader of Liberty today,” he wrote in another post cited by officials. “Arrest me. You are on the wrong side of history.”

Video also showed him picking up a D.C. Metro police riot helmet from the ground, and wearing it, authorities said.

Footage included one in which an individual–apparently Lang–filming himself wearing a green gas mask while in front of law enforcement personnel. Another video that someone posted to Facebook showed Lang swinging a baseball bat at officers multiple times, according to the FBI.

“In doing so, LANG struck at least the shields the officers held in front of them. As the video progresses, others in the crowd assist in the attack, with some throwing items and one individual spraying the officers with a fire extinguisher,” the affidavit stated.”(This
is in addition to the actions in the videos described above where various individuals near LANG repeatedly strike at law enforcement officers with weapons as LANG is in the front with the shield.)”

Investigators said that in another video streamed to Instragram, Lang spoke with an unidentified woman, the woman asked him what he thought would happen next.

“Guns…That’s it,” Lang said in the affidavit. “One word. The First Amendment didn’t work, we pull out the Second. We’re all civilized people and we love going to work and praying to God on Sundays and having nice family barbeques…and that was every single person there. No one wants to take this and and die for our rights, but dying for our rights is the only option that any person with a logical brain sees right now. This is it.”

Law&Crime could not locate @realjakelang, the Instagram account attributed to Lang. The FBI cited a link to what was supposed to be his Facebook account, but the site currently describes this as unavailable as of Sunday.

He was arrested Saturday, said the DOJ. Charges against him include assaulting, resisting, or impeding certain officers of employees; civil disorder; knowingly entering or remaining in any restricted building or grounds without lawful authority to do; and violent entry or disorderly conduct.

ADIC Sweeney’s statement following Edward Lang’s arrest for his role in the riot and assault on the Capitol building:

We will continue to track down and hold accountable those who attempt to violently subvert (our Nation’s Constitution).

“Decisions have consequences,” said William F. Sweeney, Jr., the assistant director in charge of the FBI’s New York Field Office. “Edward Lang is in custody for the ones he made during the assault on our Capitol. FBI special agents and employees have sworn an oath to support and defend our Nation’s Constitution. We will continue to track down and hold accountable those who attempt to violently subvert it.”

The FBI asks that anyone with information call 1-800-CALL-FBI or go to fbi.gov/USCapitol.