Pro-Trump Woman and QAnon Adherent Who Carried ‘Don’t Tread On Me’ Flag Died at U.S. Capitol After Being Trampled: Report 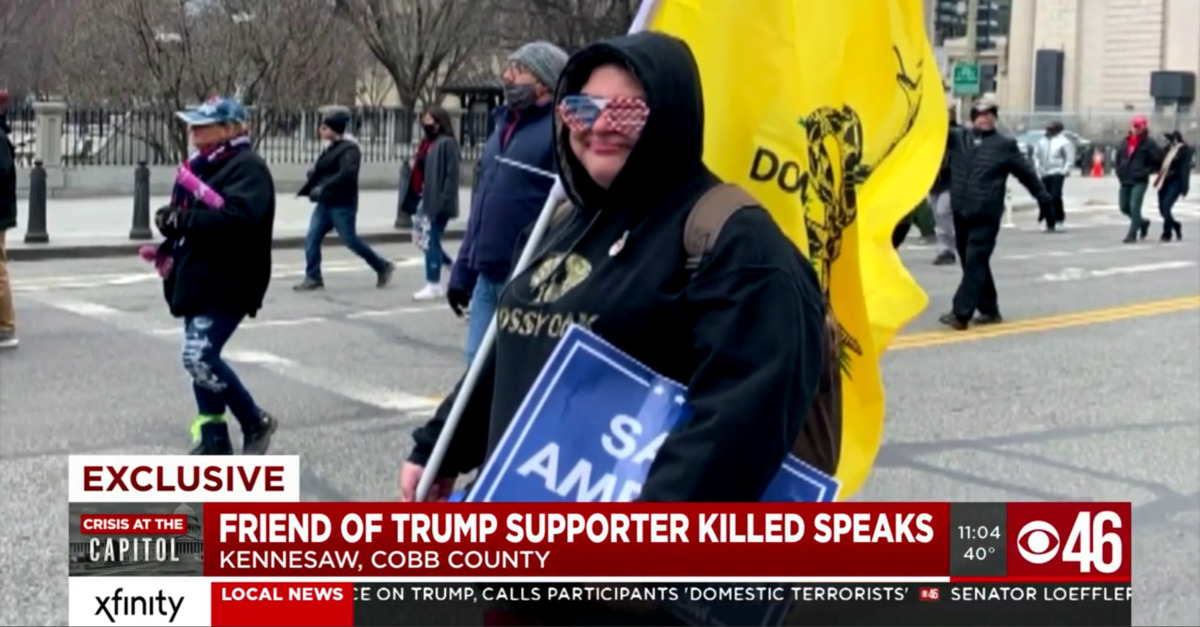 Rosanne Boyland‘s death during riots at the U.S. Capitol Complex was originally reported as the result of a “medical emergency.” New reporting, however, suggests she may have actually died being trampled to death by her fellow travelers amidst the pro-GOP mob last week.

The 34-year-old QAnon adherent and devoted fan of President Donald Trump can be seen in multiple videos of the attack just before her death.

Though the videos have circulated widely, Ms. Boyland’s presence in them had gone unnoticed until now, and the manner of her death had previously been unclear. The videos show her body on the ground just outside a door on the Capitol’s west side that was the scene of some of the day’s worst violence.

Her clothes and backpack strap in the videos match those she was seen wearing in a picture of her taken earlier that day, and two witnesses, one of whom tried to help her, gave similar accounts of her death . . .

It is unclear from the videos if Ms. Boyland was alive [just after 4:00 p.m. on January 6], but two rioters — one wielding a stick and the other a crutch — launched a new attack on the police at 4:17 p.m., making it virtually impossible for officers to give her aid, if they were able to notice her at all.

Boyland is visible in a video lying on her side in front of the door, her black hooded sweatshirt, arm and face partially visible, as men clash with police above her.

Guns were drawn. A woman was shot and killed by police, and three others died in apparent medical emergencies. A Trump flag hung on the Capitol. The graceful Rotunda reeked of tear gas. Glass shattered.

Boyland, 34, was one of three people who died of medical emergencies when a pro-Trump mob, egged on by the president, stormed the Capitol as Congress was certifying President-elect Joe Biden’s victory. A fourth person was fatally shot by police and an officer was also killed.

Capitol police have not released details about how Boyland, a Kennesaw resident, died.

The Times report is apparently news to Boyland’s family.

According to WXIA journalist Paola Suro:

Just spoke with Blaire Boyland, Rosanne’s sister, who tells me police have not updated family on what happened/ her exact cause of death. Said @nytimes story is “the most information we’ve come across so far”. They’re thankful for the journalists who worked on article #11Alive https://t.co/EYnn5wBbp2

“Rosanne was really passionate about her beliefs like a lot of people,” her brother-in-law Justin Cave told local CBS affiliate WGCL-TV. “I’ve never tried to be a political person, but it’s my own personal belief that the president’s words incited a riot that killed four of his biggest fans.”

In a notably grim case of nostalgia turning into bitter irony, Boyland was holding the popular libertarian standard known as the Gadsden flag in the moments leading up to her death. That flag, an historical callback to American Revolutionary war propaganda and Continental Navy insignia, is emblazoned with the phrase: “Don’t tread on me.”