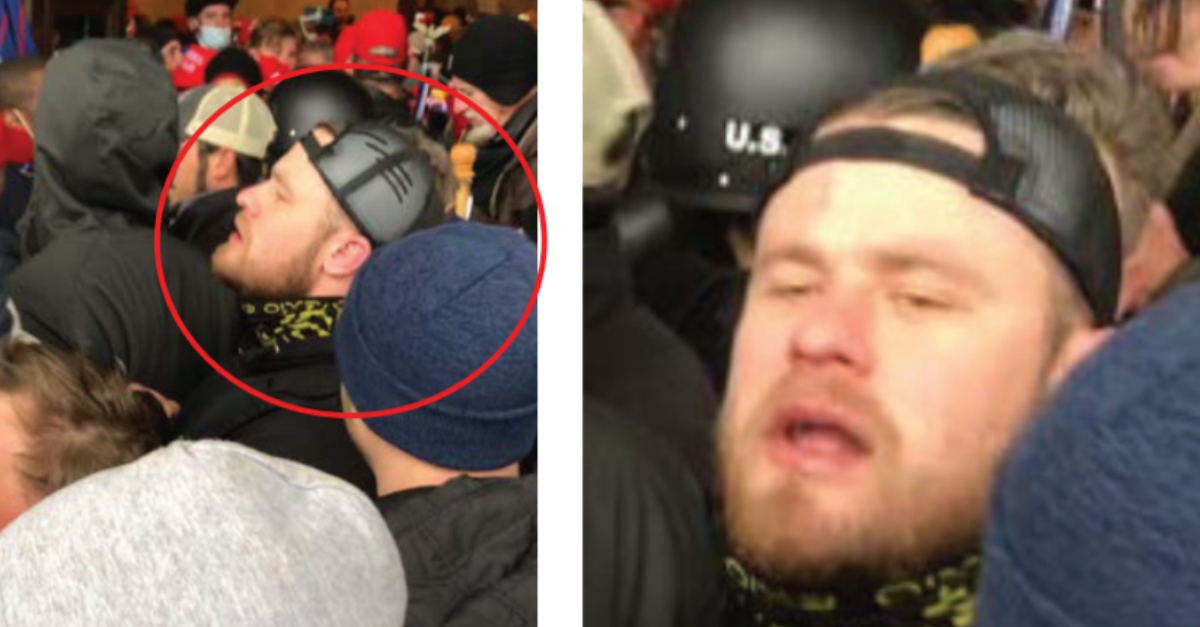 Federal authorities have announced another arrest connected to January’s siege on the U.S. Capitol Complex. Authorities are using the case against Ethan Nordean, a.k.a. Rufio Panman, who is said to be a member of the far-right organization the Proud Boys, to allege that members of his group planned to storm the Capitol Building ahead of time.

The charges were announced the same day that the Canadian government designated the Proud Boys as a terrorist organization.  The group was founded by Vice Media co-founder Gavin McInnes.  McInnes is from Canada.

NORDEAN’s posts prior to January 6, 2021, indicate that he and other Proud Boys members were planning in advance to organize a group that would attempt to overwhelm police barricades and enter the United States Capitol building.

Nordean, whom officials referred to as “the self-described ‘Sergeant of Arms’ of the Seattle Chapter of the Proud Boys,” was apparently a fervent believer in former president Donald Trump‘s debunked claims of widespread voter fraud, judging by conversations cited in the affidavit. For example, authorities said that Nordean posted a link on his Parler page leading to his video podcast. He spoke with a man identified only as Individual A.

“Democracy is dead?” said the defendant, who described himself as president of his local Proud Boys chapter. “Well, then no peace for you. No democracy, no peace.”

The self-styled revolutionary apparently carried on in that same vein through the episode. He allegedly said the Proud Boys were going to “bring back that original spirit of 1776 of what really established the character of what America is. And it’s not complacency, it’s not low standards. It’s ‘this is how it’s going to be, and I don’t give a god damn.'”

“Anyone looking to help us with safety/protective gear, or communications equipment it would be much appreciated, things have gotten more dangerous for us this past year, anything helps,” he allegedly wrote on Parler last December 27.

Other parts of the affidavit contain typical boilerplate language common among capitol siege defendants. In this case, photographs and video allegedly put Nordean in the Capitol and capture his references to it on social media. Nordean allegedly posted a picture of himself on January 8 and descried himself as a “violent extremist.” The government affiant suggested this was the defendant making light of the public criticism of the insurrection. 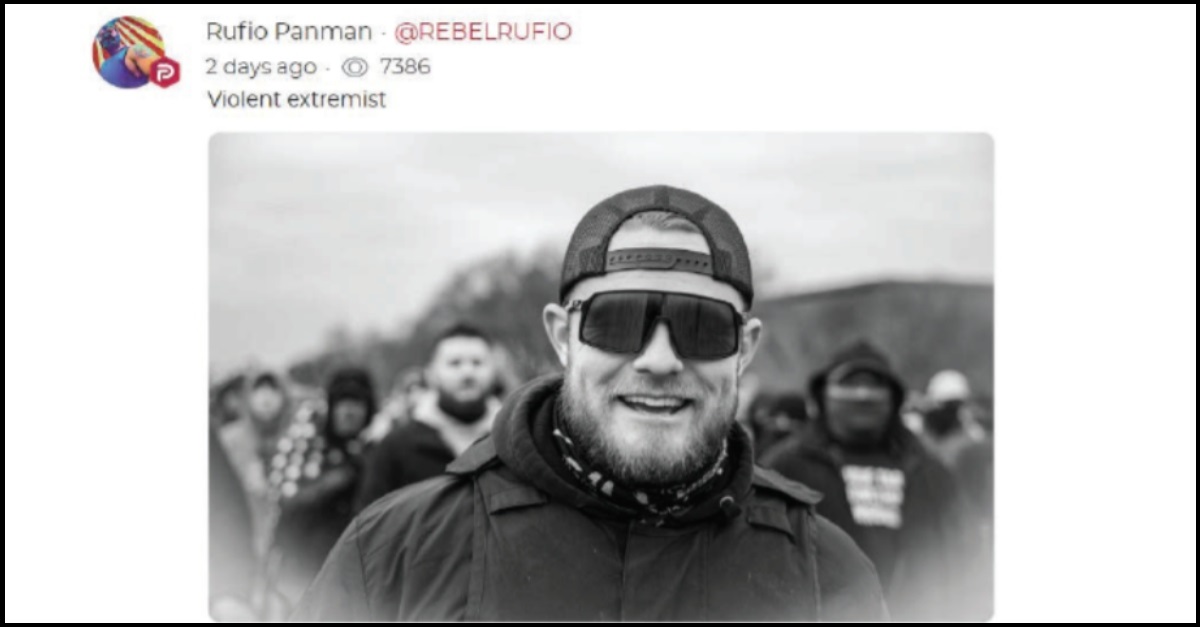 Authorities say Nordean was part of a group that overwhelmed officers manning a pedestrian gate, though he was neither of the two initial instigators. From the affidavit:

Other insurrection defendants make cameo appearances in the Nordean affidavit. Authorities note that Nordean was seen marching Jan. 6 with Proud Boys members including organizer Joseph Biggs. (The affidavit against Biggs referenced that he was with Nordean.) The Nordean documents also allege that Nordean seemed to have a brief exchange next to the Capitol with a man named Robert Gieswein, who authorities previously described as a “3 percenter.” The affidavit further references the government’s case against alleged Proud Boys member Dominic Pezzola. 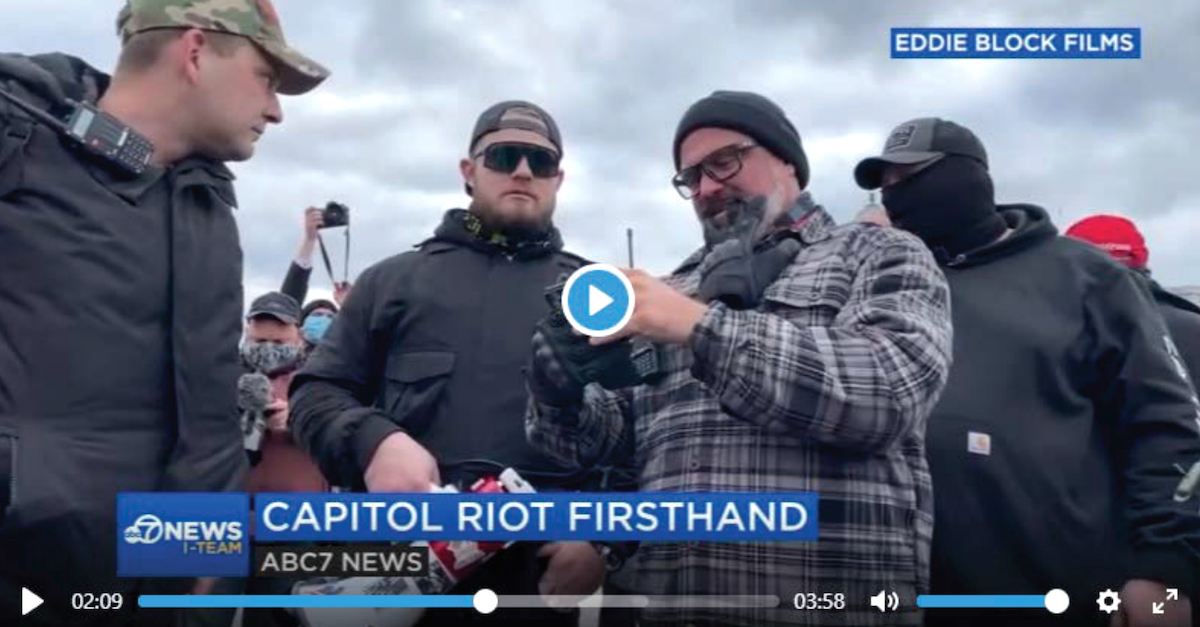 A man identified as Proud Boy Ethan Nordean, a/k/a Rufio Panman, is seen wearing sunglasses in a screen shot embedded within a federal court document. Joseph Biggs is said to be the man wearing plaid.

Nordean is charged with aiding and abetting injury or depredation against government property; obstructing or impeding an official proceeding; knowingly entering or remaining in restricted building or grounds; and violent entry and disorderly conduct. It is unclear if he has an attorney in this matter.