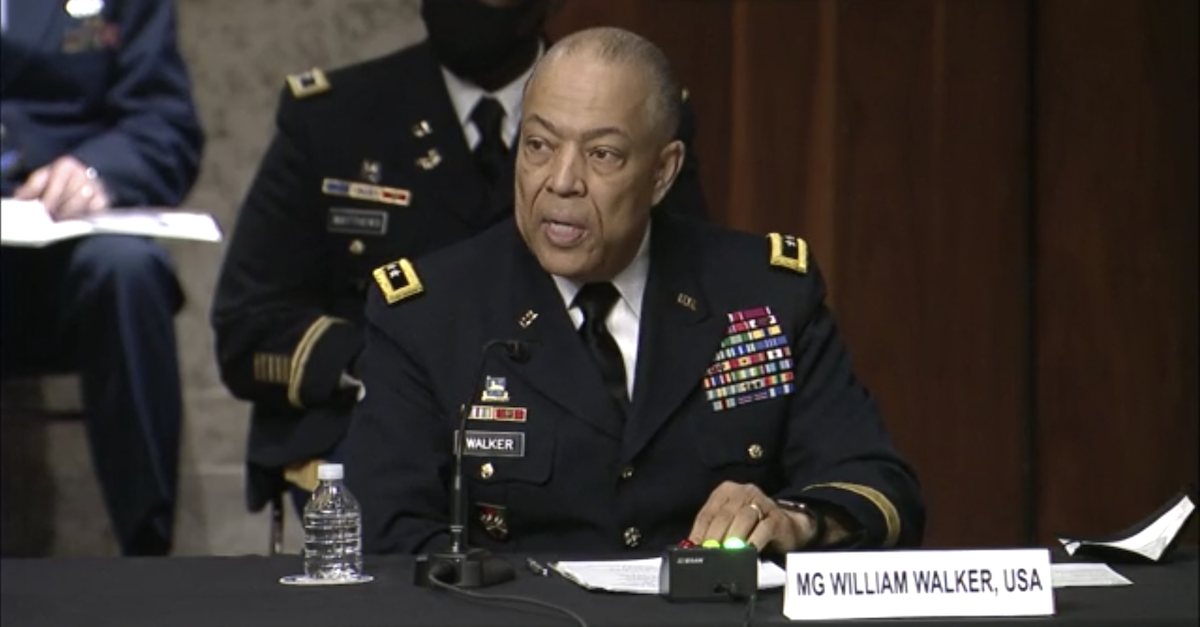 One week ago, former Capitol Police Steven Sund chief testified before two Senate committees that the assault on the Congress was premeditated and coordinated, and the follow-up hearing probed the glacial response from federal authorities after that Sund ended his “frantic” phone call with the head of the D.C. National Guard.

Immediately after ending his phone call with Sund at 1:49 p.m., Walker reported alerting the Army Senior Leadership of the request—only to have that emergency alert slow-walked.

“The approval for Chief Sund’s request would eventually come from the Acting Secretary of Defense and be relayed to me by Army Senior Leaders at 5:08pm–three hours and 19 minutes later,” Walker wrote in his prepared remarks. “We already had Guardsmen on buses ready to move to the Capitol. Consequently, at 5:20pm (in under 20 minutes) the District of Columbia National Guard arrived at the Capitol. We helped to re-establish the security perimeter at the east side of the Capitol to facilitate the resumption of the Joint Session of Congress.”

During the question-and-answer session, Senator Amy Klobuchar (D-Minn.) asked Walker about reports that help was delayed out of a concern for optics, and the National Guard commander replied that the two participants on the call who mentioned optics were Lt. Gen. Charles Flynn and Lt. Gen. Walter Piatt.

Flynn is the younger brother of Donald Trump loyalist Michael Flynn, who proposed that the 45th president impose martial law in service of his election-overturning efforts.

Robert Salesses, a senior official performing the duties of the Assistant Secretary of Defense, Homeland Defense and Global Security Department of Defense, detailed some of what happened in the interim.

“Following a call with the Mayor of DC and her staff, the Secretary of the Army met with the Acting Secretary of Defense and the Chairman of the Joint Chiefs of Staff to discuss the requests of the U.S. Capitol Police and the Mayor of DC (at approximately 2:30 p.m.),” Salesses wrote. “The Acting Secretary of Defense determined that all available forces of the DC National Guard were required to be re-missioned to reinforce DC MPD and U.S. Capitol Police positions to support efforts to reestablish security of the U.S. Capitol Complex.”

Salesses asserted that the Acting Secretary of Defense’s approval for “full activation” of the D.C. Guard came at 3:04 p.m.—more than two hours before Walker testified that approval was related to him.

On Jan. 4, Walker obtained permission Acting Secretary of Defense Christopher Miller to use the QRF in cases of “last resort,” but McCarthy overruled that a day later in a memo stating that he would “withhold authority” except in response to a request from an appropriate civil authority.

“I will require a concept of operation prior to authorizing employment of the QRF,” McCarthy wrote.

Bemoaning the fact that the Department of Defense did not send “anyone who was actually there at the time” to explain the shake-up, Sen. Portman appeared startled by the reversal.

“I also thought it was odd, and I think you said it was unusual and very prescriptive, that the Jan. 5 letter required the Secretary of the Army to approve the movement of deployed guardsmen from one traffic control point to another,” the senator told Gen. Walker. “Did you find that unusual?”

Walker responded that he had never seen that happen in 19 years, and the restrictions were so tight that day that National Guard could not move one block without the Pentagon’s permission.

Earlier in his testimony, Salesses testified that federal authorities did not predict the need for support at the Capitol complex on Jan. 6—despite public reports and open planning by Trump supporters to try to occupy the building.

“Over the weekend of January 2-3, 2021, Office of the Secretary of Defense staff, contacted the U.S. Secret Service, the U.S. Park Police, the U.S. Marshals Service, the FBI, and the U.S. Capitol Police to determine if they planned to request assistance,” Salesses said. “None of these other law enforcement agencies indicated a need for DoD or National Guard support.”

The other witnesses called by the Senate committees are Melissa Smislova, the senior official performing the duties of the Under Secretary, Office of Intelligence and Analysis Department of Homeland Security, and Jill Sanborn, the Assistant Director of the Counterterrorism Division of the FBI.

Smislova, a Homeland Security official, testified Intelligence and Analysis (I&A) issued over 15 unclassified warnings about the “heightened threat environment” and that domestic violent extremists could “mobilize quickly with little to no warning.”

Senate Homeland Security and Governmental Affairs and Rules Committees convened the joint hearing, the second in a series.

Update—March 3 at 7:20 p.m. CT: This story has been updated to include Sen. Portman’s exchange with Gen. Walker over the Department of Defense’s reversal on authorizing the National Guard’s quick reaction force (QRF).