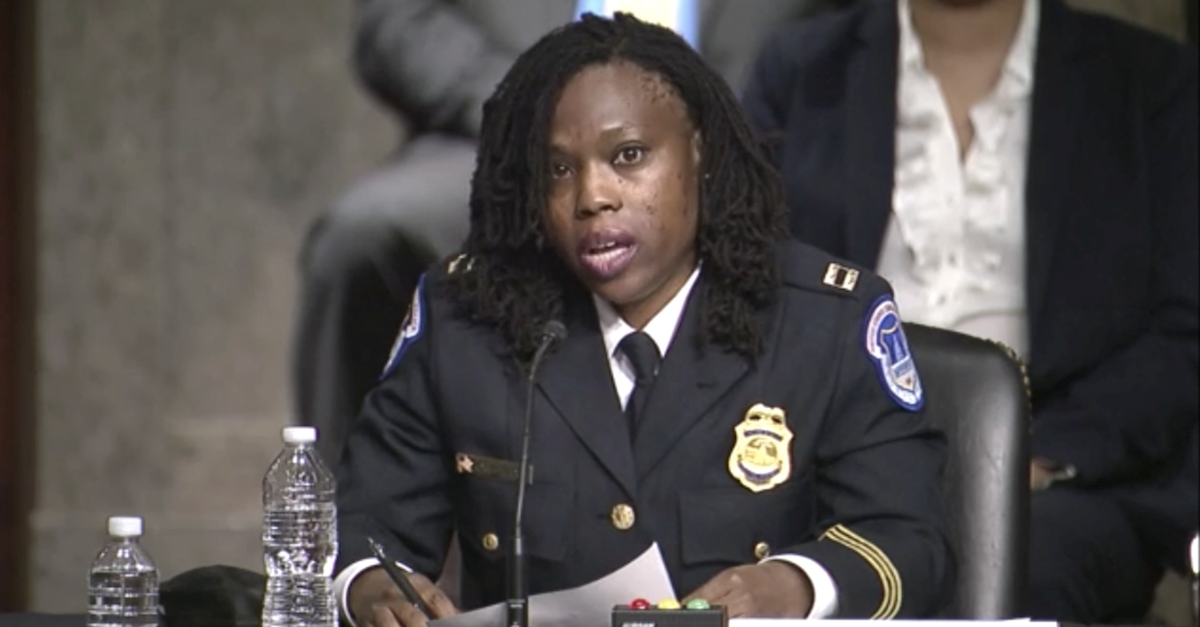 Capitol Police Capt. Carneysha Mendoza describes the smell of CS Gas and the lingering effects of chemical burns on her face in gripping testimony during the debut Senate Homeland Security Committee hearing on the Jan. 6th siege.

Police chiefs and other law enforcement leaders charged with protecting the Capitol described a “military-style” and “coordinated assault” on Jan. 6, 2021, in long-anticipated hearings before the Senate Homeland Security Committee on Tuesday.

“It has been just over six weeks since our nation watched with horror as our Capitol building was breached by domestic terrorists who sought to use violence and intimidation to overturn the results of a free and fair election,” Peters began the hearing. “This was a shocking assault on our democracy, and marked one our nation’s darkest days.”

Horrific as the images were, the videos and photographers could not capture the grisly scene as experienced by the law enforcement officers protecting Congress. Capitol Police Capt. Carneysha Mendoza described seeing a “heavy smoke-like residue” and smelling what she believed to be military-grade CS gas, adding that the odor was “a familiar smell.”

“I have received chemical burns to my face that still have not healed to this day,” Mendoza said.

During his prepared remarks, acting Metropolitan Police Chief Robert Contee III described being “stunned” by the response of the Army, which he called “reluctant” to send the D.C. National Guard to the Capitol.

“While I certainly understand the importance of both planning and public perception –the factors cited by the staff on the call –these issues become secondary when you are watching your employees, vastly outnumbered by a mob, being physically assaulted,” Contee said in his statement.

Asked about that written testimony, Contee doubled down: “I was just stunned by that response.”

Roughly a week after the Capitol siege, Contee was vocal in emphasizing that rules prohibiting firearms inside the building: even by hard right Rep. Lauren Boebert, who has refused to comply with security measures in the past and released a viral video vowing to take a “Glock to Congress.” Some of her Democratic colleagues accused her of providing “reconnaissance” tours to groups before the attack, allegations that she has denied. These allegations did not come up during today’s hearing, by press time.

Sund resigned in the immediate wake of the siege, initially scheduling his departure for Jan. 16 before actually leaving a week before that. He told the Washington Post that House and Senate security officials turned down his request for National Guard backup, claiming that former House Sergeant at Arms Paul Irving expressed concerns about the “optics” of declaring an emergency ahead of the demonstration and former Senate Sergeant at Arms Michael Stenger suggested he “lean forward” with informal Guard contacts.

Irving vigorously denied that Post report as a media creation.

“‘Optics’ as portrayed in the media did not determine our security posture; safety was always paramount when evaluating security for January 6,” Irving testified.

Stenger’s statement was silent on the explosive Post article, speaking briefly and generally about the siege.

“The events of January 6th went beyond disobedience,” Stenger testified. “This was a violent, coordinated attack where the loss of life could have been much worse.”

Sen. Amy Klobuchar (D-Minn.) began the question-and-answer session by asking the witnesses whether the violence was coordinated, included white supremacists and could have gotten much worse. All answered without hesitation in the affirmative. She noted that the hearing marked only the first session, and the second next week will include FBI and Homeland Security officials.