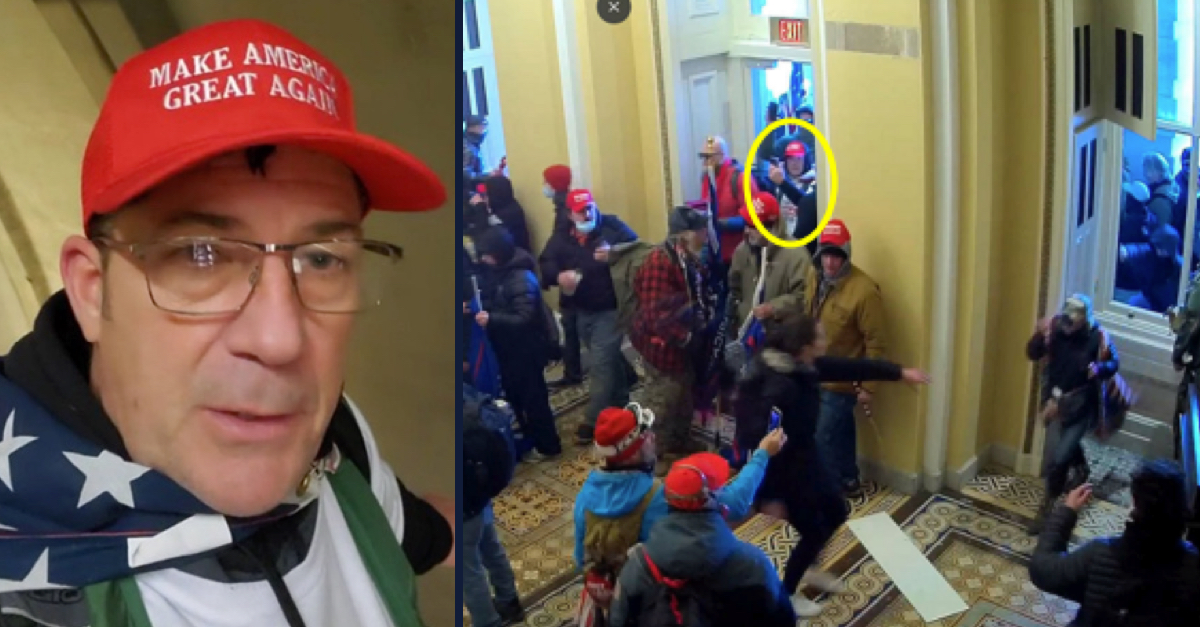 A Washington state man who recited the Pledge of Allegiance during his sentencing hearing for breaching the U.S. Capitol on Jan. 6 will spend some time behind bars, although not as much as the federal judge overseeing his case would have wanted.

John Cameron, 55, was sentenced Monday to three years of probation and 30 days of intermittent incarceration after pleading guilty in April to a misdemeanor. Cameron was among the thousands who attended then-President Donald Trump’s so-called “Stop the Steal” rally on Jan. 6, in which Trump called on his supporters to march to the Capitol building and “fight like hell” as Congress began to certify Joe Biden’s win in the 2020 presidential election.

Cameron did just that, and joined the scores of Trump supporters who breached the Capitol building, spending about 20 minutes inside. He was seen in an office suite and the Crypt before exiting the building through a broken window after being told to do so by police.

He pleaded guilty in April to one count of parading, demonstrating, or picketing in a Capitol building, a misdemeanor punishable by up to six months in jail. The statute also allows for five years of probation, but Hogan is among a handful of federal judges in D.C. who have determined that the parading misdemeanor does not allow for a so-called “split sentence” of jail time and probation.

At Monday’s sentencing, Hogan got around that issue with the intermittent incarceration aspect of the sentence. The judge ordered Cameron to serve his jail time in three-day increments, but made it clear that he believed the defendant deserved significantly more time behind bars, largely due to Cameron’s repeated statements on social media implying that he believes he is being unfairly prosecuted for his political beliefs.

“I think you’re lucky that the government has stayed with its guilty plea in this matter,” the judge said.

Cameron, who was repeatedly heard Monday responding to Hogan’s comments before the judge finished speaking, appeared to try to engage the judge in a more casual type of exchange than what is normally seen in criminal sentencing hearings.

“Do you know you my favorite president of all time is, Your Honor?” Cameron asked the judge when the time came for him to speak on his own behalf.

Hogan did not audibly respond.

“You might know a little bit about him,” an undeterred Cameron continued. “It’s Ronald Reagan.”

Cameron then described the accomplishments of his “favorite president” — ending the Cold War and “taking us out of a recession” among them — to Hogan, a Reagan appointee, before pivoting to a different tack entirely.

“I would like to recite the Pledge of Allegiance right now,” Cameron said. “Would you allow me to do that, Your Honor?”

“It’s your right to speak to the Court,” the judge replied flatly.

Cameron then went on to recite the Pledge of Allegiance.

“I pray that a truly great statesman comes to the U.S., like Reagan,” he said after finishing the Pledge.

Cameron told Hogan that he didn’t intend to participate in any violence on Jan. 6, and that in fact the entire incident — in which 140 law enforcement officers were injured as the pro-Trump mob overwhelmed police, forcing its way into the Capitol by breaking windows and doors and forcing lawmakers to evacuate or shelter in place for hours — was quite pleasant.

“When I was there,” Cameron said, “I saw Americans walking in and out in an orderly manner. I saw police who were in a little partition not doing anything.”

“I never did,” Cameron replied.

“You never heard any bells or sirens going off?” the judge pressed.

Cameron said that the only alarm he heard was a “beeping fire alarm.”

“Had there been a single law enforcement officer or law enforcement at all who said ‘Don’t go in,’ I wouldn’t have gone in,” Cameron insisted, despite acknowledging that he had walked over an upturned bike rack that had been used by police as a barrier to the crowd.

“So you thought you had a right to go into the building, without security, without permission,” Hogan said, adding a warning: “You’re getting close to withdrawing your guilty plea, I’ll tell you that right now.”

“No,” Cameron said. “I am guilty of picketing within Capitol grounds and illegal picketing. I didn’t plead guilty to trespassing. But I picketed within the Capitol and that was illegal.”

Cameron then went on to describe how the “financial cost” of his actions at the Capitol on Jan. 6 have been “incalculable,” because he has been “deplatformed” from Facebook and has relied on financial support from the right-wing crowdfunding website GiveSendGo. He also described his own “mental anguish” over being called a traitor and insurrectionist.

Hogan then spent several minutes offering Cameron the opportunity to acknowledge the violence around him at the Capitol that day, to no avail.

“You’re being willfully blind to what was going on, frankly,” Hogan ultimately told the defendant.

“I think if you had pled to a felony I’d be giving you some years in jail,” Hogan told the defendant shortly before issuing his sentence. “I don’t believe in any way you have understood or comprehended what happened that day and your part in it.”

“I don’t know how you can tell yourself you didn’t see violence, never heard any violence, that you never saw any evidence of people entering through windows,” Hogan said. “In your own prior statements … you talked about broken doors. You seem to forget that now.”

“I think you attempted to hide this from yourself as much as you can,” the judge added.

Hogan then discussed Jan. 6 defendants generally, bemoaning what he sees as a pattern of refusing to take responsibility.

“I keep hearing from Jan. 6 defendants [saying] ‘We’re being prosecuted,’ like it’s a surprise, or ‘We’re being persecuted,’ like it’s unfair,” Hogan said. “I do not understand that psychology. They’re all telling me: ‘This has really hurt me, people don’t like me since doing this, I’ve been getting nasty calls, I’ve been fired from my job.’ Or, ‘It was a peaceful demonstration I’m being prosecuted for,’ all of which is a lie.”

“What irritates me most is all of you are claiming you’re patriots,” Hogan continued. “You’re not patriots.”

“What they did was essentially an attempted insurrection against this country and the rule of law,” Hogan added.

Hogan acknowledged, however, that Cameron pleaded guilty to a misdemeanor, so his sentencing options are limited.

“If I had a different plea in front of me and more options available, I would probably put you in jail for a long time,” Hogan said.

Hogan did impose a $1,000 fine — it could have been as high as $5,000 under the statute — and noted that the defendant agreed to pay $500 in restitution toward the estimated $2.7 million in damage to the Capitol.

“You do owe very substantial back taxes, a small fortune,” Hogan reminded Cameron, noting that while it was “concerning” to the court, it was a civil matter Cameron will have to settle with the IRS.