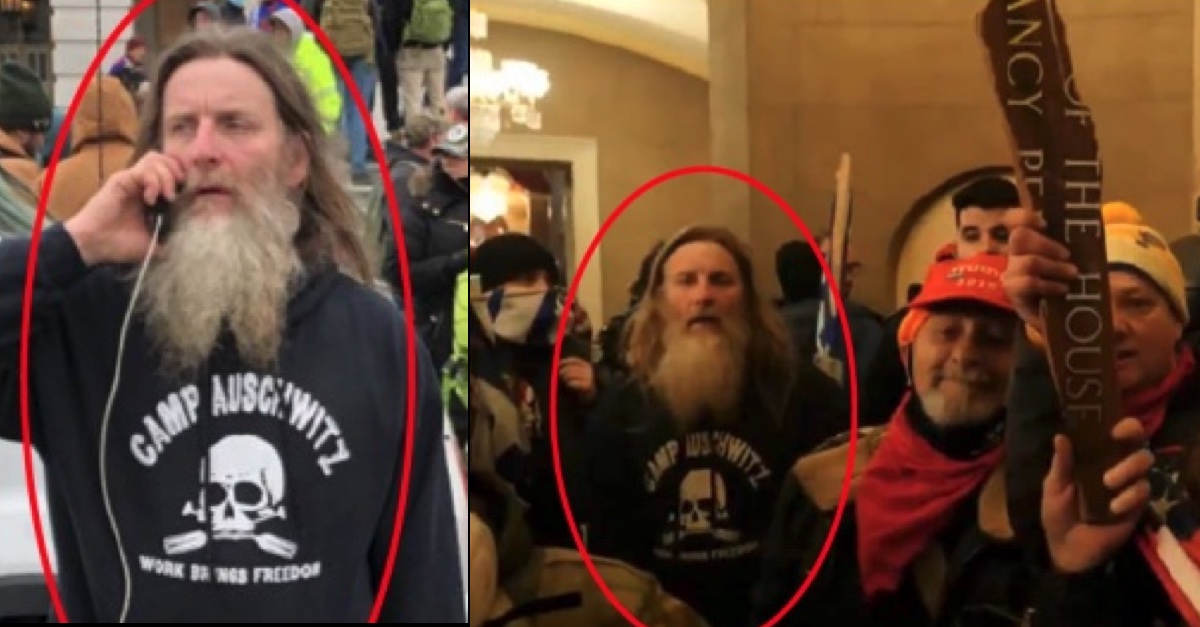 The Virginia man who wore a “Camp Auschwitz” sweatshirt to the Jan. 6 attack on the U.S. Capitol has pleaded guilty to a misdemeanor.

Robert Keith Packer, 57, was photographed wearing the black hoodie, which also bore an image of a human skull and the words “Work Brings Freedom,” as he joined the mob of Donald Trump supporters who overran police and breached the building in an attempt to stop Congress from certifying Joe Biden’s win in the 2020 presidential election.

Packer was also seen in the group of people who proudly appeared to be displaying a shard of the broken nameplate from House Speaker Nancy Pelosi’s office.

He pleaded guilty Wednesday to a single count of parading, demonstrating, or picketing in a Capitol building. The charge carries a potential six month jail sentence and a maximum possible fine of $5,000.

Packer’s hoodie makes a mockery of Nazi Germany’s systematic murder of at least 11 million people, 6 million of them European Jews. Auschwitz became the largest of hundreds of concentration camps the Nazis established in Europe in the 1930s and 1940s. A sign hung over the entry to Auschwitz read “Arbeit Macht Frei,” which is German for “Work Sets You Free.”

As Law&Crime previously reported, Packer was allegedly part of the group that moved toward the office of Senate Majority Leader Chuck Schumer (D-N.Y.), who is Jewish.

As part of his agreement, Packer agreed to cooperate with the federal government.

“Mr. Packer has agreed to talk with the FBI about the events of that day and allow the FBI to peruse any social media accounts he might have,” Assistant U.S. Attorney Mona Furst told U.S. District Judge Carl Nichols, a Trump appointee, at the hearing.

At the hearing, Furst outlined Packer’s actions at the Capitol that day. Prosecutors say Packer drove from his home in Newport News, Virginia, in order to attend Trump’s so-called “Stop the Steal” rally. He then joined the pro-Trump mob and entered the Capitol building itself, despite seeing broken windows and tear gas being deployed by police.

Furst said that Packer was in the Capitol building for around 20 minutes. He was present when a crowd of rioters breached a police line, and was part of the group that broke apart and took Pelosi’s nameplate. He also went to Statuary Hall.

“At the time the defendant entered the building, he knew that he did not have permission to enter the building,” Furst said.

The parading and picketing charge has become the predominant charge to which at least Jan. 6 defendants have pleaded guilty. Sentences have ranged from probation to the maximum six months’ incarceration. Defendants that received the six-month jail sentence received credit for time served; so far, the longest jail term for a defendant not previously detained was three months behind bars.

Packer had also been charged with disorderly conduct and knowingly entering or remaining in any restricted building or grounds without authority. Those charges will presumably be dropped at Packer’s sentencing hearing, set for April 7.