Vietnam Vet Who Brought 11 Molotov Cocktails and Other Weapons to D.C. on Jan. 6 Sentenced to Almost Four Years Behind Bars 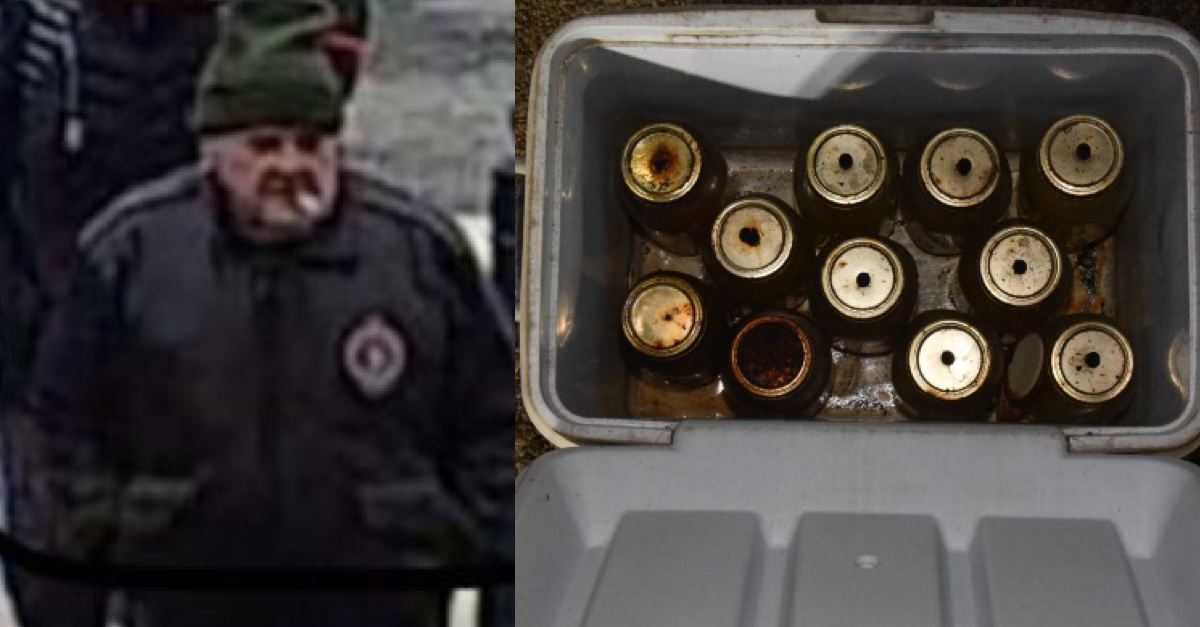 A Vietnam veteran who brought nearly a dozen Molotov cocktails to the Capitol Hill area of the nation’s Capitol on Jan. 6 has been sentenced to nearly four years in prison.

Lonnie Leroy Coffman, 72, had admitted to driving from his home in Alabama to Washington in a truck loaded with what U.S. District Judge Colleen Kollar-Kotelly called a “small armory” of weapons. Coffman pleaded guilty in November.

Coffman arrived in Washington days ahead of Donald Trump’s so-called “Stop the Steal” rally. According to Coffman’s handwritten letter to the court, he was there to “try to discover just how true and secure was the election on Nov. 3, 2020.”

Kollar-Kotelly, a Bill Clinton appointee, noted multiple times during the hearing that she still had not received an explanation as to why Coffman needed so many weapons and explosives for his investigation.

According to court documents, Coffman had several loaded firearms within arm’s reach of the driver’s seat, including a 9mm handgun in the front right passenger seat, a rifle, and a shotgun.

“Also inside the pickup truck and in its covered bed were hundreds of rounds of ammunition, large-capacity ammunition feeding devices, a crossbow with bolts, machetes, camouflage smoke devices, a stun gun, cloth rags, lighters, a cooler containing eleven mason jars, and other items,” a court document outlining Coffman’s offenses said.

Police also found handwritten notes in Coffman’s wallet that day that included a list of individuals identified as either “good guys” or “bad guys.” A federal judge was listed on Coffman’s “bad guys” list.

Other handwritten notes included contact information for a militia group in Texas known as the “American Patriots.” Coffman was previously known to law enforcement as an area of Texas known as “Camp Lonestar,” where militia groups would gather and, according to prosecutors, “patrol the border looking for illegal aliens.”

According to prosecutors, a government explosives expert determined that Coffman had items that could be used in Molotov cocktails—specifically, melted Styrofoam and gasoline—that would have the “effect of napalm insofar as it causes the flammable liquid to better stick to objects that it hits.”

Kollar-Kotelly noted that Coffman, who voluntarily enlisted in the army in 1968, had served two tours in Vietnam.

“He knows what napalm can do,” the judge said.

Coffman had parked his truck near residences and office buildings. According to his letter, he had “realized just how unrealistic it was for [him] to think [he] could get close enough to anyone who would even listen to [him]” and decided to walk around the “outskirts” of the event. He did not join the riotous crowd of Trump supporters that overran police at the Capitol and breached the building in an effort to block Congress from certifying Joe Biden’s win in the 2020 presidential election.

But his actions were nonetheless dangerous, Kollar-Kotelly said.

“He has almost a small armory in his truck ready to do battle, and I still don’t have an explanation why [he] would want all of this,” she said.

Police had initially noticed Coffman’s truck during a sweep of the block where was parked, close to the Capitol. According to court documents, law enforcement were searching the area following reports of possible explosive devices found outside the headquarters of both the National Republican Committee and the Democratic National Committee earlier that day. Although pipe bombs were later found in front of both buildings, Coffman was not considered a suspect.

At the end of the hearing, Kollar-Kotelly appeared to offer words of encouragement to Coffman, who had appeared via video from jail.

“Mr. Coffman, I’m sure that I will not see you again in court,” she said. “I think you’ve learned your lesson.”

“You obviously have family,” she reminded Coffman, who has two adult children, two sisters, and an ex-wife with whom he has maintained an amicable relationship. “From my perspective, you still have a life ahead of you that you need to forge and figure out what to do. Don’t shake your head. You still do.”

The sentence is at the top of the range that was included in the plea agreement, although Kollar-Kotelly determined that range was calculated incorrectly. Instead of a range of 37 to 46 months in prison, as the plea deal contemplated, Kollar-Kotelly said that the probation office’s recommendation of 46 to 57 months was the proper guideline.

Coffman’s lawyer, Manuel Retureta, had requested no jail time and a sentence of probation only, along with physical and mental health evaluation and treatment.

It appears that Coffman will receive that treatment anyway, as Kollar-Kotelly recommended Coffman, who has numerous health issues, serve his sentence in the Butner federal medical facility in North Carolina.

According to a review of sentences issued in Jan. 6 cases, Coffman’s appears to be the third-longest sentence issued in convictions pursuant to plea agreements. Robert Palmer was sentenced to 63 months after pleading guilty to assaulting, resisting, or impeding officers using a dangerous weapon, and Duke Wilson is serving 51 months for assaulting a law enforcement officer during the riot.

Coffman, who has been in custody since his arrest on Jan. 6, 2021, will get credit for time served. After serving his prison sentence, he will spend three years on supervised release.