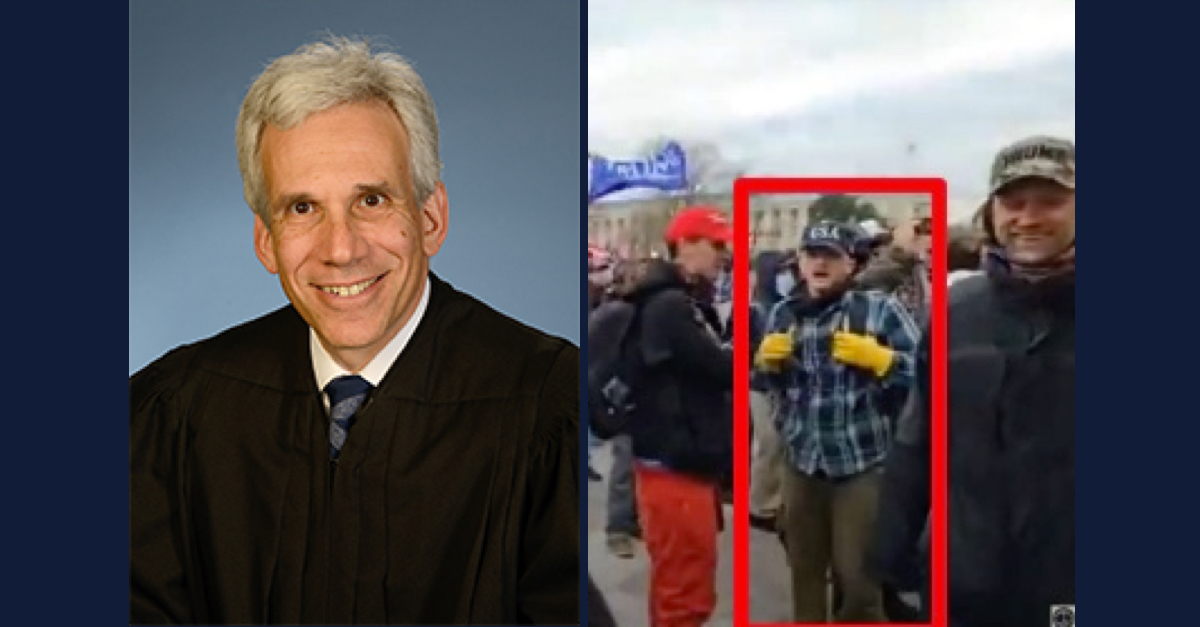 Cutting short what was scheduled to be a U.S. Marine’s sentencing for the U.S. Capitol breach, a federal judge grappled with a key legal issue that could affect numerous Jan. 6 cases.

U.S. District Judge Randolph Moss, a Barack Obama appointee, was set to sentence Micajah Joel Jackson, 26, on Thursday. Jackson pleaded guilty in November to one count of parading, demonstrating, or picketing in a Capitol building, a misdemeanor punishable by up to six months in jail and a maximum $5,000 fine.

Prosecutors had requested a sentence of 60 days in jail followed by 36 months of probation, a so-called “split sentence” that has presented an increasingly urgent legal issue to judges as more and more Jan. 6 defendants are sentenced.

The government has argued that the federal probation statue created a carve-out that would allow split sentences for petty offenses. In the alternative, prosecutors have argued that a judge can issue a sentence of intermittent confinement as a condition of a longer probation sentence, a path that some judges have already chosen to take.

So far, though, judges are split on the legal issue, and Moss, acknowledging that it is a “difficult question,” said that he wants more time and additional briefing from the parties before making a decision.

“This Has Become His Brand.”

On Jan. 6, Jackson was seen inside the Capitol building, walking through Statuary Hall, joining the crowd in chants, and standing with the crowd outside the House chamber. Although he verbally confronted police officers outside the building—taunting them with repeated shouts of “Oathbreakers!”—he was not accused of engaging in physical violence or property destruction.

But according to prosecutors, Jackson’s post-Jan. 6 actions are of grave concern.

“Mr. Jackson is unique among Jan. 6 defendants in the sheer prolific nature of his public exposure,” prosecutor Sean Murphy said, referring to Jackson’s numerous media interviews and online postings minimizing what happened at the Capitol that day, when hundreds of Donald Trump supporters formed a violent mob that overran police to breach the building and stop Congress from certifying Joe Biden‘s win in the 2020 presidential election.

Murphy said Jackson used Jan. 6 “as a springboard to build his brand of ‘false-flag’ conspiracy theories” and to insist that he is a “political prisoner and being persecuted.”

Murphy said that Jackson’s actions, including giving an interview to a right-wing website in which he went through the government’s sentencing memorandum, contradict his expressions of remorse in the letter he submitted to the court. Jackson said he would “humbly accept any sentencing the court decides that fits my punishment.”

“Micajah Jackson has done nothing to back down or help heal the damage” from Jan. 6, Murphy said. “He has insisted on digging his fingers into the wound and continue ripping it apart.”

Jackson’s lawyer Maria Jacob said that the majority of Jackson’s comments are constitutionally-protected speech and “do not have any bearing on Jan. 6 or his acceptance of responsibility.”

Murphy said that while Jackson’s comments may not be an actionable crime, a judge can consider them when fashioning a sentence.

The sentencing hearing will resume on March 24.